Thornberry Won’t Run; A ‘Great Loss At A Critical Time’ 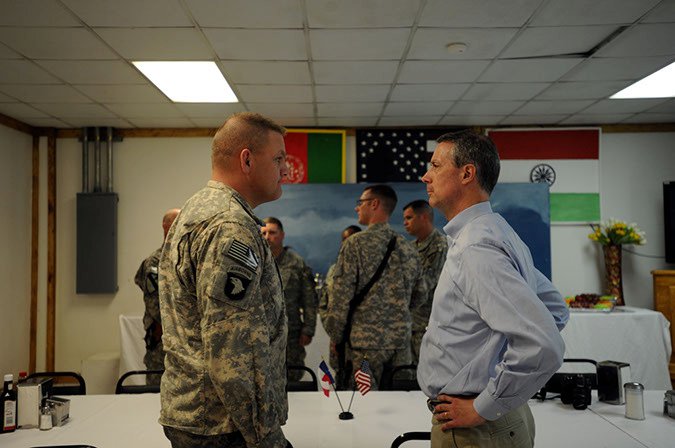 WASHINGTON: The retirement of Rep. Mac Thornberry, the seasoned and deeply knowledgeable ranking Republican on the House Armed Services Committee, removes a major player in the House who has long been a leader in fighting for acquisition reform, increased military budgets, and an overhaul of the Fourth Estate, the Pentagon’s massive bureaucracy that manages back office tasks.

“With over a year to go, I will continue to represent the people of the 13th District to the best of my ability, Thornberry said Monday in a statement announcing his decision not to run for reelection in 2020. “Our nation faces many difficult challenges, and none of us can relax our efforts to meet and overcome them, whether at home or around the world.”

The 61 year-old Thornberry has served as the HASC’s ranking member since the Democrats took the House in 2018, and was chairman of the panel from 2015 to 2018.

“This is truly a great loss at a critical time,” Bill Greenwalt, former deputy undersecretary for industrial policy told me. “I had been asked in the past about who was going to keep management reform efforts on track once Senator McCain passed away and I always considered things would continue to be in good hands with Rep. Thornberry.”

Thornberry worked closely with McCain on acquisition reform, and “not everyone understood the necessity of major changes to the acquisition system to do that, but he did,” Greenwalt said.

In his time as chairman, and then as ranking member, Thornberry forged a strong bond with current Chairman Adam Smith. The two often appeared on panels together and respectfully, and sometimes comically, disagreed during HASC hearings about the US nuclear arsenal and other big-ticket spending items. They also found much common ground, working together on acquisition reform-related issues and slamming the Pentagon’s acquisition system as being too slow to field new military technologies quickly enough.

Smith gave testimony to that relationship on Monday when he said in a statement he has “always been impressed by [Thornberry’s] intelligence and tenacity,” and “thanks to Mac’s leadership, during the 115th Congress we focused on acquisition reform and accountability at the Pentagon. Together we have passed smart reforms that give our men and women in uniform the resources they need to make our country safer.”

He added, “I am glad to have counted him a colleague and will always call him a friend.”

His perch allowed Thornberry to become one of the most vocal critics of the 2011 Budget Control Act — though he voted for the bill — which slapped limits on federal budgets in an attempt to control growing deficits. He slammed the arbitrary ceiling it placed on annual defense budgets as being harmful to military readiness, and used a string of deadly accidents like aircraft crashes, ship collisions and other mishaps as examples of what happens when training and maintenance budgets are cut.

Thornberry is the sixth Texas Republican to announce his retirement this year, although his solidly conservative district has little chance of switching hands in next year’s pivotal elections. Three other HASC — Reps. Rob Bishop, Mike Conaway, and Paul Mitchell, will walk away next year. Potential replacements for Thornberry as Ranking Member — or chairman if Republicans retake the House in 2020 — include Joe Wilson and Mike Turner.