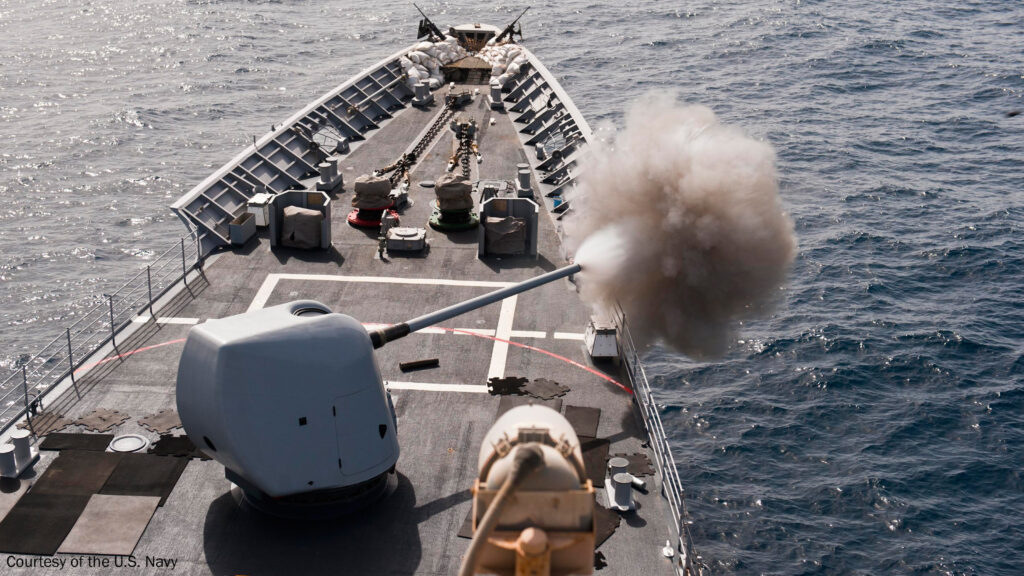 Yesterday, prominent defense commentator Loren Thompson wrote an article in Forbes extolling the technology Daniels works on, precision-guided cannon shells — particularly the products of BAE Systems. But Daniels doesn’t work for BAE. He works on Raytheon’s Excalibur smart round, fired 800 times in anger in Iraq and Afghanistan but mentioned zero times in the Forbes article. Having followed Excalibur with interest for years, I reached out to Daniels to balance the scales.

“I disagree…that BAE would have some sort of advantage,” Daniels told me this morning in the Raytheon booth at the Surface Navy Association conference. Yes, BAE is building Navy cannons and advanced projectiles to fire from them (and I’m working on a story about them too). But Raytheon argues Excalibur’s track record with the Army is longer.

“It’s one of those rare instances where you’ve got a proven — combat-proven — production program that can be leveraged by another service,” Daniels told me. “[Other systems], they’re not anywhere near as real as this is.” 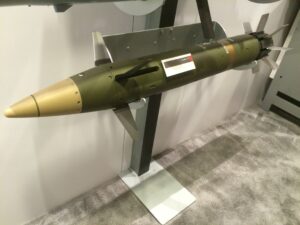 Excalibur has been in service with the Army since 2007. Some 7,000 of the initial Excalibur 1A model have been built. The upgraded, longer-ranged 1B model entered full-rate production in 2014, with the price dropping to $68,000 a shot, much less than guided missiles. Lately, Raytheon has successfully test-fired its Excalibur N5, redesigned for the Navy’s standard Mark 45 gun.

Obviously, the Army is not the Navy and a 155 millimeter howitzer is not a 5-inch (127 mm) naval cannon. (Interestingly, both weapons are built by BAE). But the land and sea versions of the Excalibur are 70 percent the same, Daniels told me. The software is 99 percent identical. The guidance & navigation unit (GNU) that goes on the nose of the shell is 100 percent identical. In fact, Raytheon’s September live-fire test of the N5 used a guidance kit pulled right from ts existing assembly line for the 1B.

The guidance kit is the hardest part of precision-guided artillery, Daniels said, because you have to make electronics that can still function after being literally fired out of cannon. That shock imposes about 15,000 times the force of gravity from an Army 155 mm howitzer: the Navy Mark 45 imposes slightly less.

Once Excalibur’s out of the barrel, guidance fins pop out of its base. The shell starts in a standard ballistic trajectory but then levels out and flies like a missile, until it reaches the target and turns nose-down to dive-bomb it. As a result, it is both more accurate and longer-range than traditional artillery projectiles.

Cutaway of the Excalibur N5

With today’s unguided shells, the Navy’s Mark 45 can, in theory, fire 13 nautical miles, but in practice it becomes too inaccurate for targets beyond eight nm. The Excalibur N5 would hit targets with precision at 20 to 26 nautical miles — roughly triple the range — depending on which variant of the Mark 45 is firing it. (Longer barrels allow longer range).

That’s still a lot shorter than the 60 nautical miles BAE claims for its rocket-boosted artillery rounds, Daniels acknowledged. But because Excalibur doesn’t have a rocket booster — it relies purely on gunpowder to propel it — it’s many times cheaper, he said. (He didn’t give precise figures, but remember the Army Excalibur cost is down to $68,000, and the Navy N5 version would be 70 percent the same).

With a 26 nautical mile range, the navalized Excalibur doesn’t solve all the Navy’s problems, nor does Daniels pretend it does. Longer-ranged and more expensive guided missiles are still necessary to engage distant warships, incoming aircraft, and enemy missiles. But the smart cannon can make a big difference in two missions: hitting land targets in support of troops ashore; and destroying fast attack craft (FAC) before they can get close enough to fire their missiles.

“Countering fast attack craft, that’s really the niche where the Navy’s got this capability gap,” Daniels said. “Right now there’s no way to stand off and shoot them first before they shoot you.”

Many nations have attack boats that can launch anti-ship missiles from 15-20 nautical miles out. That’s beyond the range of unguided naval gunfire — but using high-end long-range missiles against large numbers of small craft is grossly inefficient.

GPS guidance isn’t adequate against a rapidly maneuvering missile boat, so Raytheon is adding alternative seekers. It’s already tested a laser-guided Excalibur, but that method requires some kind of spotter to approach the enemy closely — in naval tactics, typically a ship-launched helicopter — to hold the laser designator on the target. So Raytheon’s next step is a millimeter-wave seeker, which would make the Excalibur a “fire and forget” weapon requiring no outside guidance once launched.

When does all this reach the fleet? That’s a good question both Raytheon and its competitors are asking. The service is putting a high priority on making its surface ships more lethal, but most attention has focused on missiles. Then there are futuristic weapons such as railguns, which are advancing rapidly but which only a handful of existing ships have the electrical power to fire. By contrast, there are a hundred Mark 45 guns in the fleet — and they’re going to be around a long, long time.

“It’s now a year-and-a-half since the Navy did a request for information on a 5-inch extended range projectile [in May 2014],” said Daniels. “We’re all going to be asking… ‘what are your plans?'”