US, Allies Must ‘Stop Fixating’ On ISIL & Friends; ‘Frankly, We Are Losing’ 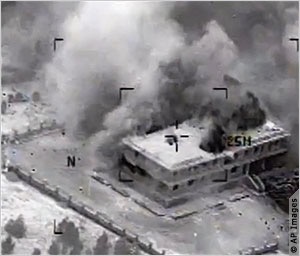 Western democracies and their military instruments of power are struggling with what seems to be the novel and dangerous apparition of radical global extremism. This headline-grabbing new threat, whether called the Islamic State, Muslim Brotherhood, Al Qaeda, Boku Haram or something else, captivates both our military’s and the public’s attention.

Yet for all the emphasis on dissecting and describing our latest adversarial form as if they were new butterflies to be cataloged for our collection, there is little critical inquiry into the much larger problem. Despite the massive economic, informational, technological and professional military advantages in the United States and our allies, we continue to stumble and fail in accomplishing any of our major foreign policy objectives. Our coalitions have racked up impressive kill and capture statistics while hardly stemming the tide of fresh suffering and conflict. Frankly, we are losing, and we may continue to lose as we pursue the new rising star of radical Islam, the Islamic State through our own imposed state of confusion.

The United States is not alone, with Canadians, the UK, Australians and other military apparatuses and intelligence agencies targeting both the terrorist threats as well as our traditional nation-state rivals. But we’re looking at the US military and its political oversight in this piece.

Americans are technical rationalists, and our devotion to this philosophical outlook is part of the reason why we continue to move towards military failure and not success. There are many political, organizational, and cultural layers that obscure and confuse why we have seen military failure in Iraq, the pending failure in Afghanistan, and general failure across the Middle East and Africa.

As ‘technical rationalists’, we think that reality can be objectively and analytically measured and controlled within universal principles and techniques. We use the increasing power of technological development to sweep away the fog and confusion of complexity, always with the implication that today’s problems can be solved by tomorrow’s innovation. Carl von Clausewitz is held in high regard in American military doctrine, yet as technical rationalists we also philosophically expect that the technological advances of today should have easily dispatched the fog and friction from prior wars. Paradoxically, today’s fog and friction will be eliminated once we steer technological investment towards gaining tomorrow’s advantage. It begets a vicious cycle.

Our belief in scientific progress and linear relationships makes complexity a wild beast that we continue to learn more about, leading to the illusion of greater control day by day. General Westmoreland, Army Chief of Staff in 1969, foresaw this: “I see battlefields on which we can destroy anything we locate through instant communications and the almost instantaneous application of highly lethal firepower.”

In a recent Army War College speech, Deputy Defense Secretary Bob Work echoed this: “Since World War II, American military strategy and our entire national defense strategy has been built upon an assumption of technological superiority.” He prefaced this with the acknowledgement that, “I am often accused of being too technologically oriented.” The United States and the larger NATO community is largely guilty here too. We have all become technical rationalists, and view warfare in a singular, limited manner.

We develop greater technological processes, tighten our military methodologies and rapidly cultivate any tactical success into mass-manufactured applications for all war theaters. We ignore our organizational form and how it might be our own worst barrier for accomplishing our strategic foreign policy goals. Western military institutions, nested within governmental structures, are entirely shackled to the centralized hierarchy. Improvements in technology and information such as metadata, near-instantaneous analysis and transmission of information around the planet has caused our centralized hierarchical organization not to soften or become flexible. Instead, it is increasingly rigid and incapable of adapting to the emergent directions that modern 21st century human conflict is moving towards.

The latest Army capstone document on development through 2030, “Win in a Complex World,” myopically believes the Army’s advantage over all possible future enemies will “depend in large measure on advanced technology”, and innovation merely “drives the development of new tools or methods…to stay ahead of determined enemies”.  Or, as Robert McNamara once précised: “Where is your data? Give me something I can put in the computer. Don’t give me your poetry.”

Within our US defense spending, training and doctrine, we continue to see the institutional preference for near-peer conflict preparations against conventional rivals such as Russia or China. In other words, our centralized hierarchical structure seeks out compatible centralized hierarchy structured adversaries that we can fight in a more predictable and thus seemingly less complex environment. Our Division and Corps-level warfighter simulations and training scenarios fixate longingly on surrogate “near peer threats” that happen to have a couple of the irregular terror group bells and whistles thrown in.

At fundamental organizational levels, our entire defense community (our Anglo-Saxon allies, NATO, and others) downplays what emergent rivals such as the Islamic State do in conflict environments, and often we intentionally shoehorn them into our conventional structures so that our entire analysis and explanation apparatus continues to churn out reliable metrics. It is not that we are over-estimating what the Islamic State is capable of, but that we are misapplying our traditional way of viewing conflict and reality upon groups like ISIL and expecting our misplaced strategies to somehow work.

So, we expect targeted strikes and network analysis to work as well upon the Islamic State in Syria or Iraq as they should against a Russian threat in the Ukraine or a Chinese one off the coast of Taiwan. Our inability to acknowledge non-centralized hierarchies or hybrids is one part of the problem. Our refusal to deviate from our own strict centralized hierarchical structure is the other.

Like the military hierarchy, our political and governmental one is a tangled bureaucracy of power, influence, and control. Postmodernist philosophers Deleuze and Guattari likened these rigid structures to how trees form branches and root systems that are strict hierarchies, regardless of how intricate the system becomes. Unlike the rigid trees, a contrasting decentralized structure looks more like potato roots, and are rhizome-like in how they lack this centralization. The Islamic State is not a potato, but they are not the tree forms that our defense community demands that they be either.

Just as social networks and decentralized processes build things from online encyclopedias to tailored navigation systems and novel media constructs, the decentralized content and form for the greater Islamic State movement (perhaps a movement even beyond the control of any single group) resists playing by the rules set by centralized hierarchies. The problem about a rival that works more like a potato root is that all the technology, money, weapons, and training that a military pours into fighting tree forms will not translate into destroying potato roots. They require different ways of thinking and organizing, with dissimilar strategies that make rigid hierarchies uncomfortable.

The western defense apparatus and subordinate military organizations are largely fixated on single linear approaches to military strategy and foreign policy objectives. Any adjustment at a fundamental level would cause a catastrophic “tipping of apple carts” across all levels of the towering centralized hierarchies. We are speaking of dramatic transformation and innovation, which will not occur quietly or in an orderly fashion. In order to defeat unexpected and confusingly new rivals such as the Islamic State, our defense apparatuses need to transition into hybrids where the centralized hierarchical form is tempered.

In the command processes and professional structures that create generation after generation of warriors that tacitly reinforce and defend the centralized hierarchy, this sort of change will be near impossible. It requires the awakening of a senior level of defense leadership at the right moment, with the strength and agility to purge what will inevitably be multiple generations of those still shackled to the centralized hierarchical form. Those that prosper under the traditional form will find it most hard to abandon, as change ushers in uncertainty and the greater potential for loss of power and prosperity for those expecting it under the current form.

Traditional rationalists and those proclaiming an entirely objective world that might be analyzed enough to control even in war will declare the postmodern deconstruction movement irrelevant. Postmodernists similarly decry the folly of functionalists — yet a hybrid approach both to content and to form would shift our defense apparatus philosophically towards a blending of the centralized and decentralized hierarchical structures.

When our strategies, actions, and entire professions gain truly nonlinear and innovative content and form, we will be able to decide and out-think, out-act, and out-adapt our rivals. To accomplish this requires the wholesale development of novel and often untested defense organizational formats and methodologies. The untested nature will sour those that demand an entirely objective process complete with analytics and testable data. Yet the same processes about to be used against the Islamic State have not worked very well in Afghanistan, Iraq, Africa and elsewhere. The current system broke down years ago, yet we continue to lurch it forward through traditions, socially constructed methodologies, and the illusion of progress.

More resources, and more importantly, human lives are about to be committed in order to halt the advancement of the current significant threat known as the Islamic State. While the processes, technology, and professional military methodologies have produced prior tactical successes, they have not produced any strategic ones in at least a decade of continuous war.

What might it take to transform an institution from a linear and traditional form into something it not only will resist, but that possesses the very institutionalisms to blind the current crop of leaders so they do not realize options that exist beyond their own gates? To create a hybrid defense apparatus that truly embraces nonlinearity, multiple paradigms, innovation, and emergence in war, our leaders must awaken.

We must stop fixating on threats like the Islamic State. They are not the same sort of rival that Russia, China and others have the potential to be. We also must cease treating groups like the Islamic State as if our centralized hierarchical tools and processes will work just fine against them. We must transform the way we think, the way we form strategies, and the way our US military educates and trains. We cannot see a world only of trees, nor fixate upon fields of threatening potatoes. We must become agile farmers, able to work with hybrid forms of tree-potatoes, and deal with ever-more complex adaptations around the corner.

Ben Zweibelson, a veteran of Iraq and Afghanistan, recently retired from the US Army. He is pursuing his doctorate at the Australian National University and is course director of the Design Program at US Special Operations Command’s Joint Special Operations University.