UPDATED with crash report WASHINGTON: One day after the first-ever combat airstrike by an F-35 Joint Strike Fighter, the Pentagon and prime contractor Lockheed Martin announced a new $11.5 billion contract for the next lot of fighters that brings the price of the Air Force model, the F-35A, down below $90 million apiece for the first time.

Of course, we knew the deal was extremely close because a so-called handshake agreement had already been announced during the Farnborough Air Show in mid-July. But today’s timing is so tidy, and the press blitz so broad, that a skeptic might wonder if the strike planning and contract negotiations were coordinated.

UPDATE: What was definitely not planned is the crash this morning of a Marine F-35B during a training flight out of Marine Corps Air Station Beaufort in South Carolina. The pilot ejected safely. It’s the first time an F-35 has crashed — a remarkable achievement in historical terms — although previous accidents have resulted in F-35s being totaled. We’re still awaiting details on what happened, let alone the political fallout for the program. UPDATE ENDS

Military plane crash in Beaufort near Joe Allen Drive area. Appears to have crashed on a bluff/island owned by Clarendon Plantations. Not usually many people over there. Praying for the safety of all involved! pic.twitter.com/dM5a8v2lg1

The final agreement announced today was clearly hard-fought. Joint Program Office chief Vice Adm. Mat Winter put the heat on last February when he told reporters that Lockheed Martin “could be much more collaborative and cooperative but they aren’t… They could, but they choose not to.”

But these are genuine milestones, even if they don’t settle the debate. At least in terms of public perceptions, could this be the long-awaited turning point for the controversial stealth fighter after three decades of often-troubled development? 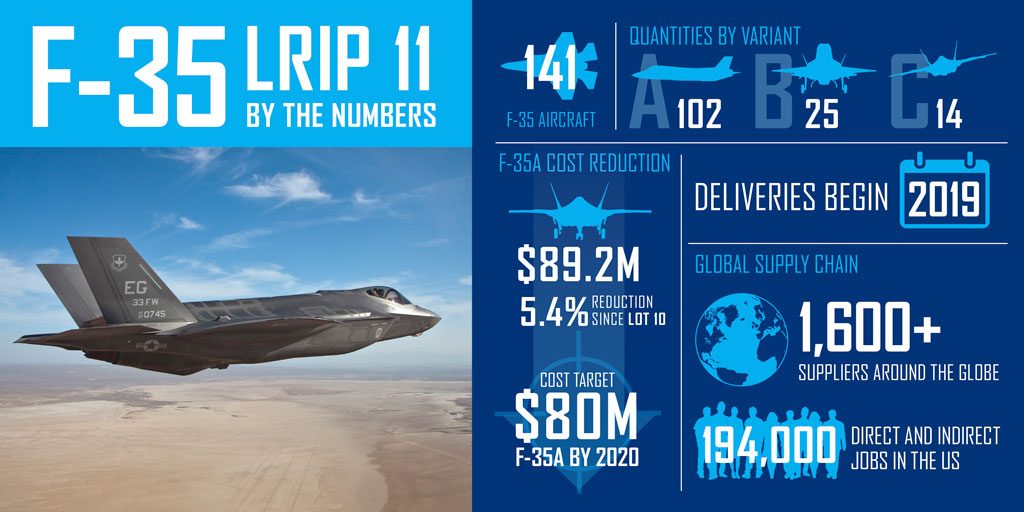 The cost per plane has been coming down, as contractors learn to build the airplane more efficiently, efficiencies of scale start kicking in, and both Winter and his predecessor as program manager have played hardball on price, publicly berating Lockheed Martin. But by how much?

Lockheed says it’s already brought the “fly away cost” — i.e. the marginal cost per plane, not counting R&D — by about 60 percent from Low Rate Initial Production (LRIP) lot 1, signed in 2007 for just two planes, to LRIP 10, signed in February 2017 for 90 planes. Today’s announcement was for LRIP 11, which covers a whopping 141 aircraft: 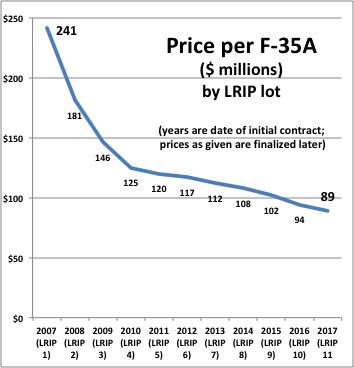 (See Sydney’s chart at right for a quick look at the pricing for the F-35A from the beginning, based on data provided by the JPO.)

Note that the figures released today include the engine, which some previous cost announcements omitted, as the engine is a separately managed program and a separate contract.

Despite these big numbers, moreover, remember this remains a Low Rate Initial Production (LRIP) contract. The Pentagon has not yet given Lockheed the go-ahead to enter full rate production. When it does, the program should achieve even greater efficiencies. It’s also important to point out that while  the total program cost will be staggering for the biggest conventional defense program in history, the F-35 is not a single plane and is not replacing a single program. It’s replacing