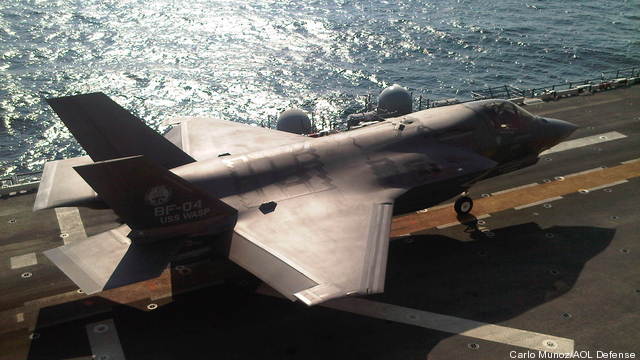 Aboard the USS Wasp: The sleek, angular plane pulls up to the flight line. The jet’s single engine rumbles slowly while waiting for the high-sign to takeoff.

Once the member of the deck crew threw his thumbs up, the jet’s center fan — which gives the F-35 the ability to take off from smaller carriers and land vertically on those same ships — whirred to life. The sound from the fan, once fully spooled up, combined with the roar from the F135 engine was deafening even from the upper decks where I stood.

Suddenly — with almost no warning — the jet jumps up from the flight line, hurtles down the short runway and roars hard toward the blue sky in a burst of heat, noise and smoke. In a few short minutes, it was gone.

After taking a lazy loop over the ocean after takeoff, the jet banked hard toward the ship and made what seemed to be an incredibly low pass over the control tower. After making that pass, the F-35B circled back again, but this time to begin the vertical landing maneuver.

As the fighter came back toward the ship, the center fan spun back to life again, bringing the jet to a virtual stop in mid-flight. The F-35B hovered over the landing zone, air bellowing from the engine and center fan and throwing up massive sea spray around the deck and surrounding area near the landing zone below.

The vertical landing evoked sense of controlled chaos. The fighter hovered and then seemed to just settle down on the deck, its landing gear making a dull thump sound once it touched down. The gentle motion didn’t seem to match the violent whine of the engine and the heat from the fan that you could feel in your chest.

Like the takeoff minutes before, the landing was over in minutes. The center fan shut down almost immediately, the engine throttled back down to a dull buzz and the deck crew scrambled all around the jet — getting it ready to do it all over again.

I watched the F-35B test jet do that twice today, and as we moved below decks to talk to program officials, I could hear the fighter making more passes over the ship.

These flight test were the culmination of an important few weeks for the F-35B, beginning with the first ever sea-based, vertical landing of the jet earlier this month.

Since that landing, program officials have addressed a handful of small issues with the two F-35B test jets, Col. Roger Cordell, director of the F-35 Integrated Test Facility, said.

Program engineers corrected a fuel leak in one of the jets, BF-2, early on during the flight trials, Cordell said, in addition to a few other minor anomalies. They were quickly corrected and did not affect the testing schedule set by the program office, he added.

When asked for his assessment of the fighter’s progress during the sea trials, Cordell was clear: “We are running where we intended to crawl.”

Using the AV-8B Harrier as an example, Cordell said that Marine pilots had to “fight” the Harrier’s control systems to fly it safely and correctly. The intuitive controls of the F-35B, he said, eliminates that problem and lets pilots concentrate “on fighting the enemy.”

Program officials here added the fighter’s progress during the trials came as no surprise, claiming the jet’s overall performance was never in doubt.

Less than a year ago, then Defense Secretary Robert Gates put the F-35B under a two-year probation, pointing to cost growth and schedule delays. The fighter’s performance during these sea tests may pacify some of the program’s critics. But doubt over the F-35B persist at some of the highest levels inside the Pentagon.

New Chairman of the Joint Chiefs of Staff Gen. Martin Dempsey gave a less-than-ringing endorsement of the program during his testimony before the House Armed Services Committee last week.

Given the tremendous budget pressures the department was now under, Depmsey questioned whether DoD could afford to buy all three versions of the F-35. Along with the Marine Corps’ F-35B, other versions for the Air Force and the Navy are also being built.

But one strike group commander told me that no matter how much money the Pentagon can save by killing the F-35B, the Marine Corps cannot afford to lose the fighter from the arsenal.

By getting the JSF on the decks of the Marines fleet of amphibious ships, those forces can take “the next step to respond” to any kind of combat scenario “across the full spectrum of operations,” Rear Adm. Kevin Scott, commander of Expeditionary Strike Group Two, said.

With the jet, Scott said he could push his forces farther and respond faster than he could with the current fleet of attack jets and helicopters at his disposal.

Scott wouldn’t speculate on what would happen if the F-35B did not make it into the arsenal. The one-star simply said he and his troops would do the job they were assigned with whatever assets they’ve got. But he said the F-35B would make his job, and that of his fellow combat commanders, a lot easier.