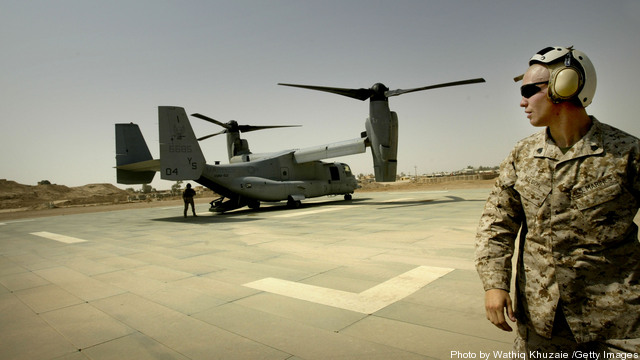 Washington: The Marine Corps is done paying for the past sins of the V-22 Osprey, commandant Gen. James Amos said today.

The Osprey is now one of the most dependable weapons systems in the Marine Corps arsenal, Amos told attendees during his speech at the Center for Foreign Relations this morning. It has been battle tested during combat missions in Afghanistan and Libya and come through with flying colors, said the first Marine commandant to be a pilot.

In Libya the Osprey was critical in the rescue of an downed Air Force pilot, who was shot down deep behind enemy lines during the U.N.-mandated peacekeeping mission in the country. If the Osprey had not been used, Amos claims that pilot would have ended up a prisoner of government forces loyal to now dead Libyan dictator Muammar Gaddafi.

Despite those performances, the Osprey continues — unfairly according to Amos — to get a “bad rap” from critics who are unwilling to forget the extreme difficulties the aircraft went through during the program’s early years. Between the late 1990’s into 2000, the V-22 program was marred by steep cost growth, schedule delays and a checkered development program that resulted in 30 deaths.

Amos readily admitted the program underwent tough times early on, but the four-star general laid the blame squarely on the shoulders of the Pentagon and Capitol Hill. The cause for all the death and destruction was lack of funding, the four-star general said. During those early years, the Pentagon — and more importantly the Hill — simply did not give the Marines what they needed, Amos said.

Because of that, the service was forced to take risks in the aircraft’s development. They proved costly — at times, deadly. But that was then, and this is now, and right now the Osprey is performing well and is safe, Amos said.

The Naval Safety Center rated the Osprey as the safest aircraft in the Marine Corps’ fleet, based on Class A mishaps per 100,000 flight hours, Breaking Defense reported in August.

Despite that recent track record, it is still unclear whether the second planned multiyear for the V-22 will make it through Congress. But as far as Amos and the Marines are concerned, the dark days of the Osprey program “are well behind us.”

Eds. note: The Osprey video was produced by Boeing.