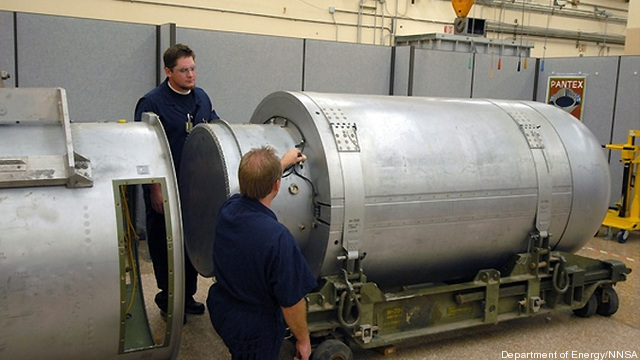 Washington: They are big. They were bad. But their time is past so the U.S. government has very carefully pulled to pieces the biggest nuclear weapons we ever built.

Taking apart the B-53 “is a major accomplishment that has made the world safer and for which everyone involved should be proud,” said Deputy Secretary of Energy Daniel Poneman in a NNSA statement released today.
The move is a “significant milestone” in the White House’s strategy to drawdown America’s nuclear arsenal over the next few years, National Nuclear Security Administration Administrator Thomas D’Agostino said in the statement. “Today, we’re moving beyond the Cold War nuclear weapons complex that built it and toward a 21st century Nuclear Security Enterprise.”

One nuclear analyst was skeptical of the reasons behind the announcement, ascribing them to administration attempts to curry favor with its base, many of whom support goal of no nuclear weapons.

“Wow, do you think it’s election season? Finally disposing of a weapon that was retired a quarter century ago, that was built without modern safety elements, that had to be dropped from an airplane over the target, and that would have rendered large areas utterly unsuitable for continued military operations — that’s just taking out the last bag of trash, but to a hard-pressed team of politicos it’s major progress toward a world free of nuclear weapons,” Bob Butterworth, former senior advisor to the head of Space Command and staffer on the Senate Intelligence Committee said in an email. “I’m happy to applaud the guys at Pantex who figured out how to do the dismantling (no small feat). We’re doing this because we’ve got other things we’d rather use if deterrence fails, not because the president made a speech in Prague.”
Butterworth was referring to an August 2009 speech in which President Obama committed the United States “to seek the peace and security of a world without nuclear weapons.” He questioned the rationale for pursuing such a goal. “And about the larger point–do we want to get rid of nuclear weapons? The reason the U.S. built built them to begin with, as General L. Welch (USAF-ret.) puts it, is because we didn’t want Hitler to be the only one who had them. So we probably don’t want to get rid of nuclear weapons until we’re sure there is no Hitler around with one hidden in a cave. You might also note that there was no war between/among the major powers for the past 60 years, and wonder whether nuclear weapons played any role in that record,” Butterworth said.

Another highly experienced nuclear expert, Janne Nolan director of nuclear security programs at the American Security Project, expressed similar skepticism of the announcement. “This is perhaps a milestone the way it would have been to conduct a burial ceremony for dinosaur remains — marking the end of a historical moment from when the earth was still cooling,” she wrote in an email.

The B-53 was introduced into the nuclear arsenal in 1962. It was the highest-yield nuclear bomb the United States ever produced. Weighing about 10,000-pounds and roughly the size of a small truck, the B53 bomb remained the highest-yield U.S. nuke until its retirement in 1997. A team of experts dismantled the bombs near Amarillo, Texas at the Pantex Plant.