Gen. James Jones: Arm Syrian Rebels — Some Of Them 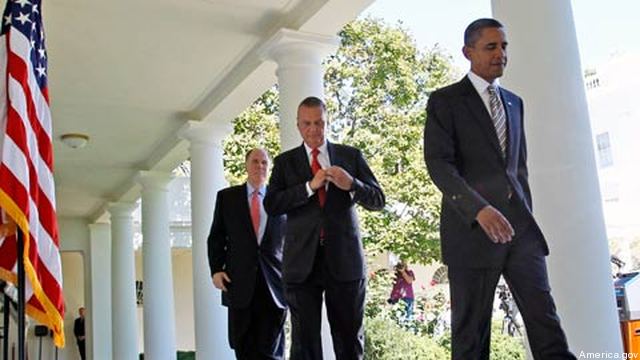 WASHINGTON: President Barack Obama’s former National Security Adviser, retired Marine Gen. James Jones, said the administration should go ahead and arm rebels in Syria — albeit carefully selected ones. “Hope is not a strategy,” Jones declared at the small, student-run Georgetown Diplomacy and International Security Conference at Georgetown University, where Jones is an alumnus. “If you’re a nation of consequence, you cannot sit back and hope things are going to work out.”

[Click here for Gen. James “Hoss” Cartwright’s remarks on cybersecurity and China at the Georgetown conference]

The former four-star, who served as both the Marine Corps Commandant and NATO’s Supreme Allied Commander in Europe, spoke about a wide range of subjects, from secretive drone strikes — “more transparency is necessary” — to his deep disappointments with America’s sometime allies, Iraqi prime minister Nouri Maliki and Afghan president Hamid Karzai — “they failed.” As always, he put in a plug for the “success story” of semi-independent Kurdistan: Jones has been a fan of Kurdistan since he served there in 1991’s Operation Provide Comfort and now heads the US-Kurdistan Business Council. But Jones reserved his strongest language for Syria.

“The clock is running and it’s only a matter of time before Assad joins the roll call of fallen dictators, the Ben Alis, the Qaddafis, the Husseins,” he told the small group of a few dozen Georgetown students, faculty, and guests. “It’s quite a bad time to be a dictator these days.”

Jones was guarded in his public remarks as to the exact conditions for arming rebel groups, so I cornered him afterwards to extract more detail. Is Jones really advocating the US provide, to use the term of art, “lethal aid” to the Syrian opposition?

“Yeah, if you can identify where they’re going and you know who the people are,” Jones told Breaking Defense. “I’ve been out of government long enough that I’m not involved in the details.”

“To the extent that you can identify that those people that are in the lead position to take over the government, and they’re people that you feel comfortable with, in order to reduce the killing and hasten the end of the regime, you should do that” [i.e. provide weapons], he said. “I think you would want to arm the right group. The question is, what’s the right group?”

“The Arab Spring is in my opinion the most consequential period in global affairs since the end of the Cold War,” he had told the Georgetown audience earlier, “[but] in far to many cases the radical forces are the most organized and the best poised to fill the vacuum of leadership.”

On Friday, these caveats may have sounded like equivocation. After Sunday, with the resignation of Syrian National Council president Ahmed Moaz al-Khatib — the second opposition leader to resign in two weeks — it increasingly sounds like wisdom.