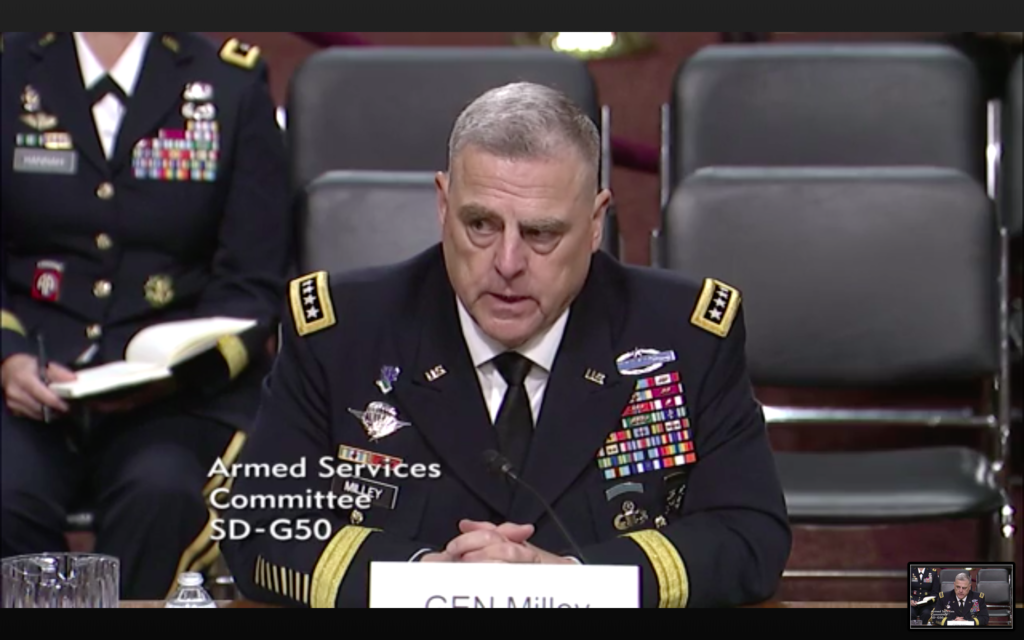 Gen. Mark Milley at his Senate confirmation hearing for Chairman of the Joint Chiefs of Staff, promising to give the President his honest military advice and “not … be intimidated into making stupid decisions.”

CAPITOL HILL: President Trump’s pick for Joint Chiefs chairman emphasized today he would not be “intimidated” by the president or anyone else “into making stupid decisions,” and he pledged to resign rather than follow any order that was “illegal, unethical, or immoral.”

The always outspoken Army Gen. Mark Milley made these comments under questioning from the Democratic caucus, during his generally genial confirmation hearing before the Senate Armed Services Committee. A Republican on the committee, Sen. Tom Cotton, quickly got the general to clarify that he would follow lawful orders, even if he thought they were “ill-advised.” But Milley didn’t require much prompting to declare his independence of mind.

“Your position as principal advisor to president in time of heightened international tension and risk is incredibly significant,” said Sen. Angus King, a Maine independent who caucuses with the Democrats. “You know what my question’s going to be?”

“Probably the same one you asked me when I was nominated to be the Chief [of Staff of the Army]: Are you going to be intimidated?” Milley replied. “Absolutely not, by no one, ever. I’ll give my best military advice, it’ll be candid, it’ll be honest, it’ll be rigorous and it’ll be thorough, and that’s what I’ll do every single time.”

Even standing in the Oval Office, King prodded, face to face with the most powerful man in the free world? “Being willing to say, ‘Mr. President, you’re wrong’,” the senator mused, “there’s no more important responsibility.”

Milley’s reply? “I would say it applies to Gen. Dunford” — the outgoing Chairman of the Joint Chiefs — “and most of us: We’ve seen a lot of combat. We’ve buried these soldiers. Arlington is full of our comrades, and we understand absolutely full well the hazards of our chosen profession.”

“We know what this is about, and we are not going to be intimidated into making stupid decisions,” Milley went on. “We will give our best military advice, regardless of the consequences to ourselves.” 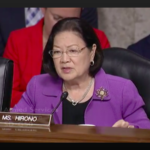 Earlier, Hawaii Democrat Mazie Hirono had asked Milley an even blunter question: Once serving as chairman, under what circumstances would you resign?

If he were being asked to do “something that was illegal unethical or immoral,” Milley replied. “That’s what I’ve been brought up with as a second lieutenant” when he first swore the oath of a commissioned officer.

Next up was Sen. Tom Cotton, a Republican and longtime ally of President Donald Trump, who urged Milley to clarify what his officer’s oath required.

“Frankly,” Milley said, “I’d expect any soldier, sailor, airman, marine, regardless of rank, not to obey an illegal, immoral, or unethical order, even at the risk of their own life.”

“Very much different than ‘ill-advised,’ absolutely,” Milley agreed. “It’s the Nuremberg standard: You can’t hide behind ‘I was ordered to do it.'” 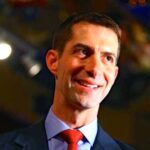 “So what the President should expect from you,” Cotton said, “is you always give your best professional military judgment,” and, Cotton continued, “you will then implement lawful orders even if you disagreed with them personally or think they might be ill-advised.”

“Absolutely,” Milley replied. It is critical for military personnel to “execute orders, if they’re legal, moral, and ethical,” he said. “The American people elected civilian control of the military. We’ll provide our advice…[but] when the decision maker makes a decision, it’s our job to execute.”

Why is it such a sensitive question where Milley draws the line between independence and obedience? Because many Democrats — and even some Republicans — saw the ousted Defense Secretary, Jim Mattis, and outgoing Chairman of the Joint Chiefs, Gen. Joseph Dunford, as restraining influences on a mercurial president who has little patience for traditional allies or military commitments.

Milley himself, just weeks after Trump announced his nomination (in a Tweet), publicly affirmed his commitment to “Secretary Mattis’s National Defense Strategy, which we will not walk away from.” At that same event, Milley also praised the Syrian Defense Force allies Trump had proposed to stop supporting — the issue that prompted Mattis to offer his resignation and then be effectively fired — and emphasized the importance of allies in general.

Today, Milley took pains to emphasize his admiration for Dunford, “a longtime friend of mine,” and how he would maintain continuity in the chairman’s seat. “If confirmed, I intend to use Gen. Dunford’s example and steadfast approach as a personal example for me to follow,” he said in his opening statement. 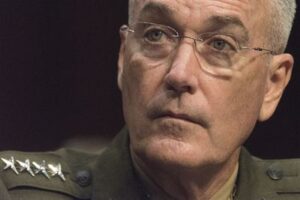 A few minutes later, Milley — known for his blunt and outspoken manner — took pains to associate himself with one of the soft-spoken Dunford’s most-admired virtues: “I have a deep sense of personal humility,” Milley said. “I know that I do not know all the answers. Therefore, I will be open to a wide variety of expert opinions.”

But the most crucial continuity between Milley, Dunford, and Mattis is a shared commitment to the post-1945 world order — an order that Trump had chafed against as unfairly restricting the United States. For Milley in particular, this is deeply personal commitment, tied to his parents’ service in World War II as a Marine and a nurse.

“My parents’ greatest generation, they fought to establish an international order that has prevented great power war for over seven decades, and it’s currently under the most stress since the end of the Cold War,” Milley said today. “Alliances and partnerships are critical to advancing our national security interests and I will work tirelessly with my counterparts from like-minded nations to ensure our collective security responsibilities are met.”