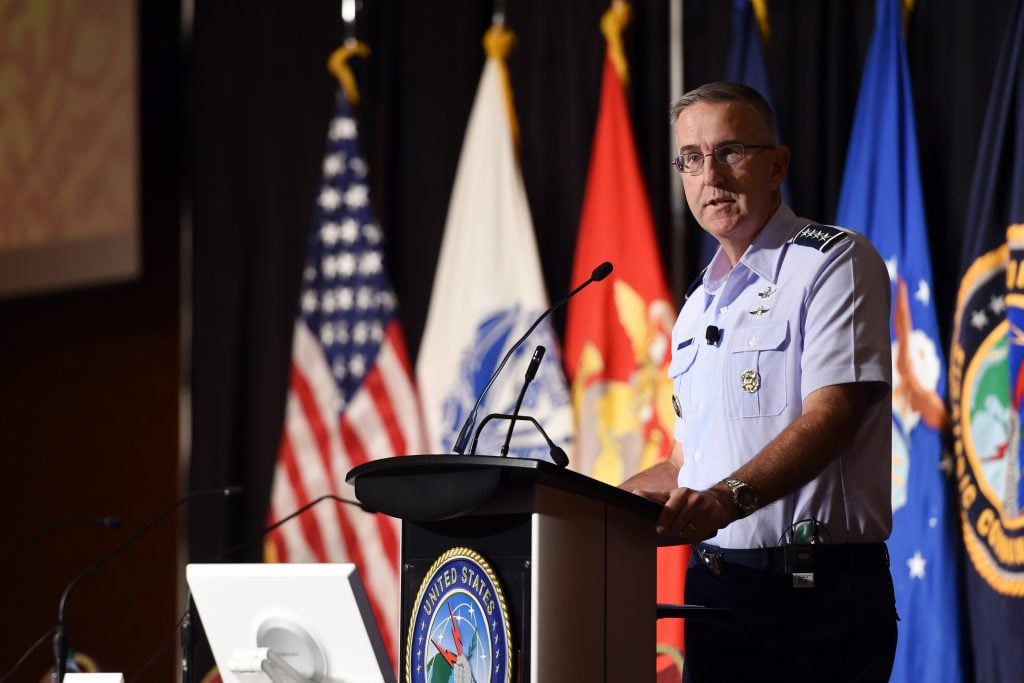 WASHINGTON: Despite having been fully exonerated of alleged sexual assault in an intensive Air Force investigation, Gen. John Hyten’s confirmation as vice chairman of the Joint Chiefs of Staff is in political peril. While the nomination now appears to have the support of Senate Armed Services Committee (SASC) Chairman James Inhofe, at least three senators — one Republican and two Democrats — have publicly expressed doubts due to concerns about the accusations.

Hyten, long one of America’s most respected leaders, was appointed as the head of Strategic Command (STRATCOM) in November 2016, after serving for two years as head of Air Force Space Command and a long career in Air Force space operations.

One day after Air Force officials briefed senators about the investigation in closed session, Inhofe told reporters he wanted to “keep things moving” on Hyten’s nomination, according to Politico.

However, Army veteran Tammy Duckworth said she wants the accuser, an Army colonel, to testify before the full SASC.  “We have been in contact with her and she has contacted several other offices as well,” she told reporters. “I am taking her allegations very seriously. They are deeply concerning to me. I would like the rest of the committee members to hear from her.”

Democratic presidential candidate Kirsten Gillibrand said on MSNBC that there’s no need for a hearing after the accusations, and that she does not “support his candidacy.” She said she thought Hyten’s record “is deeply troubling.”

Duckworth and another Democratic presidential candidate, Elizabeth Warren, had already asked Acting Defense Secretary Mark Esper in a letter “why Hyten was not removed from his post amid the investigation,” according to the Associated Press (AP), which obtained the letter.

Hyten was investigated by the Air Force Office of Special Investigations, over a number of weeks. Indeed, his Senate hearing was postponed at least twice to accommodate the inquiry. The convening authority was the head of Air Combat Command, Gen. Mike Holmes, who is not from the space community, as Hyten is, and is independent of STRATCOM.

“After a comprehensive investigation by the Air Force Office of Special Investigations, there was insufficient evidence to support any finding of misconduct on the part of Gen. Hyten,” Pentagon spokeswoman Col. DeDe Halfhill said yesterday. “Gen. Hyten cooperated with the investigation. With more than 38 years of service to our nation, Gen. Hyten has proven himself to be a principled and dedicated patriot.”

The fact that an official spokeswoman issued such a strong statement would seem to indicate Hyten has support from the top leadership in the Pentagon. Of course, that was yesterday. And the Trump Administration does not have a record known for loyalty.

The Air Force likewise issued a statement about Hyten’s investigation to Air Force Magazine: “’After a thorough review of the evidence collected by OSI, which included numerous witness interviews and relevant documents, and after meeting with the alleged victim, the designated General Court-Martial Convening Authority determined there was insufficient evidence to support any finding of misconduct,’ Air Force spokeswoman Ann Stefanek told Air Force Magazine.

The Army colonel, who served with Hyten at STRATCOM between 2016 and 2017, told AP  “that Gen. John Hyten subjected her to a series of unwanted sexual advances by kissing, hugging and rubbing up against her in 2017 while she was one of his aides. She said that he tried to derail her military career after she rebuffed him.” According to Defense One, who broke the story, Hyten’s accuser “contacted (SASC) committee members directly, according to defense officials and lawmakers.” AP also reported that, when asked, the colonel said she had been among several accusers in another incident while servicing with the Army in Iraq.

Gen Paul Selva, the current vice chairman, is due to retire at the end of July — which makes resolving the issue somewhat urgent. Further, the Pentagon is suffering from a dearth of confirmed officials after a raft of resignations over recent months.