Gen. Milley To SASC: World Getting Worse, Army Getting Smaller 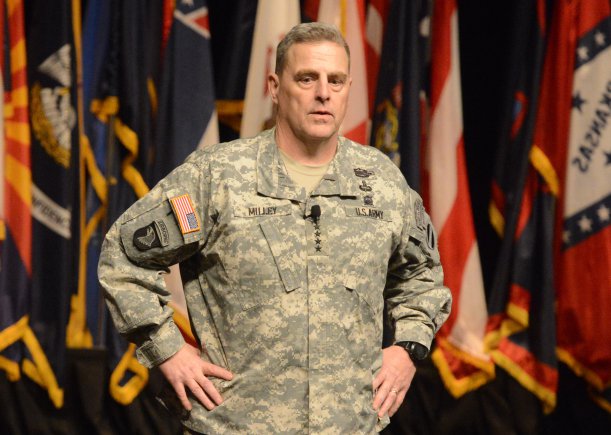 UPDATED: Russia is No. 1 threat, Milley tells Senate; give “defensive” arms to Ukraine
CAPITOL HILL: The world has changed, and not for the better. That’s the message Gen. Mark Milley brings to the Senate this morning.

The current Army Chief of Staff, Gen. Raymond Odierno, has often said the Army cannot execute the national strategy if the Budget Control Act caps (aka sequester) go into full effect. Gen. Milley, his designated successor, goes further: He says the current strategy may be too optimistic.

In 63 pages of questions and answers provided to the Senate Armed Services Committee (and Breaking Defense) in advance of the hearing, the prospective Army Chief of Staff warns that the foundational 2012 and 2014 documents defining the current strategy may have been overtaken by events — events like the rise of the Islamic State, Chinese brinksmanship in the Pacific, and the Russian invasion of Ukraine. 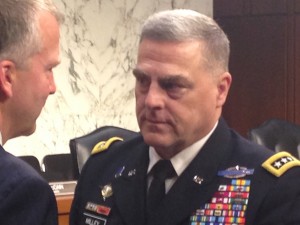 Gen. Mark Milley talks to a senator after this morning’s hearing.

“The 2012 Defense Strategic Guidance was based upon a number of assumptions, such as the duration of conflicts, the contributions of our allies, and the nature and location of future threats. Some of these assumptions now appear optimistic,” Milley writes. “The 2014 QDR [Quadrennial Defense Review] was based on a set of facts and assumptions that did not include the current situation in Eastern Europe and Russia, the rise and spread of ISIS along with the disintegration of the nation-state in the Middle East, and the increasing military capability and foreign policy assertiveness of China. In short, the world has become more uncertain and unstable since the 2014 QDR was written.”

What does that mean for the US Army, currently cutting 40,000 troops and expected to lose another 30,000 under sequester? “The U.S. Army will continue to shrink,” Milley writes bluntly. “However…the demand for ground forces will continue to increase.”

“Right now the level of uncertainty, the velocity of instability, and potential for significant inter-state conflict is higher than it is has been since the end of the Cold War in 1989-91,” Milley writes. The italics are ours, but the emphasis is the Pentagon’s: The outgoing chairman of the joint chiefs, Army Gen. Martin Dempsey, also argued in his recently released National Military Strategy that the risk of war between nation-states, while still mercifully low, is growing.

Milley assesses risk across three crucial missions for the Army. The first and most critical is homeland defense, which he’s confident the service can handle. The second priority is global engagement and partnership-building, which the service has enough forces for, albeit with worrying “strain” and “stress.” The third, Milley says, is “to project power and win decisively” — as in a major war: “Here, the risk is significant and trending higher.”

UPDATE: What’s more, Milley made clear this morning, such a war would be “a different fight than what we’ve been dealing with for the last decade and a half. We’ve got ways to go with improving our readiness with respect to higher-end type of combat operations.” UPDATE ENDS

That’s a critical problem. The service has many missions, from disaster relief to logistics support, Milley told the senators in his opening statement this morning, but “our reason for being,” he said, “the core of what it means to have an Amy, is to win and win decisively in ground combat against enemies of our country.”

UPDATE: So what’s the No. 1 threat to the United States? “I’d have to say it is Russia,” Milley said in response to Sen. Joe Manchin this morning. “Russia is the only country on earth that retains a nuclear capability to destroy the United States, so it’s an existential threat.”

Milley doesn’t ignore the kind of counterinsurgency and counterterrorism operations that have consumed the Army (and Marines) for most of the last 15 years. Nor does he slight the global partnership-building that was a major emphasis of Odierno’s. (Milley himself has worked in Colombia, Somalia, Haiti, and Korea, as well as Afghanistan and Iraq). Nor does Milley overlook the rise of so-called “hybrid” warfare, in which states act like guerrillas and non-state groups act like states. (Russia’s “Little Green Men” and the Islamic State are the two main examples). But like Dempsey, Deputy Defense Secretary Bob Work, and Undersecretary Frank Kendall, Milley emphasizes the threat from sophisticated adversaries who can catch up with our technology.

“Both state and non-state adversaries have employed novel capabilities, created by combining increasingly available military and commercial technologies,” Milley writes. “The Army currently benefits from an overmatch that enables a historically small number of Soldiers to accomplish significant operations while minimizing casualties. This advantage has a shelf life; the technologies that gave us the advantage today are increasingly available to state and non-state adversaries at dramatically lower cost than even a decade ago. As that overmatch degrades, the risk to Soldiers increases.”

So while Milley says “my #1 priority, if confirmed, will be readiness” — an Army obsession since the Korean War and currently at half the service’s goal — “our #2 priority is to invest in the technologies, organization, and doctrine that will allow us to maintain overmatch.”

Just don’t expect a revolution any time soon, Milley says, echoing comments by Army acquisition chief Heidi Shyu: “Given fiscal constraints, the Army will likely have to continue to delay our next generation of platforms” — that is, no new tanks, helicopters, or missiles any time soon.

UPDATE: It wasn’t all gloom at the Hart Senate Office Building this morning, though. Rhode Island senator Jack Reed, the top Democrat on the committee, caught himself pronouncing the general’s name with a long “i” — as if it were “Miley” — and triggered a mini-seminar on New England dialects.

“And you’re from Massachusetts, I know,” the senator said. “Forgive me if I mispronounce things.”

“As long as we both like the Red Socks,” said the general. UPDATE ENDS