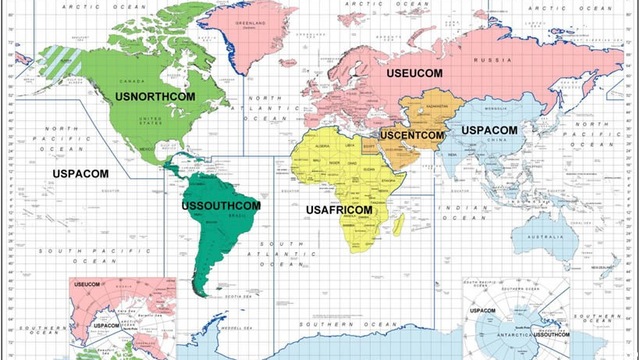 THE PENTAGON: Republicans came out swinging today as President Obama’s national security team unveiled its budget, accusing the administration of missing the connection between strategy and budgeting.

President Obama’s promise to shift the military’s focus to Asia and the Pacific while relying largely on special operations forces and drones against terrorism is, at best, hard to find in the new budget, GOP supporters said.

“The new defense strategy says one thing while the defense budget does another,” Mackenzie Eaglen, a defense expert at the conservative American Enterprise Institute, said in an email. “Both the Navy and the Air Force are shrinking.”

The Pentagon’s tilt toward the Asia-Pacific region, its very public embrace of AirSea Battle — thought by many to be a form of containment strategy aimed at a rising China — left many expecting that the Navy would be the big winner in the defense budget. After all, shaping the environment in the Pacific requires many ships, aircraft and people, given the vast distances involved.

“This budget reflects a true reduction, in real terms, of military spending while we have troops in combat,” Rep. Buck McKeon, Republican chairman of the House Armed Services Committee said in an email within minutes of the budget’s release. “It irresponsibly ignores the looming threat of sequestration, while failing to adequately address threats posed by our adversaries around the world.”

Under the Pentagon’s new spending plan, the Navy procurement budget is to decline by a total of $32 billion over the next five fiscal years, compared to what the service had previously expected to spend. The request for this year will shrink by $3.6 billion to $42.5 billion. The Air Force is to retire six fighter plane squadrons over the next five years.

“The Air Force will get smaller and older under the President’s defense plans. The Navy will build fewer ships and retire others in the fleet sooner than planned. The Navy’s overall fleet composition is shifting from one dominated by powerful surface combatants and submarines to a fleet made up of many small, lightly armed littoral craft and transport vessels,” Eaglen argued.

Documents released with the budget by the Pentagon, however, cited the Navy’s retention of 11 aircraft carriers, 10 air wings and 11 big-deck amphibious landing ships needed to keep Marines and their aircraft on station overseas as symbols of a “rebalance toward Asia-Pacific/Middle East.” The budget documents also cited $300 million in funding to develop a new strategic bomber for the Air Force, $100 million to increase cruise missile capability on submarines and $1.8 billion in planned spending on tactical sensors, electronic warfare and communications gear as items implementing the new strategy.

And senior administration and military officials have repeatedly stressed that they built their strategy first and allowed it to drive budget decisions, something the GOP has repeatedly accused them of failing to do.

The Pentagon plans to make its first installment toward cutting $489 billion in spending over the next decade largely by slowing – though not canceling – weapons purchases, relying on procurement reductions for roughly 40 percent of an initial $5.2 billion saved in fiscal 2013.

As the military draws down forces deployed in Afghanistan over the next two years, the Defense Department also wants to reduce the Army’s 569,400 end-strength by about 17,300 and the Marine Corps’s 202,100 by 4,800 troops. DOD also wants Congress to establish a new Base Realignment and Closure Commission to shut down military bases in 2013 and 2015, something last done in 2005.

The new budget contains $9.17 billion to buy 29 more Lockheed Martin Corp. F-35 Joint Strike Fighters, parts for future production and related expenses. That’s two fewer F-35s than the company expected DoD to buy a couple of months ago, but the cut was dictated more by issues with aspects of the JSF’s design and technologies than by the campaign for budget economy. Vice Adm. David Venlet, who runs the F-35 program for the government, said in an Breaking Defense interview last year that the F-35 production schedule was too ambitious and should be slowed, given the amount of testing and design changes still to be done.

While the Pentagon plans to buy 179 fewer F-35s than previously planned over the coming five years, it also plans to buy just as many as ever over the life of the program — 2,443 for the Air Force, Navy and Marine Corps. Lockheed, moreover, could end up building as many or more for 10 or more allied nations.

By the same token, the fiscal 2013 defense budget requests 21 V-22 Osprey tiltrotor troop transports for the Marine Corps and Air Force, six fewer of the helicopter-airplane hybrid aircraft that its makers, Bell Helicopter Textron Inc. and Boeing Co., had expected a few months ago under a five-year contract still being negotiated. But while the Pentagon has decided to buy only 98 rather than 122 Ospreys in that five-year deal, the total number to be bought – 360 for the Marines, 50 for the Air Force and 48 for the Navy – remains unchanged.

The new budget also slows purchases of armed drones, containing $885 million to buy 24 MQ-9 Reapers for the Air Force, a reduction from 48 in fiscal 2012, and $750 million to buy 19 MQ-1C Gray Eagles for the Army, down from 43 last year. Pentagon Comptroller Robert Hale said the Reaper program was being slowed to permit the Air Force time to train enough flight crews to meet a goal of being able to provide 65 round-the-clock MQ-9 combat air patrols (CAPs). Both the Reaper and Gray Eagle, an Army derivative of the MQ-1 Predator, are built by General Atomics Aeronautical Systems Inc. of Poway, Calif.