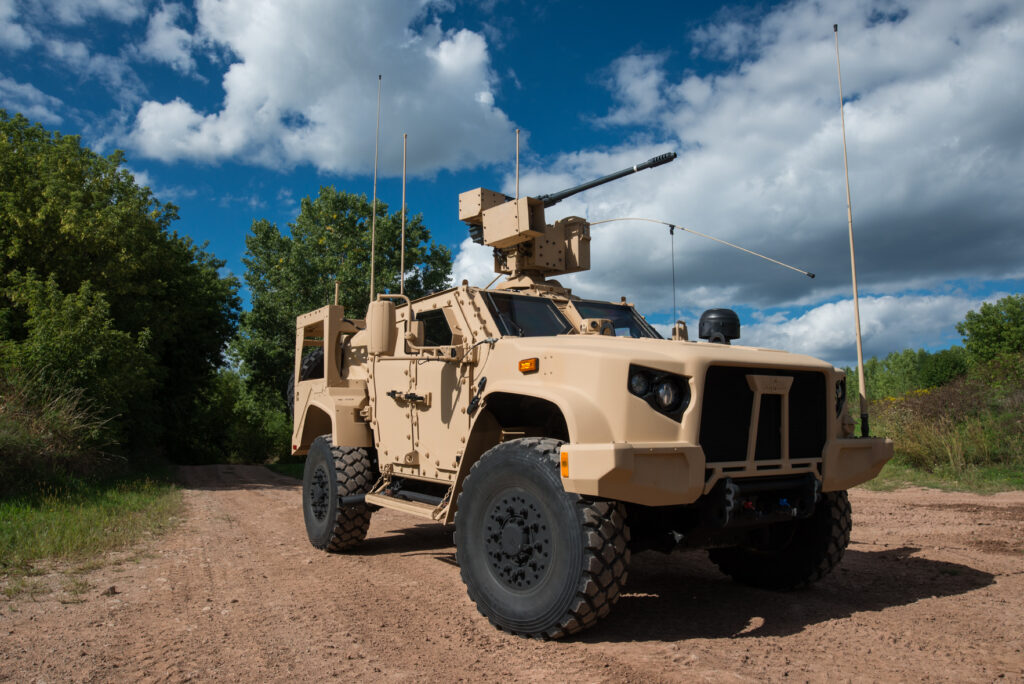 After a summer of speculation and anticipation, truck maker Oshkosh is rolling out the much-awaited upgunned variant of its Joint Light Tactical Vehicle, meant to scout ahead of Army infantry. While Oshkosh didn’t confirm or deny they were going for the Army’s Light Reconnaissance Vehicle requirement with this upgrade, it’s an extremely open secret. Adding a 30 mm chaingun to JLTV — much bigger than the normal 12.7 mm machinegun — fixes the biggest shortfall the vehicle had for the LRV mission.

The Army and Marines have long planned to purchase over 50,000 JLTVs to replace vulnerable Humvees and cumbersome and often road-bound MRAPs. Originally, though, they were just going to be armed with .50 caliber (12.7 mm) heavy machineguns, 7.62 mm light machineguns, grenade launchers, and maybe anti-tank missiles, basically the same mix as the Humvee. Fitting a 30mm chaingun — normally used on Apache attack helicopters — onto a relatively small truck is a big deal. The extra range and firepower allows commanders to employ the vehicle much more aggressively — for example, as a forward scout moving out fast and well ahead of the main force.

Originally, the Army planned to buy a new vehicle for the LRV requirement. The service looked at a range of lightweight, lightly armored trucks, including armed versions of its Ground Mobility Vehicle troop transport. (GMV was called the Ultra-Light Combat Vehicle until the Army renamed it — confusingly, because the term Ground Mobility Vehicle is also used for a different Special Operations truck). But budget considerations, as usual, cramped the Army’s style. So the service decided to use the already-in-production Joint Light Tactical Vehicle instead and just make JLTV meet the LRV specs as well as possible — most importantly, by adding the 30 mm gun.

There are still some tradeoffs. The JLTV is heavier than the purpose-built LRV would have been, so it can’t be air-dropped onto the battlefield. That’s a big deal for the 82nd Airborne Division, but not for the vast majority of the Army. On the upside, the heavier JLTV is better protected, particularly because it’s designed from the tires up to survive roadside bombs. The JLTV is also more cramped, with room for one less scout trooper than the original LRV requirement, but the Army has said it can work around that.

Oshkosh is releasing its first photos of a JLTV equipped with a 30 mm cannon today and will be showing off the vehicle at this weekend’s Baltimore convention of the powerful National Guard Association of the United States, where Army Chief of Staff Gen. Mark Milley and other defense leaders are scheduled to speak.