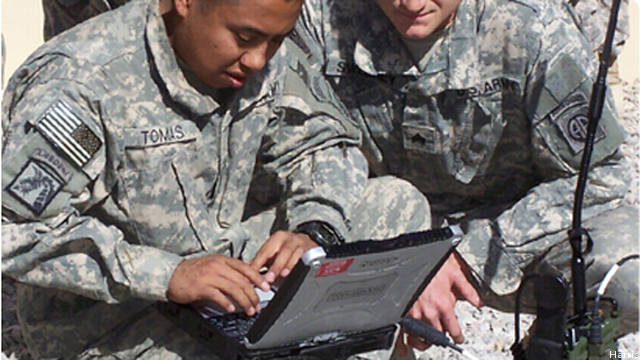 [corrected Dennis Moran’s title at 3:45 pm] AUSA: General Dynamics issued what the Army’s top tester called a “mea culpa” over its troubled Manpack radio, while archrival Harris sharpened its knives to compete with GD for both the backpack-sized Manpack and the smaller Rifleman Radio.

At a briefing for reporters at the Association of the US Army’s annual conference in Washington, DC, Army Test and Evaluation Command chief Maj. Gen. Genaro Dellarocco brandished a letter he and other officials had received from General Dynamics C4 Systems president Christopher Marzilli. Dellarocco said Marzilli had written “to apologize” for remarks the GDC4S executive had made that seemed to criticize how the Army had tested the company’s Manpack radio, remarks which Marzilli said were “taken out of context.” (For clarity’s sake, we should note we’re quoting Dellarocco’s description of Marzilli’s letter here, not directly from the letter itself). A General Dynamics spokesperson told Breaking Defense that our article on the subject quoted Marzilli accurately.

Asked by Breaking Defense after the briefing, Dellarocco said Marzilli acknowledged there had been real problems with Manpack radio and that the letter amounted to a “mea culpa,” something Dellarocco praised as taking some courage to write.

Dellarocco made clear the Army had full confidence in its Network Integration Evaluations at White Sands Missile Range in New Mexico. It was those tests that led the Pentagon’s independent Director of Test and Evaluation, Michael Gilmore, to declare the Manpack radio “unsuitable.”

Dellarocco dismissed the idea that there was “tension” over the testing between the Army and Gilmore, but he did say of Gilmore that “he is very passionate about what he does… He sees things in black and white, we see things in shades — I don’t want to go there,” Dellarocco said, cutting himself off mid-sentence.

“White Sands provides a good operational environment,” said Dellarocco. “We see integration problems that we hadn’t seen before, [and as a result] we’re shaking out the systems stateside, not on the battlefield, and that’s saving taxpayers a lot of money, [and] it’s going to save lives.”

With regard to General Dynamics’ Manpack radio specifically, Dellarocco went on, “it was a good test, it showed us what we needed to see, that there were challenges with Manpack.” But with the fixes General Dynamics is making, which were tested in a second look at the system in Fort Huachuca, Dellarocco said, “the doggone thing’s going to work.”

Nevertheless, the Army will still allow all comers to compete with General Dynamics for full-rate production of both the Manpack radio and the smaller Rifleman Radio. A formal Request For Information about the Rifleman competition went out yesterday. An RFI for Manpack will probably follow in “90 to 120 days,” guesstimated Dennis Moran, the retired Army Signal Corps general who is now VP for government business development for radio manufacturer Harris. Moran promised his company will compete vigorously for both.

“We’re still analyzing the RFI that came out yesterday, [and] the same people that need to analyze the RFI are standing in front of the booth here,” Moran told Breaking Defense at the company’s AUSA exhibit today, but so far it’s looking good. Instead of offering a single radio that meets the Army’s specifications in the RFI, such as their handheld PRC-152A, Moran said, “we’re going to have multiple products that are going to be able to compete.”

The Manpack is much more complex, and Moran acknowledged that Harris does not yet have a radio that meets all the Army’s requirements. That said, he hinted that Harris’s candidate was “well past prototype testing” and promised it would be ready for the competition in winter 2013.

In particular, what the Army requires, and what General Dynamics delivers, is a single radio able to operate on two different channels; Harris’s current PRC-117G radio has only a single channel. While the company offers a two-channel product that simply joins two of the single-channel radios together, it’s unpleasantly heavy for a soldier to carry in his backpack.

“If you’re concerned about weight it is a less than optimal solution,” Moran said, but that’s just an interim offering. When the formal competition starts, he said, “we will fully meet the Army’s requirements.”

So who will win these two big radio contracts — General Dynamics? Harris? A third competitor like BAE, Exelis, or Raytheon? The Army and Maj. Gen. Moran argue that in any event, having a real competition will benefit the taxpayer and the soldier. Said Moran, “they’re going to get innovative solutions at a very affordable price.”