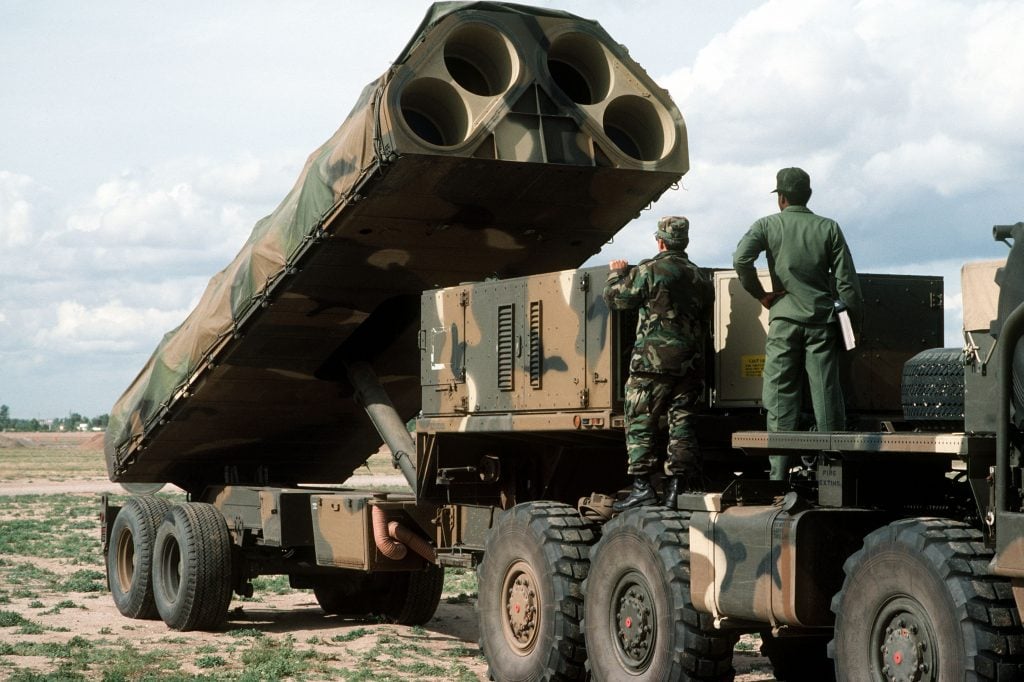 UPDATED WASHINGTON: This afternoon, a junior GOP congressman will challenge House leadership to restore $96 million in funding for intermediate-ranged conventional missiles, cut by the Democratic majority for fear the new weapons would reignite an arms race that ended in 1987. True, Rep. Mike Gallagher’s amendment to the mammoth defense appropriations bill is a long shot. But it’s also the GOP’s warning shot for a bigger battle likely to come in conference between House Democrats and Senate Republicans.

UPDATE: Gallagher’s amendment failed — narrowly — on a largely party-line vote: 225 nays, 203 yeas, with only 13 Democrats voting for the bill. “Conference would be the next line of defense,” Rep. Gallagher told me. “We have some allies on the Senate side.” UPDATE ENDS

At issue: three little-known weapons programs that together amount to a rounding error in the Pentagon but which have outsize strategic significance. Depending on who you talk to, they open the door either to new, relatively affordable options to deter aggression without resorting to nuclear threats, or to a new arms race that will inevitably undermine nuclear arms control.

Reagan and Gorbachev’s 1987 Intermediate Range Nuclear Forces treaty, despite its name, banned both nuclear and conventional missiles launched from land — but not from ships, submarines, or aircraft — with ranges between 500 and 5,500 kilometers (about 310 to 3,4100 miles). Seeking to counter both Russian violations of the landmark treaty and China’s growing arsenal of intermediate-range missiles — which INF never covered — the Trump Administration is withdrawing from the pact and wants to test two new weapons soon after it expires on August 2nd. First, in August, would be a land-based variant of the Navy’s Tomahawk cruise missile, with a range of over 600 miles. Second, in November, comes a new ballistic missile, with a range of over 1,800 miles.

The 2020 budget requested $107 million for the overarching Prompt Global Strike Capability initiative, which covers both these weapons. It also requested $20 million — a down payment on a five-year, billion-dollar program — for an Army program called Mobile Medium Range Missile, about which almost nothing is known: After weeks of harassing people in the Pentagon, the Hill, and watchdog groups, I still can’t tell if it’s a cruise missile, a ballistic missile, or the new hybrid technology referred to as hypersonics.

The Senate Armed Services Committee approved the funding; Senate appropriators are still in deliberations. But the House Appropriations Committee slashed funding by $96 million: $76 million from Prompt Global Strike, all $20 million from the Army missile. The House Armed Services Committee echoed the $76 million cut but left the Army program alone UPDATE in its initial draft, then cut that as well during markup. UPDATE ENDS (HASC also transferred $31 million from Prompt Global Strike to Army hypersonics).

35-year-old Rep. Gallagher — a Marine Corps veteran of Iraq and former Hill staffer only elected in 2016 — is a junior member of HASC. Having fought and lost in the that committee, he took a shot at amending the appropriators’ bill and was pleasantly surprised House leadership ruled the amendment germane.

Gallagher will formally make the case on the floor this afternoon and a vote is likely late tonight. The young congressman probably doesn’t have the votes in the Democrat-led House to amend the massive defense appropriations bill, and even if he did, he’d have to amend the HASC’s authorization bill as well. (Discretionary spending, like nuclear weapons, has a kind of dual-key system to launch). But for proponents of the weapons, this is just an initial skirmish: Their main line of defense is the Senate conference with the House.

“I lost in committee,” Rep. Gallagher told me bluntly this afternoon. “I was surprised, when I took the fight to appropriations, that they ruled it in order…. I’ll see how the vote shakes out.”

Do you really think, I asked, that you can muster the votes in a Democratic House? “The honest answer is I don’t know,” he said. “The opposition of HAC-D and HASC chairmen is certainly significant.”

“I think that conflation is a huge mistake,” he insisted. Since none of the three weapons in contention is nuclear-armed, they strengthen conventional deterrence and make resort to nuclear weapons less likely, he argued. And by showing the Russians that their violations of INF have a cost, namely that the US will now build non-INF-compliant weapons of its own, it makes them less likely to cheat on other accords, he said.

The real strategic issue, Gallagher said, is not the nuclear balance but conventional deterrence in the vast “Eurasian rimland.” (An international relations Ph.D. whose attempt at an academic career got derailed into politics, the young congressman cites theorists like MacKinder and Spykman in casual conversation).

“You look at the map, you quickly realize how limiting the INF is,” he said. If the US wants to contain China in particular, given the vast distances of the Pacific, missile bases on allied islands are a logical first line of defense — but the INF treaty bans every weapon with the requisite range, even as China builds up an arsenal of them.

The end of INF, “opens up a world of opportunities to get more defense at less cost,” Gallagher argued. “We can scatter small teams of marines and soldiers throughout the island chain chains, arm them with INF-noncompliant systems like LRASMs, and we can hold China’s exquisite assets at bay for relatively cheap amounts of money, in a way they’re doing with us with their rocket force [now], the largest in the world.”

Critics charge that no ally in Asia or Europe has said they’re willing to emplace such weapons on their soil — though Poland is a likely candidate — and the US has plenty of air- and sea-launched alternatives to INF-banned ground-based weapons, even if ground weapons are cheaper per shot. And they’re deeply disturbed by the lack of detail the Administration has shared on how the weapons will be work or how they’ll be used, let alone where they’ll be based.

Gallagher is hoping to get a public debate started. “Half the battle,” he said, “is getting people to take the time to pay attention to what’s going on.”