Hope, Innovation, Risk: How to Survive The Shrinking Army 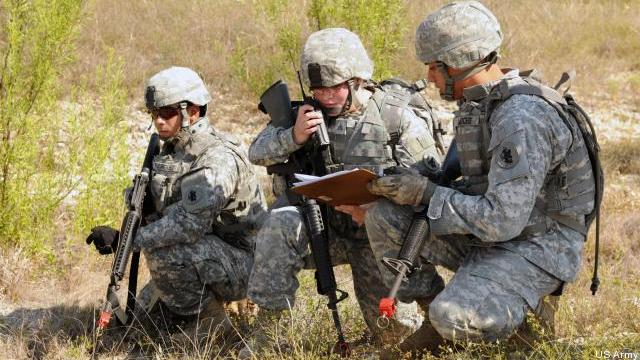 The Army faces one of the great post-war declines in budget and people, a time of great uncertainty. How should it cope? The Army can’t just go into a defensive crouch and try protecting what it has, argued a high-powered group of retired generals: The service’s top leaders must articulate a positive vision of how the Army needs to change and keep investing in innovation even in time budgetary times.

“Don’t sit around feeling sorry for yourself because we’re going through the perturbations of a downsizing: Have a vision,” summed up retired Brig. Gen. John Sloan Brown, the former chief of military history for the Army and author of a new book entitled Kevlar Legions: A History of Army Transformation, 1989-2005. Amidst the steep downsizing of the late 1980s and early ’90s, he said, “a relatively select group of folks envisioned a future that they could put into practice when funded.”

Brown spoke at a panel during the annual conference of the Association of the U.S. Army. In the front row sat the Associations’ president, retired General Gordon Sullivan. “The first role of a commander is to keep hope alive,” said Gen. Sullivan. “Keep hope alive with the troops who were being ripped apart by this budget stuff… Don’t talk about that, keep talking about the bright future.” But talk is just talk, and, to quote the title of Gen. Sullivan’s own book, “Hope is not a method.” So to realize his vision, as Army Chief of Staff from 1991 to 1995, Sullivan launched experiments in “digitization” that led to the modern Army’s extensive use of computer networks to coordinate operations.

Getting there took persistence. “Experimentation is difficult, and failure is often as important as or more important than success,” cautioned another panel member, retired Gen. William Hartzog, who as commander of the Training and Doctrine Command (TRADOC) led much of the innovation effort for both Sullivan and his successor as Chief of Staff, Dennis Reimer. While soldiers are trained to salute and make things work, and both the media and Congress jump on failures in field tests as reasons to cancel a program, Hartzog argued that often the failures teach us far more about the new concept than do the successes.

In fact, Hartzog said his chief regret was not taking more risks. “I think we undershot on the doctrinal thing,” he said, referring to the manuals laying out the new concepts. “We were not nearly as inventive, creative, or ambitious with what we wrote, [but] we didn’t know we undershot it until we went out and tried it – so that’s an important lesson learned about live experimentation.”

Trying out new ideas in the field is critical, Brown agreed, pointing to other periods when the military has managed to innovate despite tight budgets. Most notable is the time between the two World Wars, when the services not only built prototypes of new technologies like tanks, bombers, and aircraft carriers but also organized prototype units to test new tactics – experimentation that provided the intellectual blueprints for the massive buildup for World War II. “Out of hide, you get the experimental unit,” Brown said, “and make it work on very slender resources until all of a sudden this unanticipated future comes and you have the money.”