WASHINGTON: House Democrats moved today to strip the Pentagon of the authority to shift money between accounts in a new 2020 defense spending bill, a long-expected response to the White House taking defense dollars for the president’s border wall.

The House Appropriations Committee’s version of the 2020 Pentagon funding bill, which a top Democrat said “rejects the Trump administration’s budgetary gimmicks,” calls for $622 billion in base funding and $68 billion in Overseas Contingency Operations funds, while buying more F-35s and F-15Xs than requested while slashing advance procurement money for a third Virginia-class attack submarine.

The document provides a preview of coming battles between House Democrats and Senate Republicans, as it slashes the amount of money the military can shift between accounts from $9.5 billion to $1.5 billion, while prohibiting the use of defense funds for the border wall.

The Pentagon has already reprogrammed $1.5 billion in fiscal 2019 funds to support wall construction along the border with Mexico, with the Air Force taking by far the biggest hit by being stripped of money previously aimed at modernization programs.

The Air Force is responsible for coughing up $402 million out of the $818 million in equipment programs the Pentagon plans to spend on the wall. The programs losing out include roughly $210 million from Air Force space programs, and $24.3 million from the Minuteman III Launch Control Block Upgrade program, which is available due to what the document claims is a “slip in the production schedule for FY 2020.” 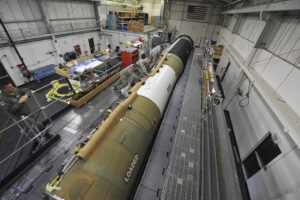 In a shot at the administration’s plans to move billions from defense accounts to construction of the border wall, House Appropriations Subcommittee on Defense chairman Pete Visclosky said in a statement the legislation “protects and asserts the constitutional prerogatives of Congress so that funds appropriated are only to be spent on designated and authorized purposes.”

In perhaps the most significant break with the White House, the committee rejected the Trump administration’s plan to move $164 billion from the base budget into the OCO account to skirt budget caps. The bill provides $68 billion for the OCO fund, and shifts the rest back into the base account.

“This bill rejects the Trump administration’s budgetary gimmicks and sleights of hand and instead provides the Defense Department with appropriate resources to address an evolving threat landscape,” House Appropriations Committee Chairwoman Nita Lowey said in a statement, adding the bill would protect defense funding “from being stolen for the President’s wasteful wall.”

Those proposed restrictions aside, Democrats penciled in an extra $11.4 billion above the base request for increased investments in ground vehicles, aircraft, ships, munitions, and other equipment. 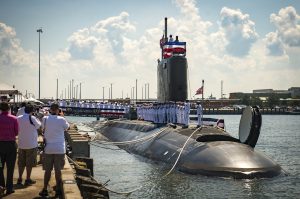 The Navy had already cut two LPD amphibious ships from its long-term plan in 2020, which the House Democrats have yet to put back in, despite lobbying from ship builders.

It bill would block transfer of F-35s to Turkey if it goes through with its planned purchase of a Russian S-400 air defense system.