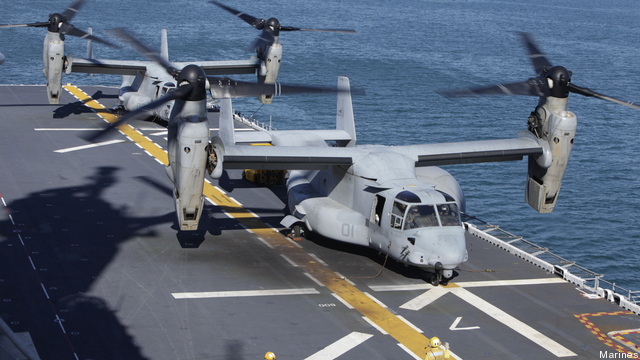 ARLINGTON, Va: Col. Frank Donovan, commander of the 24th Marine Expeditionary Unit, was standing on the flight deck of the USS Iwo Jima as the amphibious assault ship sailed near the Horn of Africa one day last October, seven months into a nine-month deployment, when a young lance corporal asked to speak to him.

“I said, ‘Yeah, what’s up?'” Donovan recalls. “And she says, ‘Everyone says we’re America’s nine one one force.’ I said, ‘Yeah, we are.’ She goes, ‘How come no one’s calling?'” This was asked, remember, when the Middle East and Maghreb were boiling over after the Arab Spring ripened.)

The corporal asked a penetrating question, one that highlights a problem the Marine Corps needs to address, Donovan told the Marine-friendly Potomac Institute in a Jan. 16 briefing on the trip his MEU (pronounced “mew”) made aboard the three vessels of the USS Iwo Jima Amphibious Ready Group, or ARG, (pronounced the way it looks).

“After 10 years in Iraq and Afghanistan, we have whole staffs that don’t know how to employ the ARG/MEU team,” Donovan said.

The Iwo Jima (LHD-7), USS New York (LPD-21) and USS Gunston Hall (LSD-44), all three ships under the command of Navy Capt. Art Garcia, who conducted the brief with Donovan, carried the 24th MEU near hot spots from North Africa to the Horn to the Indian Ocean and Persian Gulf last year as Muslims from Morocco to Malaysia rioted over an amateur anti-Islamic video. During the deployment, Islamist militants killed the U.S. ambassador to Libya in Benghazi and rioters attacked or threatened U.S. embassies in Cairo, Egypt, Khartoum, Sudan, and elsewhere.

Equipped with small boats, landing craft, six AV-8B Harrier jump jet fighter-bombers, a dozen MV-22B Osprey tiltrotor troop transports, a baker’s dozen helicopters, 109 Humvees, four M1A1 tanks and more than 2,000 marines, the Iwo Jima ARG/24th MEU was ready to respond in a wide range of ways. An ARG/MEU is a formidable and flexible force, after all, that can do everything from fight its way ashore to evacuate embassies in hostile circumstances, to deliver food, water and medical care to refugees of war and victims of natural disasters. While the Iwo Jima ARG/24th MEU conducted major exercises with the armed forces of Morocco and Jordan, taught Ugandan troops on their way to Somalia how to use RQ-11B Raven hand-launched drones, ferried two MV-22Bs out of Afghanistan and had their flight decks used for special operations, the unit apparently wasn’t on the phone tree when higher-ups were planning real world missions.

“We’ve been out there responding, getting ready to go,” Donovan said. “We want to launch. I mean, marines are just salivating to get to go knock one of these missions out. And the call’s not coming.” Then he added: “I’ll tell you straight up: in September and October, when all of that was going on, we weren’t one of the crisis response options for CentCom (U.S. Central Command).”

Donovan, a veteran of four MEU deployments, attributed that in part to the fact that during a decade of land wars, the Marines have gotten away from their seaborne past. The service has long kept three numbered MEUs on each U.S. coast – the 22nd, 24th and 26th on the East Coast and the 11th, 13th and 15th on the West – as well as one on Okinawa, the 31st MEU. During the wars in Iraq and Afghanistan, though, manpower demands have meant those MEUs left home less often. “Before 2006, we deployed two MEUs per coast per year,” Donovan noted. “Right now it’s one MEU per coast per year.”

The wars have thus kept many officers and marines from ever serving in a deployment at sea such as the Iwo Jima ARG/24th MEU did last year. “We have 10 years of a lot of Marine leaders who haven’t been on a MEU,” Donovan said. “Even if you were on a MEU in the last 10 years, you might have just been on a big, gray ferry that brought you to Kuwait and you offloaded and drove up into Iraq. If you look at our experience base inside of our own house right now, there are O-6s (colonels) and maybe some more senior folks on these different level staffs who don’t really know what a MEU brings to the fight.”

Gen. (Ret.) Alfred Gray, a former Marine Corps commandant who chairs the Potomac Institute board, interrupted Donovan to reinforce his point. “The same thing happened after Vietnam,” Gray said. “You had very few Marines that had ever been aboard ship. There are very few people in the Navy who could get up and do what Capt. Garcia did this afternoon. It’s almost a lost art, because it hasn’t been on their radar. They haven’t been thinking about it. There are very few admirals who could really conduct an amphibious exercise, much less an operation, today, with all that that means.”

Donovan said his impression was that the 24th MEU was regarded as a “theater reserve” force not to be used for smaller missions. “We often get caught waiting around for the ‘big one,'” he said. “Our take is, we can do them all. We can do the big one…but we can also do all these crisis response missions.”

As an example of what his and Garcia’s team might have done, Donovan and his intelligence officer, Maj. Van Osborne, described a plan the ARG/MEU staff worked up to evacuate the ambassador and 36 other Americans from the U.S. embassy in Sudan, which like the British and German embassies was virtually under siege by angry rioters last September. “No one else can do this,” Donovan asserted, noting that Khartoum lies 425 nautical miles – nearly 500 statute miles – inland from the Red Sea.

Under the plan, all three ships of the ARG would sail up the Red Sea near the Sudanese coast. Two groups of three Ospreys – one group carrying marines — would launch from the Iwo Jima and rendezvous over Sudan with two KC-130J aerial refueling tankers. The tankers, assigned to the MEU for its deployment, would be flying from Camp Lemmonier, an increasingly large U.S. base in Djibouti. Harriers would launch from the Iwo Jima as well to escort the Ospreys as they flew to Khartoum. At the embassy, the helicopter-airplane hybrid MV-22Bs carrying Marines would land outside the embassy and the troops would set up a security perimeter. The 37 embassy personnel to be evacuated would board the Ospreys and fly away. Then the other three Ospreys would land to pick up the security team. All the aircraft would refuel again on their way back to the Iwo Jima.

Osborne said the entire mission “from notification to completion” would have taken nine hours.

“We planned missions like this across CentCom, AFRICOM and EuCom – Lebanon, Cairo, the embassy in Mali,” Donovan said. “We did not execute any of these,” he added, but the plans illustrate the somewhat forgotten capabilities a transitory MEU can offer a theater commander. “To pull off a coast and stay in international waters and execute a mission, ship to objective and back again, is part of our Corps,” he said. “It’s part of getting back to our amphibious roots.

Gray said such capabilities will be more valuable than ever as the United States pursues the Obama administration’s planned pivot to the Pacific in national security strategy. The nation really needs 38 amphibious ships to deploy MEUs on a more humane (for sailors and marines) six-month schedule, Gray said, but “38 amphibious ships is beyond the budget capability right now.” Even 34 would suffice, he added, but the “facts of life are that they’re going below 34 by quite a bit.”

“When you go to the Pacific, what’s the first thing that hits you?” Gray asked rhetorically. “Man — it’s big!” To succeed there will require more “maritime power, maritime thinking and maritime knowledge and maritime preparation,” he said. “We’ve got some education to do. We did it after Vietnam; we’ve got to do it now.”