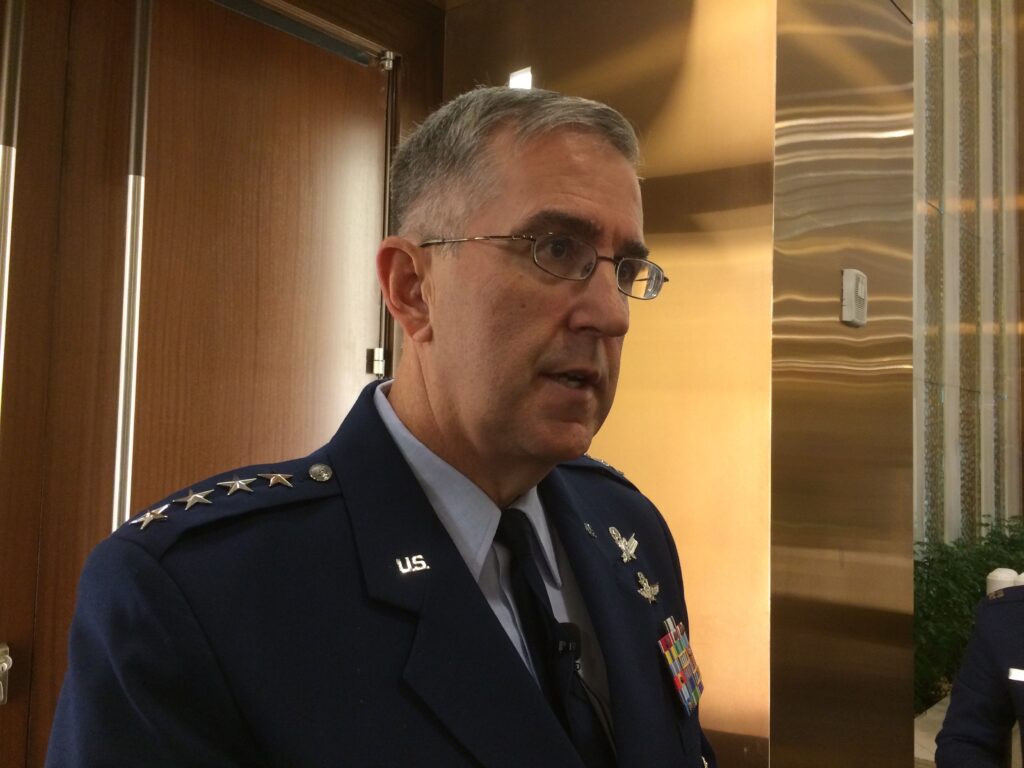 CAPITOL HILL: A subdued Gen. John Hyten slogged through a Senate hearing today that appeared to clear his path to confirmation as Vice-Chairman of the Joint Chiefs of Staff.

One independent count, by analyst Jim McAleese, predicted at most three of the senators present today would vote against the nomination — probably Richard Blumenthal, possibly Tammy Duckworth, and just maybe Mazie Hirono — while the other 19 lawmakers in attendance would support it. Senate Armed Services Committee chairman James Inhofe, who made the hard call to hold the hearing when many doubted he had the votes, proclaimed the committee’s own extensive investigation — including testimony by both Hyten and his accuser and the review of thousands of pages of Pentagon investigative reports — had cleared the general.

While his Republican supporters unequivocally declared him innocent of sexual assault — most prominent among them Sen. Martha McSally, an Air Force veteran and rape survivor herself — his Democratic critics were muted. No one on the committee said they thought he had sexually assaulted Col. Kathryn Spletstoser.

But just after the hearing adjourned, Col. Spletstoser told reporters that she stood by her accusations. She said the investigations by both the Defense Department and the Senate Armed Services Committee itself were fatally flawed, and she challenged their depictions of the facts.

In fact, Spletstoser used stronger language than we’ve heard from her previously to describe one alleged incident with Hyten. “Had he not prematurely ejaculated… he could have raped me,” she said. A few minutes later she returned to the point: “As somebody that had just almost been raped that evening,” she said, then continued after a long and painful pause, “I was just devastated.” 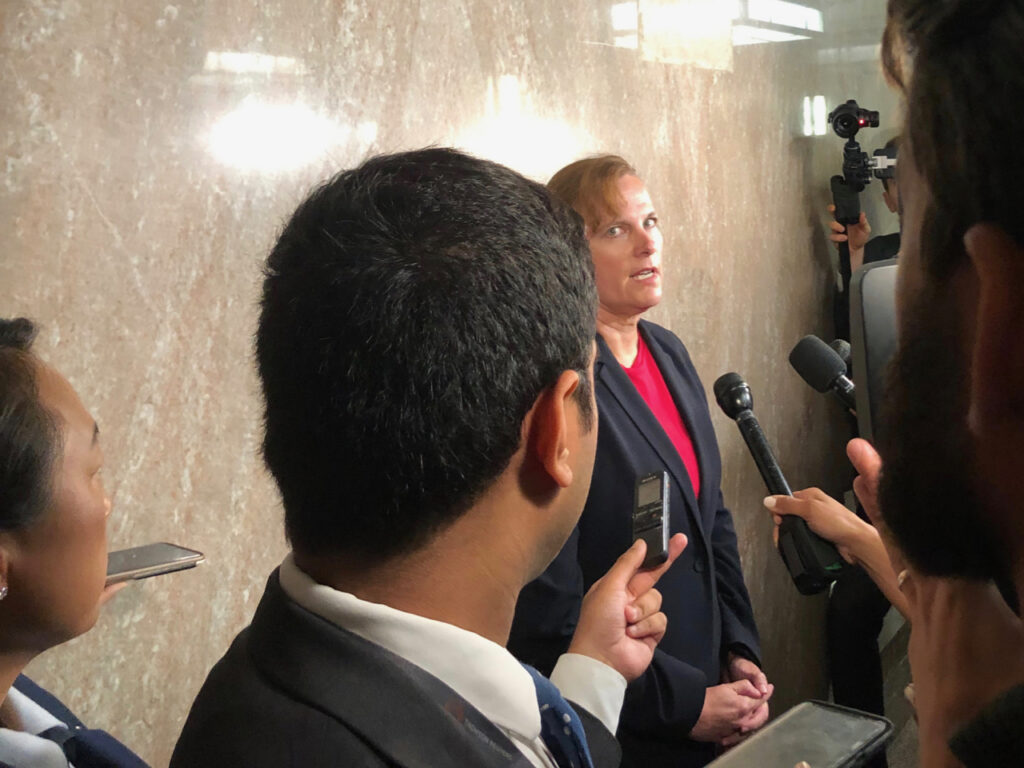 Army Col. Kathryn Spletstoser is mobbed by reporters after the Senate confirmation hearing of Gen. John Hyten, whom she has accused of sexual assault.

But Spletstoser — a 28-year Army veteran with four combat deployments who rose from enlisted soldier to White House Military Fellow — stood more alone than ever this morning. 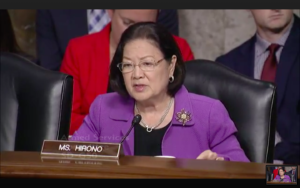 Although the normally self-confident four-star often sounded dispirited and sometimes stumbled in his answers, two leading Democratic crusaders against sexual assault in the armed forces, Kirsten Gillibrand and Elizabeth Warren, did not attend the hearing. Both are presidential candidates and were likely preparing for the Democratic presidential debate tonight in Detroit.

Democratic Sen. Tammy Duckworth, a disabled vet who’s previously pushed the case of Spletstoser, her constituent, began her questioning of Hyten with a query on military logistics. Only then did Duckworth note her dismay that both Hyten’s and Spletstoser’s official cellphones had been partially erased and that Hyten had given other senators only vague suggestions on how to reform the military’s handling of sexual assault.

The two senators who gave Hyten the hardest time today, Democrat Masie Hirono and Republican Joni Ernst (another veteran and rape survivor), spent little time on Spletstoser’s accusations against him. Instead, they focused on why Hyten did not move more quickly against Spletstoser, who was investigated and dismissed for being a “toxic leader” who mistreated and demoralized her own subordinates.

The ranking Democrat on the committee, Jack Reed, also questioned Hyten’s slowness to act against Spletstoser, but Hirono and Ernst were far more forceful. Both senators told Hyten he should have acted on complaints about Spletstoser’s leadership style much earlier instead of repeatedly praising her performance. Hirono suggested he had a “blind spot” towards the Army colonel and Ernst said Hyten only acted against her after his own leadership was called into question for keeping such a difficult leader in place under his command. 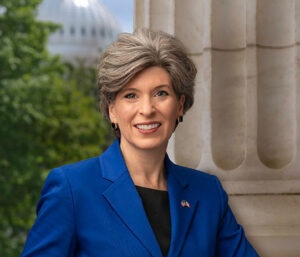 The reason for this line of questioning was unclear. Perhaps the intended implication is that Hyten unduly favored Spletstoser because he was infatuated with her, then turned on her when she reported his advances. If it was, however, neither Sen. Hirono nor Sen. Ernst said so out loud.

Hyten repeatedly took responsibility for being slow to act. He initially downplayed the complaints, he said, thinking it was friction between Strategic Command’s majority of Air Force and Navy officers and a rough-edged Army officer, Spletstoser. Only after he read an Army investigation into Spletstoser, and the 2017 Army regulation on toxic leadership it cited, did he realize what he was missing about a subordinate he considered a star.

“The nature of the toxic leader is they are brilliant to the boss. She was so brilliant in her work,” Hyten said, and again later: “You need to understand she was brilliant, she was doing spectacular work…”

Hyten’s words, ironically, were the highest praise anyone at the hearing offered for his accuser.

No one on the SASC supported Spletstoser, but two prominent women present supported Hyten unreservedly and even suggested his accuser was a mentally ill woman in need of help. 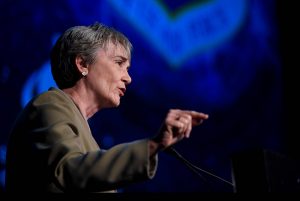 “I believe the Senate will come to the same conclusion that I did — that General Hyten was falsely accused and this matter should be set aside as you consider his nomination,” said former Air Force Secretary Heather Wilson, who oversaw much of the investigation into Hyten but left at the end of May. “It is entirely possible that his accuser is a wounded soldier who believes what she’s saying is true, even if it’s not. That possibility makes this whole situation very sad.”

While Wilson’s own judgment and reputation were at least somewhat tied up with Hyten’s, it was remarkable that she came back to Washington to speak on his behalf this morning.

Hyten’s other outspoken supporter today was Sen. McSally, a former A-10 attack jet pilot who has publicly spoken about being raped three decades ago by a fellow Air Force academy cadet. Her credentials on this agonizing subject, and her extensive work on the Hyten investigation, led her Republican colleagues — Ernst excepted — to defer to her repeatedly, even bumping her ahead of nine senior senators in today’s speaking order. 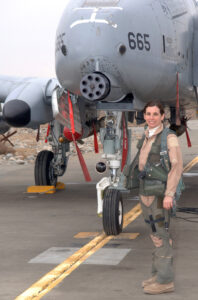 Then-Lt. Col. Martha McSally with her A-10 “Warthog” attack jet.

“As a 26-year veteran and member of this committee…I do not take the allegations made against Gen. Hyten lightly,” McSally said. “As a result of the exhaustive process and extreme due diligence, I have full confidence in General Hyten’s ability to the next vice-chairman of the Joint Chiefs of Staff. He is the right leader at the right time…and I am confident he will continue to serve in uniform with honor, humility, and integrity.”

“This wasn’t just a jump ball, not a he-said, she-said, not a situation where we just couldn’t prove what allegedly happened,” McSally continued. “The full truth was revealed in this process. The truth is that Gen. Hyten is innocent of these charges. Sexual assault happens in the military, it just didn’t happen in this case.”

“I pray that the accuser gets the help she needs and the peace she is searching for, but it cannot be by destroying Gen. Hyten,” she said.

“There is no evidence anywhere and never will be that I’m lying because I am not,” Spletstoser said after the hearing. “I am telling the truth.” Visibly struggling to stay stoic in the face of strong emotion, the colonel said that neither McSally nor Wilson ever spoke to her directly about their disbelief.

Spletstoser did testify to the Armed Services Committee, but behind closed doors. So, asked one reporter, does she now want to testify publicly?