IWI’s US division already sells weapons to the general public, including variants of the iconic Uzi machine pistol and the Tavor assault rifle. The Tavor’s compact “bullpup” design, which puts the trigger in front of the breech and ammunition magazine, is fiercely debated among those who shoot, but the distinctive look has made it a favorite in Hollywood, especially for bad guys.

The Negev is a more conventional-looking design, a light machinegun (less than 17 pounds unloaded) meant to be easily fired by one man on the move. That makes it comparable to the US military’s M249 Squad Automatic Weapon, built by Belgium-based FN Herstal.

IWI Tavor-7 assault rifle. Note the unusual “bullpup” design with the trigger in front of the magazine and breech.

This is a class of weapon in which US Special Operations Command (SOCOM) is intensely interested, since it’s the heaviest firepower a small team can typically carry. SOCOM already uses two different variants of the standard SAW — the stripped-down Mk 46 (firing 5.56 mm) and the beefed-up Mk 48 (7.62 mm)– and is actively pursuing a replacement assault machine gun (potentially in 6.5 mm).

US special operators are “evaluating different calibers for the light-weight [machinegun] replacement, and we are offering our Negev squad automatic weapon,” Ronen Hamudot, VP Marketing and Sales at SK Group, told Breaking Defense. The size of the potential buy is still under discussion.

The Negev can fire over 700 rounds a minute in full-auto — a bit less than the M249 — or, it can be switched to semi-auto for highly accurate single shots. It already comes in 5.56mm and 7.62mm variants, and IWI says it could be easily reconfigured to take different calibers. While the company didn’t say so explicitly, that presumably would include  the 6.5mm Creedmoor cartridge that SOCOM is now studying or even the 6.8 mm round the regular Army has picked for its Next Generation Squad Weapon, which will have both rifle and squad automatic weapon variants.

The big difference here is that SOCOM is willing and able to buy small numbers of different types of specialized weapons, while the “big Army” emphasizes economies of sale and standardization. That makes special ops a logical first customer for a company new to the US market.

Special operators are particularly keen to get maximum firepower with minimum weight — something IWI plans to address with a forthcoming variant of Negev. “Soon,” Hamudot told us, “there will be an ultra-lite version of this weapon.”

“If we win, it will be manufactured in our US subsidiary,” Hamudot added. IWI US already offers a Negev variant to American law enforcement customers. The company also recently opened a production site in India, partnered with local conglomerate Punj Lloyd Group, to target Asia markets. 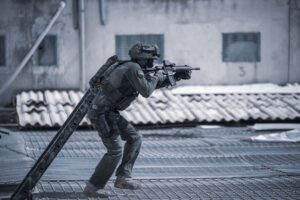 IWI has a long heritage in Israel, actually predating the Israeli state itself. Its origins are in the small arms division of state-owned IMI (Israeli Military Industries), which began building weapons for the underground Haganah movement in 1933. It was spun off and privatized as IWI in 2005, becoming part of the privately held SK Group.

IWI’s marquee products remain the Uzi, which was developed in the 1950s, and the Tavor, whose design was optimized for close-quarters combat after the bitter lessons of the 1982 Lebanon War and which is now the Israeli army’s standard assault rifle.

More recently, the company rolled out the Arad, a lightweight assault rifle (6 pounds unloaded) marketed to infantry and special operations forces. This year, it debuted the slightly larger Carmel (7.3 lbs). Neither new rifle, interestingly, uses the Tavor’s controversial bullpup design. Both are designed to easily swap in and out modular accessories such as targeting scopes. Both are chambered in the same NATO-standard 5.56 mm caliber that both SOCOM and the US Army are now moving away from — but the company plans to roll out alternative calibers for the Arad soon.

If IWI succeeds with the Negev, expect to see these other weapons surface in more US competitions to come.