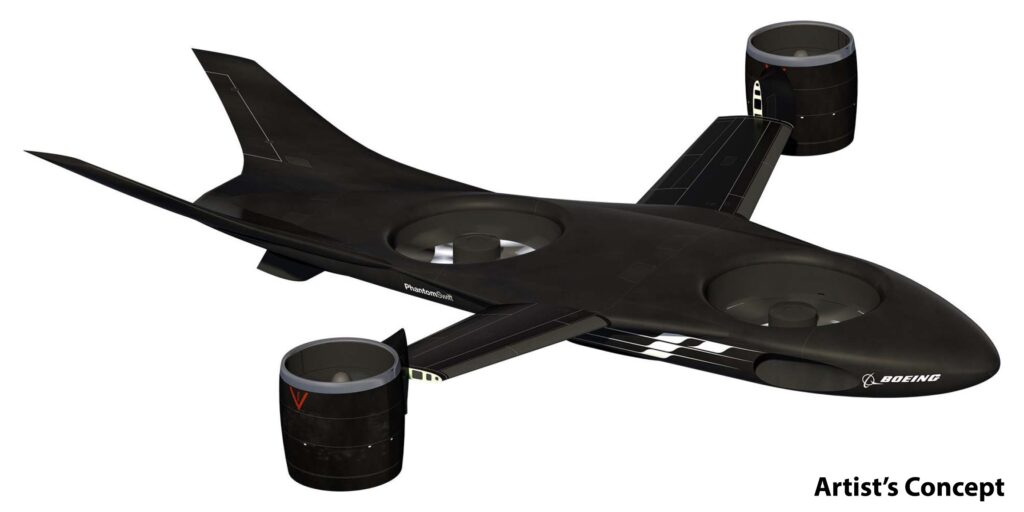 In the 1934 film “It Happened One Night,” fictional slime ball “King” Westley shows off by floating to a landing on the lawn of his fiancée’s daddy’s estate in a newfangled autogiro – an airplane with a rotor to enable short take offs and landings. Today, two Defense Department programs are striving to meet the same aeronautical challenge that inspired the autogiro: How to design an aircraft that can do “substantially everything that a bird can do in the air,” as 1930s aeronautical engineer Alexander Klemin described the ideal flying machine.

Helicopters can take off and land most anywhere and hover, but the aerodynamics of rotors mean they don’t fly very fast. Fixed-wing planes can fly fast but need runways to take off and land and can’t hover. Designing a machine that can launch and return without a runway, fly fast and hover with ease proved impossible in powered flight’s first century, but the military wants its next generation of troop and cargo transports and gunships to do all of those things. The tiltrotor V-22 Osprey, which tilts two large wingtip rotors upward to fly like a helicopter and forward to fly like an airplane, is the only operational aircraft that comes close. But, for several reasons, the Osprey is far from ideal in a hover.

The Army and other services hope to breed new and phenomenally agile and speedy aircraft through the $350 million Joint Multirole (JMR) program, a technology demonstration under the Pentagon’s Future Vertical Lift (FVL) initiative. The FVL, a soaringly ambitious project, aims to give birth over the next few decades to Kleminesque aircraft for the four services in four different sizes: light, medium, heavy and ultra-heavy.  The JMR and FVL projects aim to develop a medium-sized solution first.

The Defense Advanced Research Projects Agency (DARPA), meanwhile, is pursuing a far narrower but even bolder attempt to make a great aeronautical leap forward. DARPA’s   program (VTOL X-Plane), is separate from the JMR. But if VTOL X-Plane produces technologies that can improve whatever JMR comes up with, the Army-led JMR could certainly make use of such innovations.

The candidate designs, offered by some of the best rotorcraft producers and most inventive aeronautical engineers around, include new types of tiltrotors, compound helicopters with innovative mechanisms for vertical and horizontal thrust, and exotic technologies such as “distributed electric propulsion,” in which a conventional gas turbine engine produces electricity to run fans powerful enough to propel a vehicle through the air.

The difference between JMR and VTOL X-Plane, said Michael Hirschberg, executive director of American Helicopter Society International, is like the difference in football between a short yardage pass and a Hail Mary. “JMR is looking at the best industry can do today with the current state of the art,” Hirschberg explained. “The VTOL X-Plane is really more of a technology demonstrator for pure technology: what is the absolute art of the possible?”

For JMR, the Army is seeking attack and utility versions of an aircraft weighing about 30,000 pounds at takeoff that can fly faster than 230 knots (about 265 miles per hour) – better than 100 miles per hour faster than most military helicopters cruise. The utility version must be able to carry 12 troops about 230 miles, loiter half an hour, then return to base without refueling. The craft also must be able to hover at 6,000 feet above sea level in air as hot as 95 degrees – a standard rotorcraft metric — and be shipboard compatible in Navy and Marine Corps versions.

The VTOL X-Plane is to be a far smaller and more exotic bird. DARPA wants a technology demonstrator that will fly at “sustained speeds” of 300 to 400 knots – 345 to 460 miles an hour. The VTOL X-Plane must weigh only 10,000 to 12,000 pounds, with at least 40 percent of that weight “useful load,” meaning what the plane can lift and carry beyond itself. At least 12.5 percent of the plane’s total weight must be payload, meaning everything beyond the aircraft, its crew and fuel. A UH-60M Black Hawk, for comparison, has a gross weight of 19,382 pounds and carries a useful load of 6,882 pounds, or 35 percent, according to manufacturer Sikorsky Aircraft Corp. 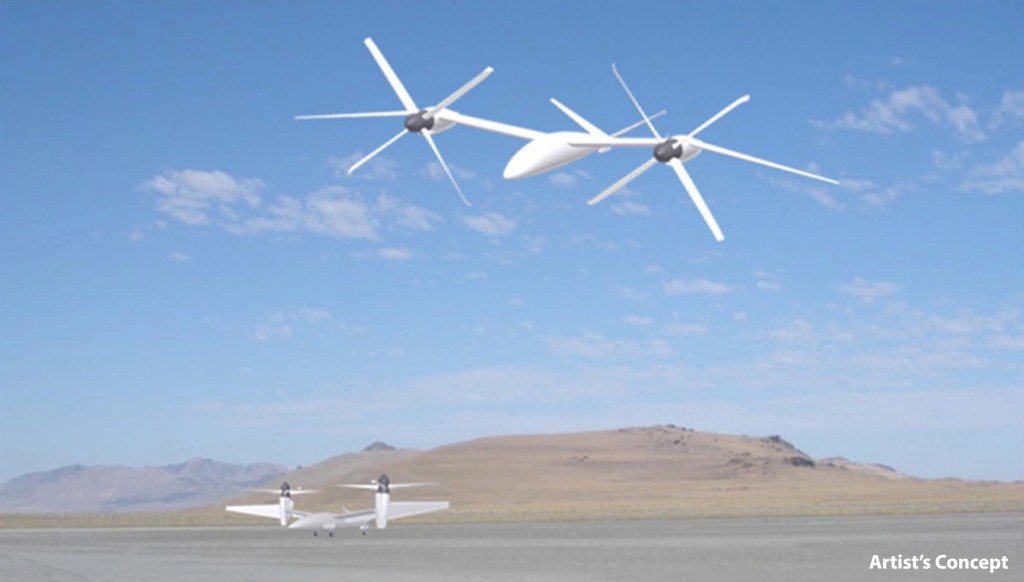 The VTOL X-Plane must also fly with about half as much aerodynamic drag as standard helicopters do and hover at a “figure of merit,” an engineering term, of at least 75 percent rather than the more typical 60 percent of thrust a rotor could theoretically achieve from available engine power – a common measure of hover efficiency.

Each program has four entrants, with overlap that creates interesting teams. In a selection scheduled for next October, DARPA will choose one company to build the VTOL X-Plane and flight test it in 2017-18. All the contenders are offering unmanned aircraft, which are easier to build because they require no cockpit, and in theory can substitute fuel or payload for cockpit and crew weight. The entrants, some or all of whom are investing their own money in addition to receiving cash from DARPA in the $130 million program, are:

The JMR entries use far more familiar and proven technologies. Bell Helicopter Textron Inc., which builds the V-22 in partnership with Boeing, is offering a clean sheet design tiltrotor it calls the V-280 Valor. Sikorsky and Boeing have teamed to offer a compound helicopter with a coaxial rotor – two counter-rotating blades positioned one over the other — and a pusher propeller to overcome speed-sapping rotor aerodynamics. This so-called SB>1 Defiant – the odd type-model designation signifies “Sikorsky and Boeing are greater than one” – will be based on Sikorsky’s X2 high speed technology demonstrator and the derivative S-97 Raider, a prototype the company developed for an Army armed scout helicopter program that’s been put on indefinite hold for lack of funds. 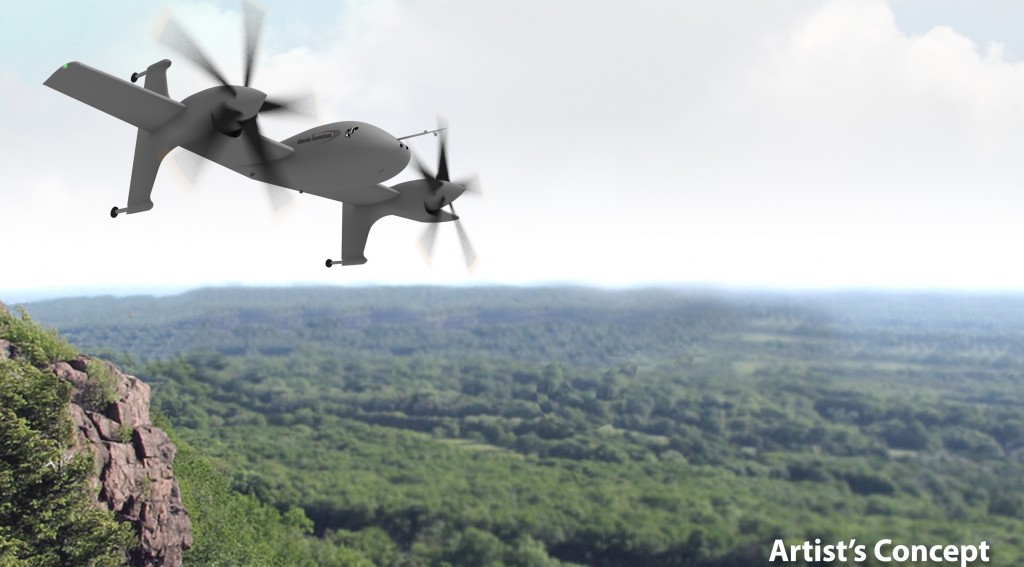 The JMR office has awarded Bell and Sikorsky/Boeing contracts to cover part of the cost of building V-280 Valor and SB>1 Defiant demonstrator models. Two other competitors — Karem with an OSTR tiltrotor proposal and AVX Aircraft, a Texas design company offering an innovative coaxial helicopter with ducted fans for forward thrust — failed to win contracts to build aircraft but are hoping to receive smaller awards to keep working on their ideas.

The Army hopes to start replacing its mainstay UH-60 Black Hawk and AH-64 Apache helicopters with aircraft derived from the JMR by 2034 – a mere century after the autogiro’s cameo in “It Happened One Night” made Klemin’s  “mastery of the air” dream seem just over the horizon.