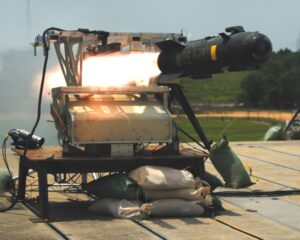 WASHINGTON: The US military successfully targeted and destroyed a moving truck from a drone using the missile designed to replace the venerable Hellfire.

The Joint Air To Ground Missile (JAGM) was fired May 25 at a truck traveling at 20 mph from a Grey Eagle drone at Dugway Proving Ground, Utah. The truck was hit and destroyed. Col. James Romero, with the Army’s Missiles and Space Program Executive Office, said the missile flew a bit farther than 8 kilometers at a “nominal altitude.”

This was the missile’s seventh test but the first time it was fired from a drone. It’s already been tried on Army Apaches and the Marine Corps Cobra helicopters.

JAGM was originally developed to replace the Maverick on the Navy F/A-18E/F Super Hornet, as well as the Hellfire and missiles on the Army’s AH-64D Apache attack helicopter, the Army’s Extended Range Multi-Purpose Sky Warrior drone (which became the Grey Eagle), the Marine’s AH-1Z Super Cobra attack helicopter, and the Navy’s MH-60R Seahawk.

It’s now meant only to replace the Hellfire and some TOW missiles, so the program’s value, which industry sources had pegged at somewhere around $5 billion, may be lower — though it’s hard to tell.

The Army will test JAGM for safety and lethality starting in August. Romero said they’ll be aiming to get air worthiness certificates so they can be deployed on the helicopters.