WASHINGTON: 60-year-old Air Force bombers joined the Navy’s newest anti-ship missile in a big test of the services’ ability to work together to stage long-range strikes. That’s a critical capability in an era of proliferating precision weapons that can hold US ships hundreds of miles from a fight.

The occasion was Monday’s launch of a Naval Strike Missile from the Littoral Combat Ship USS Gabrielle Giffords at the decommissioned frigate USS Ford off the coast of Guam. It was the first time the NSM has been tested in a live-fire scenario in the Pacific.

Reflecting the way military leaders say they’ll have to fight in any future conflicts, the exercise was a multi-service, multinational affair, featuring bombs dropped from Air Force B-52s of the Expeditionary 69th Bomb Squadron, missiles launched from maritime patrol aircraft, and surface-to-surface Harpoon missiles fired from two of Singapore’s frigates, the RSS Formidable and RSS Intrepid, according to a Navy release.

Combining operations on sea, air, land, space, and cyberspace is the central concept of the Army-Air Force concept of Multi-Domain Operations, which the Navy and Marines aren’t yet fully on board with.

Raytheon and Kongsberg were awarded a $14.8 million contract in May 2018 to supply the first missile to be incorporated on to the two Littoral Combat Ship variants, part of a deal that could be worth $847 million if all contract options are exercised. The weapon, which packs a 264-pound warhead and a 115-mile range, is envisioned as a way to keep the LCS relevant, allowing it to operate in environments where enemy standoff weapons would otherwise hold it at bay.

“LCS packs a punch and gives potential adversaries another reason to stay awake at night,” Rear Adm. Joey Tynch, commander, Logistics Group Western Pacific said in a statement. “We are stronger when we sail together with our friends and partners, and LCS is an important addition to the lineup.”

Despite years of fits and starts, and plenty of debate over what role the LCS might play in operations given its inability to either protect itself or inflict much damage on the enemy, the Giffords is now the first LCS to deploy with the new weapon. 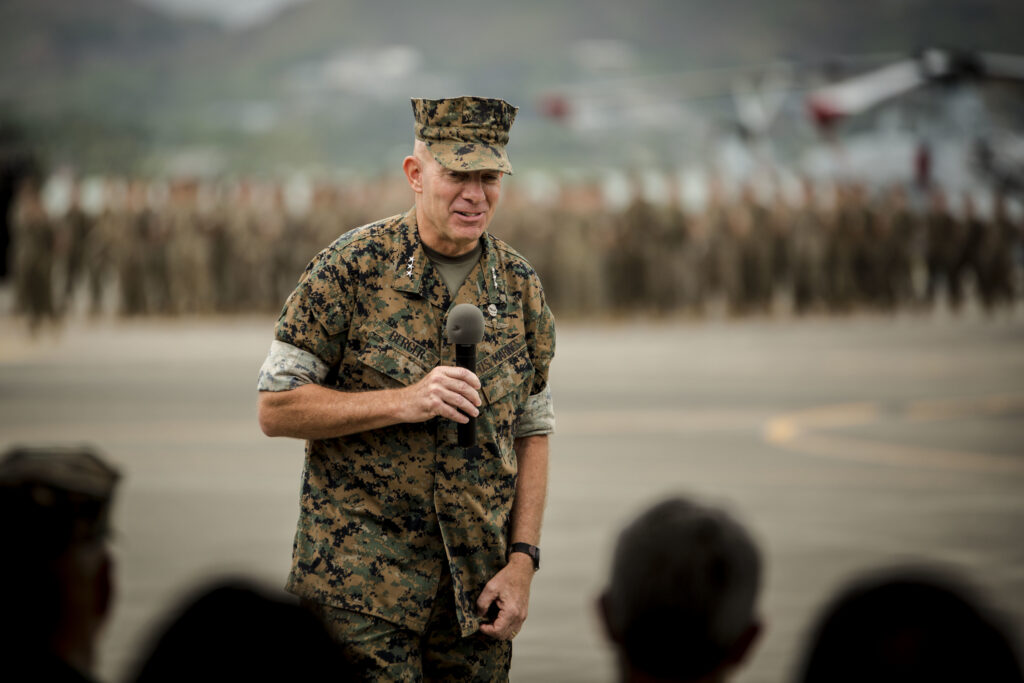 What the Marines Want

The deployment of the NSM is significant not only for the Navy, but also the Marine Corps, which is undergoing an intense round of soul-searching over how it will push ashore from the sea in an age of long-range precision weapons, as new Commandant Gen. David Berger yelled from the mountaintops in his new guidance to the force.

One thing the Corps wants to add to its list of capabilities is covering down for the Navy from small, ad hoc bases ashore as a way to create space on the land, sea and in the skies. Last year, the Corps kicked off an effort to fire long-range anti-ship missiles from shore-based ground vehicles, dubbed the Navy-Marine Expeditionary Ship Interdiction System, or NEMSIS. The plan is to start testing in early 2020 with one of a short list of possible missiles, which may end up being the Kongsberg NSM.

The effort should be reflected in the forthcoming Integrated Force Structure Assessment, a joint project between the Navy and Marines to figure out a way to project power forward. The goal is to more closely align their doctrine, training, and equipping plans to compliment one another, rather than the Navy simply providing lift and cover for the Corps.

The new force plan was outlined in a memo by Berger and the new Chief of Naval Operations,  Adm. Mike Gilday, that the two service chiefs sent to the Secretary of the Navy Richard Spencer last month. 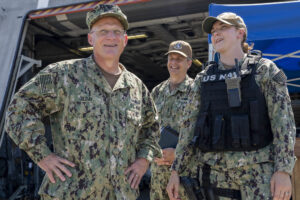 The “interim” study was due to be wrapped up at the end of September, wargamed in November, and then incorporated into a document slated to be released by the end of this year, according to the memo, first reported by USNI.

Navy spokesperson Lt. Brittany Stephens told me in an email that the integrated Force Structure Assessment “represents a new level of integration and coordination between the Naval Services. We look forward to working together with the Marines as the FSA progresses.”

The memo doubled down on the the recent talk coming from the Navy and Corps about more closely integrating their planning, equipping and operations.

The document started things off on the right foot, stating that the Navy “has a unique opportunity to systematically re-examine our requirements and identify the naval force needed to meet the challenges of Great Power Competition,” underscoring that “Naval integration is the cornerstone of our future naval force, and the challenges facing our nation demand that we fully leverage the strengths of both naval services.”

Speaking with reporters in August at the Pentagon, Michael Stewart, the Navy’s deputy director of integrated warfare, called Berger’s guidance document “breathtaking in terms of how it talks about the naval — not Navy and Marine Corps — but naval forces, and the recognition that to solve the problems we’re up against, we have to be a naval force and we have to be linked at the hip.”

As plans stand at the moment, the coming assessment will impact the Navy’s 2021 budget request and 30-year shipbuilding plan. The analysis will also present a plan to more fully “assess an optimal force mix that includes Large Unmanned Surface Vessels, Extra Large Unmanned Undersea Vessels, and Expeditionary Advance Bases,” which is a capability that both naval forces have said is a critical gap they’re rushing to fill.