It is not Iron Man. It isn’t even Iron Fist. Lockheed Martin’s newest exoskeleton is more like Iron Leg. But for a soldier humping his weapons, ammo and body armor up a mountain in Afghanistan or a high-rise building in a future urban battle, a device to take the load off would be welcome. And, unlike science fiction supersuits, we can build it now.

Exoskeletons are part of the Pentagon’s Third Offset Strategy, which seeks to use robotics and artificial intelligence to enhance humans on the battlefield, rather than to replace them. There’s no area where the need is more acute than in the infantry, which takes the vast majority of casualties. 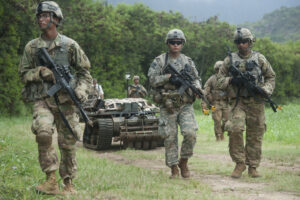 A Punisher unmanned ground vehicle follows soldiers during the PACMAN-I experiment in Hawaii.

One particularly persistent problem: weight. US foot troops have been overburdened since at least D-Day, where some men drowned in shallow water under their heavy packs. The problem has become especially acute since 9/11, with US troops in body armor laboring to chase Taliban in flip-flops. The military is constantly looking at ways to make equipment lighter, but those improvements are mainly on the margins, a pound shaved here or there. It’s also experimenting with wheeled or tracked robots that can carry some of a squad’s equipment, but these robotic mules can’t yet keep up with nimble infantrymen over rough terrain.

So if you can’t lighten the soldier’s load, and you can’t take it off him, can you make him stronger? Nowadays, the answer is yes: We have the technology. 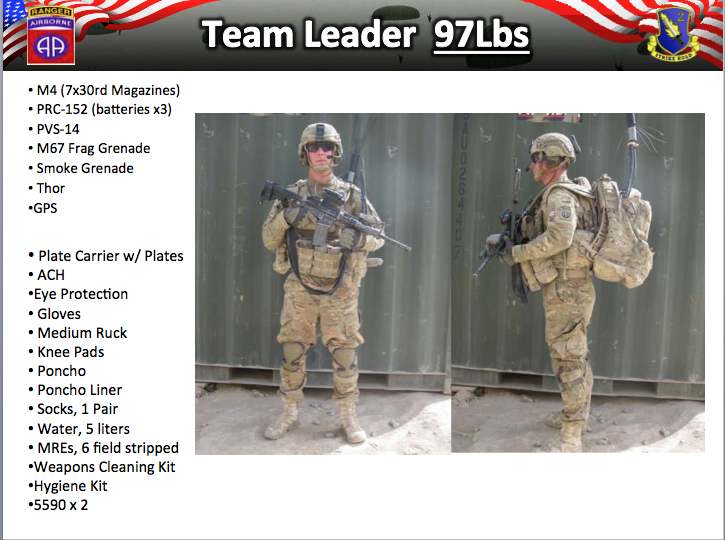 The Lockheed exoskeleton’s full and unwieldly designation is FORTIS Knee-Stress Relief Device (K-SRD), which makes it sounds like a piece of molded plastic your insurance would refuse to cover. In fact, it’s a sophisticated synthesis of multiple technologies:

In tests, elite Tier One special operators wearing K-SRD found they could do twice as many squats lifting 185 pounds of weight, going from an average of 20-25 reps to over 50. There were similar improvements climbing stairs carrying a 185-lb simulated casualty, said Lockheed product manager Keith Maxwell, a former Navy and “Other Government Agency” operator himself. “It literally pushes you up flights of stairs,” he told me. “(You) do it faster, with much less fatigue.” 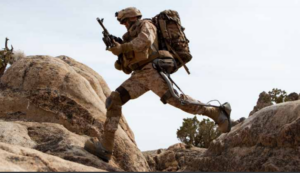 However, the gains are greatest with vertical movement and least on level ground, Maxwell emphasized. On a 15-degree slope, he said, the device reduces the human’s energy expenditure — the “net metabolic cost” — by only about 9 percent. On level ground, it doesn’t save any energy, he said. Why? Humans evolved over millions of years for long-distance chases across the savannah: The theory of persistence hunting suggests our ancestors, lacking bows and arrows, simply ran after prey until it collapsed from exhaustion. Nothing modern technology can make is likely to improve on human performance over level ground, at least any time soon.

With K-SRD on level ground, said Maxwell, “what we’re able to do is break even” — which is a marked improvement over past exoskeletons. Lockheed spent years on an 85-lb rigid exoskeleton called HULC (Human Universal Load Carrier), which was good at carrying heavy weights but lousy at matching human movements. “The problem was that terrain is irregular and human gait is infinitely variable,” Maxwell said, so HULC’s computer kept misunderstanding what the wearer wanted to do and moving the wrong way. Overall, Maxwell said, walking around in a HULC actually cost 15 to 25 percent more energy than having no exoskeletal “help” at all. 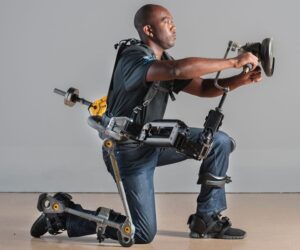 Lockheed moved on to the less ambitious FORTIS, essentially a rigid support frame — it doesn’t require electricity because it doesn’t have actuators — that could help factory and shipyard workers handle heavy tools without fatigue. The wearer has enough mobility to relocate, tools in hand, to another worksite within 100 yards, but the industrial FORTIS far too awkward for the battlefield.

The FORTIS K-SRD, by contrast, uses its mix of rigid and flexible components, and a much more sophisticated set of algorithms than HULC, to move with the wearer’s body. Testers were able to operate it with only 15 minutes of training, Maxwell said, and some of the special operators didn’t bother with the training at all.

“They can run, they can climb, they can squat,” Maxwell said. They can hit the dirt, take cover, and crawl, then jump up and dash forward and take cover again. They can even walk along a balance beam although for such precision movements he recommends turning the strength-magnifying actuators off, done with a simple thumb movement on the controls. One tester even found his K-SRD comfortable enough to sleep with it on.

The Case Against Iron Man

After decades of exoskeleton development, Lockheed wants to get this device out into the field soon. The K-SRD team is working mostly closely with the Army’s Soldier Systems Center in Natick, Mass., which they expect to buy a number of K-SRDs for test purposes and institute a Cooperative Research & Development Agreement (CRADA) in the next 30-60 days. Other partners include the Army’s Rapid Equipping Force and the Marine Expeditionary Rifle Squad initiative. Lockheed is even working with the Department of Homeland Security and some foreign fire departments on potential firefighting and rescue applications, since those also involve heavily burdened humans climbing up and down with life and death and stake. 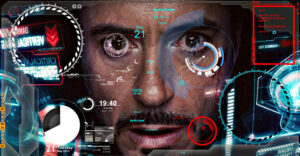 “Can we have an up-armored solution that’s capable of breaching and entering and being relatively invulnerable to 7.62 AP (armor piercing) bullets at point-blank range? Yeah, we can do that,” said Maxwell. That said, it’d probably be heavy and slow, far from the flight-capable suit in the comics.

“Iron Man has…hurt exoskeleton development,” Maxwell said, because it’s created impossible expectations — literally impossible, since the CGI suit in the movies routinely violates the laws of physics. When Iron Man drops from the sky to a neat three-point landing, in particular, the sudden deceleration would liquefy Tony Stark inside the suit.

That’s the so-called centaur model of human-machine teaming at the heart of the Pentagon’s Third Offset Strategy. It’s the synergy of a human imagination and agility controlling the strength and speed of a machine, like the mythical centaur combining rider and horse into a single being.

“As long as there’s judgment (required) in situations in which the person is going to have to make a call, we’re going to want a human in the loop. Eventually, if we can get machines to do that for us…we’ll just make these robots,” Maxwell told me. “Until then…you take the absolute best human beings and combine them with the absolute best in machines.”