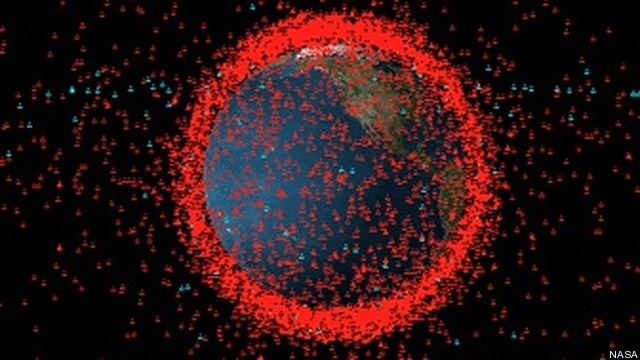 Space debris in orbit around Earth

“It’s a real serious issue with debris,” Rick Ambrose, executive vice president for Lockheed Martin Space told reporters here yesterday. “So, I think there are going to have to be some multinational policies” for “how you conduct yourself in space.”

To that end, Ambrose said he has “volunteered my satellites to be rated” by the World Economic Forum’s (WEF) new coalition working on a ‘seal of approval’ scheme that incentivizes industry to take action to maintain the space environment.

The WEF announced the partnership last month at Satellite 2019 with the European Space Agency (ESA) and the Space Enabled Research group at MIT’s Media Lab, and supported by University of Texas and Bryce Space and Technology, to create a so-called ‘Space Sustainability Rating.’ The goal is to define how well individual satellites — or a constellation — is following current international guidelines and recommended best practices to ensure the long-term sustainability of near-Earth orbit. This includes looking at active satellite operations — such as the ability to maneuver to avoid collisions — and end-of-life disposal plans.

The rating system will use publicly available data about satellites and/or information provided by operators. Nikolai Khlystov, who leads the WEF project, told me during Satellite 2019 that he hopes to have a final version of the rating scheme completed within the next two years.

Lockheed Martin will become one of the first companies to submit to the fledgling rating process as WEF attempts to work out the exact parameters, Ambrose said, along with Airbus. He added that he is meeting today with WEF representatives here to work on how to proceed.

Ambrose said that one of the problems with managing space debris is that no one wants to pay the price to clean it up. Meanwhile there is a growing proliferation of satellites, especially in Low Earth Orbit (LEO), that are not equipped to undertake even the most basic debris mitigation measures — primarily small Cubesats that currently fall between the cracks in the US regulatory system. (Traditional satellite owner/operators are required to provide the US government with a debris mitigation plan in order to obtain licenses.)

Ambrose said that rules are needed to require all satellite operators, including those using Cubesats and other tiny satellites, to be able to de-orbit from LEO at the end of their lives in order not to create hazards for other spacecraft. “I think that needs to happen,” he said, “but it’s not something I can set up. Even for the [WEF], we can only recommend. It’s going to have to be government to government, and multiple agreements, to say here’s how as a society we are going to conduct ourselves [in space.]”

India on March 27 became the fourth nation to test an ASAT weapon against a satellite, using a ground-launched missile. China did the same in 2007. The US and Russia tested other types of ASATs in through the 1980s. The US also destroyed a satellite in LEO using a ship-launched missile defense interceptor in 2008 although Washington insisted at the time the action was not an ASAT test.

UPDATE BEGINS: The WEF effort is a follow-up of sorts to the effort by the UN Committee for the Peaceful Uses of Outer Space (COPUOS) to develop an internationally agreed set of voluntary guidelines for best operational space practices. The initiative, which began in 2010 and finished in 2018, was undertaken by the Working Group on the Long Term Sustainability of Space Activities, LTS for short. The US, China, and Russia were all active participants. While the group managed to approve 21 guidelines, the effort ended in June 2018 after Russia — in a snit over the group refusing to accept seven of its proposals — refused to allow the report to be formally referred to the UN General Assembly.

UPDATED UPDATE: But, in a breakthrough today, COPUOS today in its annual meeting decided to adopt the 21 guidelines anyway, and further decided to continue work on best practices under a new working group — reflecting the intense international interest right now in trying to ensure that space does not become either a tragedy of the commons, or a debris-littered battlefield where nothing can survive.

The guidelines break down into four categories:

They include provisions that encourage nations to improve the trackability of spacecraft including very small satellites, as well as to design satellites “to implement applicable international and national space debris mitigation standards and/or guidelines” in order to limit their long-term presence in orbit. They also encourage countries to exchange orbital data including information about planned maneuvers.

Meanwhile, the UN continues in other subsidiary venues continues to discuss both the development of transparency and confidence-building measures (TCBMs) in order to reduce the risks of conflict in space, and the possible future development of a treaty to prevent an arms race in outer space (PAROS). A UN Group of Governmental Experts (a special study group formed by the Secretary General) on PAROS that began work in 2018 wrapped up at the end of March, and unsurprisingly failed to reach a consensus — given that the US has long opposed any such treaty, and especially the draft being touted by Russia and China (called the Prevention of the Placement of Weapons in Outer Space, the Threat and Use of Force Against Outer Space Objects or PPWT for short) — for a number of arguably good reasons. The UN Disarmament Commission meanwhile has established an ongoing working group on TCBMs that the US is supporting.

While Lockheed is only one company, as a major defense contractor its participation in the norm-setting effort is interesting as a potential influencer on the Trump Administration, that has been more reluctant to actively participate in international efforts to set rules of the road for space than the previous administration.