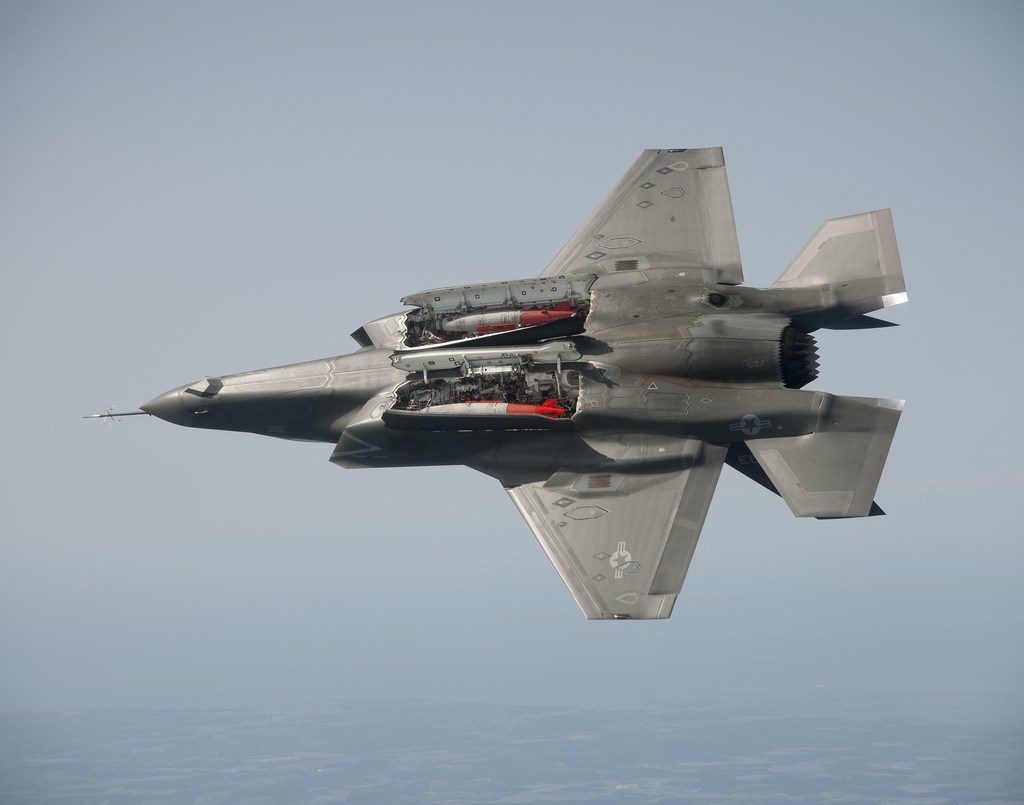 WASHINGTON: Critics have long pointed at the F-35’s weapons load of four missiles in stealth mode and said it’s just not enough.

That argument seemed to gain weight when the F-15X was recently praised by senior defense officials for its ability to carry many bombs and missiles and work with the F-35’s targeting sensors to rain death and destruction on the enemy.

Now I’ve confirmed with Lockheed that they’ve proven out a way for the F-35 to carry two more missiles in its internal bay.

“With internal research and development over the last several years, Lockheed Martin has matured design concepts to integrate 6 air-to-air missiles within the internal weapons bays of the F-35A and F-35C variants,” spokesman Michael Friedman says in an email. “This effort allows further enhancement of the F-35’s lethality and survivability by increasing internal weapons capacity by two additional missiles while remaining in Very Low Observable stealth configuration.”

How do they fit more missiles in? A rack adaptor allows them to add a second missile onto each of the outer stations of the internal weapons bays. So rather than carrying two missiles on the two stations in each bay, they can carry three each.

The news from Lockheed about the two more missiles was greeted by veteran aerospace analyst Richard Aboulafia as proof that Lockheed is feeling the heat from Boeing’s F-15.

“The one place they are going to get hit on is payload,” the Teal Group analyst noted. Lockheed usually replies to comments about the plane’s relatively light payload with the response that they’ve got a stealthy aircraft which can get inside the enemy’s kill chain and use fewer weapons because they aren’t detected.

A pilot familiar with the F-35 offered a nuanced view of the boosted firepower. “Increasing the number and range of weapons on our 5th gen platforms is incredibly important to maximizing their advantage. With 5th Gen platforms able to gain access virtually anywhere and anytime, you don’t want them to be limited in effect due to a lack of firepower,” the pilot says. “While the F-22 and F-35 can cue or ‘quarterback’ for other platforms in less contested environments, having sufficient organic capability is an absolute must in the most contested threat environments where stealth is critical and internal weapons are all we have.”

Will adding two more missiles make the difference and help Lockheed blunt the increasing mass of Boeing’s efforts to sell F-15Xs to the Air Force? Lockheed CEO Marillyn Hewson and the Air Force say the F-15s aren’t being bought at the expense of F-35s, but almost no one believes them in the long run. Does Aboulafia believe it?

“No. The best they (Lockheed) can do is use it as a talking point and try to get back some of the aircraft that have fallen out of the budget,” he told me.

What’s next? The services and the Joint Program Office have to decide whether to fund and install it.The process is known as “the Continuous Capability, Development and Delivery (C2D2) framework for Follow on Modernization (FOM)”

If you need proof of how worried the company is, note that Friedman included this in his reply to my questions: “Lockheed Martin is on track to deliver an $80 million F-35A by 2020, which is equal to or less than the cost of legacy aircraft (he means the F-15X). As we develop and deliver upgraded capabilities through the Follow On Modernization phase of the program, our goal is to maintain or reduce costs both in in production and sustainment.”

A senior defense official said the CAPE estimate (the Pentagon’s most authoritative) for the F-15X is $90 million a copy. An F-35A, the comparable plane of the three-aircraft fleet, costs $89.2 million in Lot 11 and the program and Lockheed Martin have both pledged it will go lower, to $80 million.

At the Air Force Association’s February conference, I asked Gen. Mike Holmes, head of Air Combat Command, if his best professional advice would be to buy a mix of fifth- and fourth-generation aircraft.

“As the commander of ACC, I would like to see us buy more new aircraft — period. We need to address the average age of our fleet,” he said. Holmes also said he did not think the F-15X would constitute a new fleet of planes, which could have been an argument against it in budget terms. It’s “more expensive to operate an F-35 than a fourth generation aircraft over time,” Holmes noted. That’s an argument Lockheed will find hard to counter until it and the JPO and the services succeed in improving the flow of parts and bringing down the price of maintenance, which the recent GAO report on F-35 readiness does not offer much hope for.