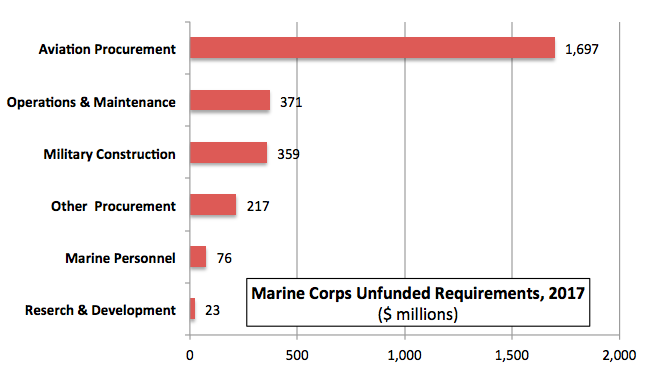 WASHINGTON: Of the Marine Corps’ $2.7 billion in unfunded requirements for 2017 — items that didn’t quite make the president’s budget request — over sixty percent, $1.7 billion, goes to aircraft purchases and upgrades. The next largest category is $371 million for operations and maintenance, the largest single piece of which is $121 million to take better care of existing facilities. $359 million goes for new military construction. In fourth place is $217 million for other procurements from RQ-21 Blackjack drones to a host of command-and-control network improvements.

There’s an old saying about the Marines, “why does the Navy’s Army have its own Air Force?”, and the Marines pride themselves on their unique synergy of air, land, and seapower in a single service. But that combination is expensive, hence the $1.7 billion unfunded requirement for aircraft. (Technically, this is “Aviation Procurement, Navy,” since the Navy buys the Marines’ manned aircraft). The most expensive items in this most expensive category are $750 million worth of F-35 stealth fighters: two vertical take-off & landing F-35Bs and two carrier-based F-35Cs.

A great deal of the military construction is also aviation-related, including the single largest item, $119 million for new maintenance hangers at Miramar airbase in California. Miramar also gets a $40 million parking apron specifically designed to accommodate F-35s.