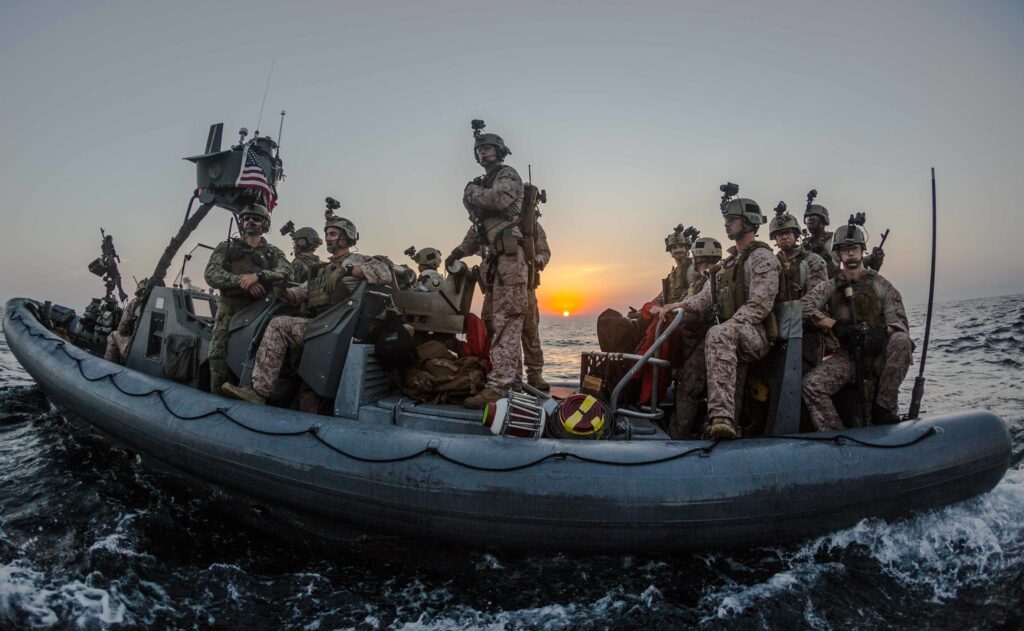 Marines with 11th Marine Expeditionary Unit position their rigid-hulled inflatable boat to conduct a visit, board, search and seizure mission

QUANTICO: In building a vision for how to equip for an era in which its ships, aircraft, and overseas bases exist under constant threat from long-range precision weapons and electronic warfare attacks, the Marine Corps will try and go “smaller, lighter, less exquisite, more numerous,” a top Marine general says.

While all that may sound rather vague, the Corps is grappling with how to implement guidance Commandant Gen. David Berger issued to the force in July, which called for a sweeping overhaul of how Marines equip, train, deploy, and occupy space in the world.

The Corps hasn’t said much about how it’s going to move out on the 23-page document, which questioned cornerstones of Marine doctrine like the need for 38 amphibious ships and supporting a two Marine Expeditionary Brigade-sized forcible entry force. At Quantico on Tuesday, the reason for the silence became clear: Marine leaders are just starting to do the heavy lifting to make it happen.

One of the key architects of the emerging Marine Corps is Lt. Gen. Eric Smith, head of the Marine Corps Combat Development Command. He told the audience at the annual Modern Day Marine event that he’s working on a plan to make the force smaller and lighter.

“We’re looking for ways to make ships more numerous, more autonomous, and more attritable,” Smith said, adding that he thinks “alternate platforms” like unmanned supply ships and expeditionary basing options could partially replace, or bolster, large amphibious ships as the way Marines get to the fight. “There has to be a smarter way to do logistics and supply that we don’t need an [amphib] to do. We’re looking for alternate platforms to take the load off those ships.”

We’ve heard the Marines talk about lighter, cheaper gear before, back when they were deployed by the tens of thousands to the grinding fights in Iraq and Afghanistan. But the desire to go light in order to move across deserts and through mountains ran into the buzzsaw of the IED threat which tore apart lighter Humvees, leading to hulking MRAPs and more body armor, slowing down troops who were tied to static bases that themselves were targets.

But operating in the expanses of the Pacific, where Chinese long- and medium-range missiles can strike from  hundreds and thousands of miles away, or in the tight confines of the Baltic and Black Seas in Europe, where Russian batteries in Kaliningrad and Crimea watch over key waterways, offer their own hard realities. Unmanned ships that act as forward observers and equipment haulers are a necessity in such environments, as big-deck amphibious ships would offer too obvious a target.

Smith used the analogy of going to the grocery store to shop for your family. Due to limited budgets you sometimes have to buy the cheaper, “lesser cheese,” in order to buy more of it to feed your kids, instead of a better cheese that’s more expensive but will run out faster.

That “lesser” cheese argument took several forms during his brief talk. He said the Marines want to buy more things — especially unmanned ships and aerial drones, but they need to be inexpensive, since lots of them will be needed, and there’s a good chance they won’t survive long in a fight. “We’re looking for autonomy, we’re looking for manned/unmanned teaming, and we need to get lighter,” he said.

Another way to put it is, the Corps wants its boats and drones to be and “light, lethal, and affordable.”

So, how do you do that? Col. Tim Barrick of the Corps’ Wargaming Division said he’s growing his staff from 25 wargamers to about 150 in order to do more simultaneous exercises and allow the Corps to do more analytical work.

“We’re looking at a force — despite long-range persistent weapons — to persist forward,” he said. “We’ve got to wrestle with ship mix and their capacity; there’s a balancing act.”

One of the burning questions that has come up since Berger pushed the Corps reset button has been just how many ships the Navy and Marine Corps think they need.

Col. Brian Magnuson, head of the Marine Corps Expeditionary Energy Office, played somewhat coy with the question, punting any guesses until after a couple rounds of wargames and analysis can we wrapped up. The number of amphibs carrying Marines and their gear “could be 18, it could be 138 – I just don’t know,” he shrugged.