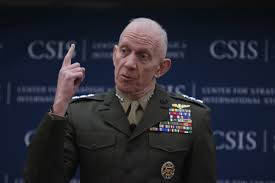 His choice of Paris as the venue for the announcement spoke volumes. The international partners in the F-35 program have expressed considerable unease over the cost increases and schedule problems of the last three years.

One of the keys to bringing those F-35B costs down, Schmidle said, may be doing intermediate level repairs at sea. “That will drive costs down and readiness up,” he told a small group of reporters here yesterday. (Apologies for the late filing but we suffered a catastrophic computer failure thanks to the heavy rains here and were unable to file.)

The Navy is also considering doing this with the Navy’s F-35C, although Lockheed Martin believes it may not be the most cost effective approach to managing aircraft repairs. The F-35, company officials say, was designed to be taken off the flight line when it comes time for repairs.

The Marines tried the intermediate level approach with the V-22 and were able — along with a Performance Based Logistics contract — to substantially increase readiness and push costs down by 19 percent. Schmidle made it clear he thinks the same approach should help with F-35B costs. Because of its short take-off/vertical landing (STOVL) capabilities (click here for video), the Marines’ model is the most expensive F-35 to fly and maintain.

Schmidle (call sign Rooster) said one of the ways to bring down estimated operations and maintenance costs (O&M) is to bang away at what he believes are questionable assumptions. For example, the Defense Department assumed that F-35Bs, the Marines version would operate in STOVL mode for 80 percent of operations. That is highly unlikely, he made clear.

Life cycle costs for the F-35 are politically sensitive in these days of sequestration and military drawdowns, especially since they are estimated to be more than $1 trillion over 50 years (including acquisition).

Among the F-35B milestones Schmidle, Marine deputy commandant for aviation, outlined are the first drogue refueling of an F-35B by a V-22 scheduled for this month. He also said the Marines will probably cross train pilots to fly F-35B and F-35C (Navy carrier) models. They are buying both as part of their 420 plane package. Also, Marine pilots will train at Nellis Air Force Base with the Air Force to ensure all services’ pilots can fight together.