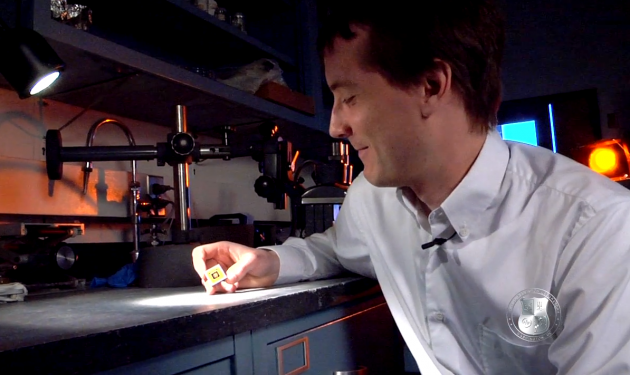 WASHINGTON: Imagine: tiny sensors built into military combat gear to detect chemical or biological weapons; unseen sensors peppered throughout a submarine to detect radiation leaks or chemical contamination of the crew’s precious air; a cellphone — think Star Trek tricorder, flip it open, open the app and bingo! — able to detect the gas of explosives down to parts per trillion that helps to speed passengers through crowded airports. Or you could embed sensors in your refrigerator and it could tell you exactly what was spoiling and whether it was still safe to eat.

All those technologies may be possible thanks to a breakthrough at the Navy’s premier research lab who may be on the verge of unleashing the long-sought promise of nanotechnology. Researchers at the Naval Research Laboratory (NRL) — Christopher Field, Junghoon Yeom, Daniel Ratchford, Hyun Jin In and Pehr E Pehrsson — have figured out how to manufacture nanowires reliably using existing technology.

“The big thing with getting to this point is finding a way to produce this in a scaleable and reproducible fashion,” principal investigator Christopher Field told me. Until now, nanotechnologists have had to grow their nanowires, something that is extremely difficult to do over and over again since each one is created, effectively, by hand.

“We don’t grow our wires. We actually etch our wires with silicon,” Field said, using technology similar to that used by computer chip makers. Basically, the Navy scientists etch a cluster of nanowires and put a small amount of power pulsing through them. When a molecule from an explosive’s gas or a chemical weapon brushes against the nanowires this disrupts the charge. Then scientists analyze the disruption to discover what caused it.

The Navy is most excited about the technology for its application as an explosives detector. Also, Field submitted a proposal yesterday to place these sensors on a firefighting robot the NRL is developing. The goal is to enhance the situational awareness of the robot and enable it to make more informed decisions. Armed with what the Navy has lyrically named Field’s discovery — Silicon Nanowires in a Vertical Array with a Porous Electrode (SiN-VAPOR) — Lucas the robot could detect a fire from the rising levels of carbon monoxide and other gases, go to it and put it out without risking human lives. How? The Navy would plaster SiN-VAPOR sensors all over the robot and around the ship.

A provisional patent has been issued for the nanowire technology. Companies can license the technology from the Naval Research Laboratory and use the nanowire tech to build sensors and develop the algorithm to detect various substances. Field said figuring out what has disrupted the electrical charge pulsing through the nanowires face is “one more major hurdle” to the sensor system. That’s just a case of coming up with the mathematical formulae and chemistry to figure it out. Not easy, but….