Navy Bets On Arleigh Burkes To Sail Until 2072; 40 Years Afloat For Some 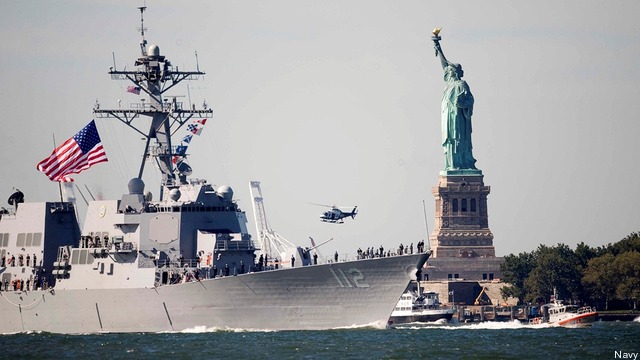 Tomorrow morning, at Manhattan’s Pier 88, the Navy will commission its newest destroyer, DDG-112. The USS Michael Murphy‘s namesake was uncompromisingly heroic, a Navy SEAL who died earning the Medal of Honor in Afghanistan. The ship itself, however, embodies a series of cost-conscious compromises that will keep the Navy sailing a 1980s design — albeit much upgraded –until at least 2072.

These destroyers are and will long remain the Navy’s mainstay. The Arleigh Burke class to which the Murphy belongs is built to carry the Aegis anti-aircraft system that defends the entire fleet, including the prized aircraft carriers. The Chief of Naval Operations himself, Adm. Jonathan Greenert, has explicitly said that the Navy is building the smaller, cheaper Littoral Combat Ships to take on supporting missions, so the fleet can free up destroyers to face the most dangerous and high-tech foes: submarines, long-range missiles, jet fighter-bombers, and more, all integrated into “anti-access” networks like those being developed by the Chinese. Updating the Arleigh Burkes to keep up with the threat will be a heroic effort.

Central to those upgrades is a radically new radar, the Air and Missile Defense Radar (AMDR), using a technology already proven in aircraft called an “active phased array” or Active Electronically Scanned Array (AESA). The “passive” SPY-1 arrays on current destroyers draw their power from a single transmitter inside the ship; “active” systems have hundreds or thousands of tiny transmitters built into the array’s surface, which lets them generate a larger number of more powerful beams, all individually scanning for targets.

“We’re going to be delivering over 30 times the radar capability in the same space,” Capt. Doug Small, program manager for AMDR, told Breaking Defense. That’s essential to track large numbers of incoming enemy aircraft and ballistic missiles at the same time, something current destroyers have only limited ability to do.

To run the new radar, however, Small went on, “it’s going to take roughly double the power [and] maybe a little more than double the cooling” so it doesn’t overheat. “We fit — easily might be a little overstated — but we fit within the DDG-51 footprint,” he said. The Navy is just completing a two-year study of all the modifications required.

So while Arleigh Burkes are upgraded with other new equipment all the time, AMDR cannot be affordably retrofitted to existing ships. The changes to accommodate it are so extensive that the Navy considers them a new iteration of the class, “Flight III.” The USS Murphy and the next few destroyers planned are all Flight IIAs, which have the passive SPY-1 radar as earlier Arleigh Burkes. They are distinguished by the addition of a helicopter hanger. The Navy plans to start building the AMDR-equipped Flight IIIs in FY 2016.

That’s halfway through a multi-year production contract now being competed, and changing design in mid-contract is something the independent Government Accountability Office considers a distinctly bad idea. “The Navy faces significant technical risks with its new Flight III,” GAO reported in January, and the first ship should be contracted for individually to work out the bugs. But the Navy and Congress are counting on the MYP to save enough money to buy 10 destroyers over five years instead of 9.

That’s not GAO’s only issue with Flight III. Originally the Navy wanted to install AMDR on an all-new ship, a cruiser tentatively called CG(X), but it abandoned the new design effort as too expensive. Fitting AMDR into the Arleigh Burkes, even modified ones, requires making it much smaller and thus less powerful. The Navy’s 2009 analysis justifying the downsizing “assumes a significantly reduced threat environment from other Navy analyses,” GAO wrote, and the now-shrunken radar “will be at best marginally effective.”

In general, the two captains said, the DDG-51 has adequate room to modernize and grow. The first Arleigh Burkes, for example, had three 2.5-megawatt generators; the current ships have 3.0 megawatt ones, and there are 4-megawatt models that could fit. The Navy is also looking at a “hybrid electric drive” add-on that would let the ship run entirely off the generators at low speed, instead of having to turn on the main gas-turbine engines. Those engines are replaced with the newest models whenever they wear out. And the vast majority of a modern warship’s combat power comes not from its hull and mechanical systems but from its electronics, where the rapid advances in commercial computing known as Moore’s Law allow the Navy do to more with less.

“Technology’s gotten to the point where we can pack a lot more capability into these same spaces, and we architect our systems so they’re more easily upgraded throughout their life,” said Capt. Small. For electronic warfare gear to detect enemy signals, for example, he said, “we’re looking at, in some areas, maybe 40 and 50 times improvement in sensitivity.”

With all their upgraded gear, the latest Flight IIA ships, like the Michael Murphy, displace 9,200 tons. “The ship could take 10,000 tons” without compromising stability or seaworthiness, said Vandroff. “If you want more than 10,000 tons’ worth of equipment and warfighting capability on the ship, you need a different hull.”

That was what the Navy was attempting with the cancelled CG(X) and with the DDG-1000 destroyer design, the Zumwalt class. It was not the Navy’s original plan to keep the Arleigh Burkes around for 90 years. In fact, when the Navy ordered the Michael Murphy, back in 2005, it was supposed to be the last in the Burke class. Shipbuilders Bath Iron Works (in Maine) and Huntington-Ingalls (in Mississippi) even shut down their production lines. But since then the Navy abandoned CG(X), cut the DDG-1000 class off at three ships, and restarted production on the DDG-51s.

“DDG-100 was basically a statement that we could go to a completely different hull technology because of the terrific things we could get,” making the destroyer a “stealth ship,” said naval historian Norman Friedman. “The stealth turned out to be not such a great idea and it cost a fortune.”

The truth is that “hull technology, hydrodynamics, really isn’t changing very much,” Friedman continued. “[So] they’re going to put their money into combat systems and maybe propulsion.” To borrow a concept from the CNO, he said, “if you think of this ship as a ‘truck’ you can put components in, the outside doesn’t matter much.”

Eventually, though, ships do wear out, becoming ever more expensive to maintain. Aircraft carriers routinely last 50 years, but those are huge, robust vessels that can avoid obsolescence as long as the latest aircraft can physically fit on board. The Navy historically retires destroyers and cruisers at about 30 years. Now it plans to keep its older Arleigh Burkes in service 35 years and the newer ones for 40.

“The longest I can find we have kept a warship in service since World War II [was] the nuclear cruiser Long Beach,” said naval historian Norman Polmar. “She was in service 37.9 years.” Allied nations have kept former US Navy vessels going for even longer, but they don’t sail them around the world the way we do, he said: “Our ships wear out become we run them so hard.”

“We don’t have a lot of recent experience operating destroyers into their thirties,” agreed Congressional Research Service analyst Ronald O’Rourke. “We may be in for some surprises if we do keep ships that long.”