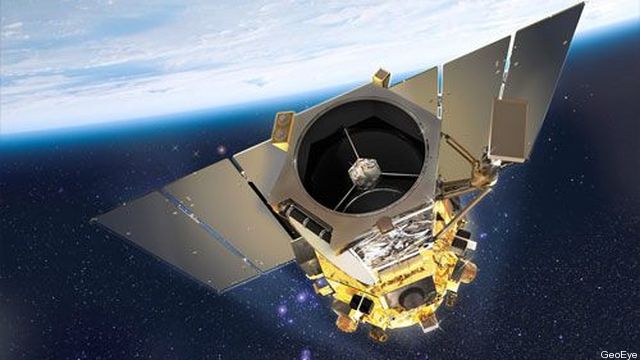 At last year’s Geoint conference, Director of National Intelligence Jim Clapper made it clear that a significant amount of the savings needed by the intelligence community over the next five years would come from cutting the budget to buy commercial space imagery. Despite opposition within the National Geospatial Intelligence Agency and quiet panic on the part of the two U.S. companies that provide that imagery — GeoEye and DigitalGlobe — Clapper was unrelenting. Quietly, the National Reconnaissance Office expressed satisfaction.

The NRO appeared to have, finally, won the argument over whether the U.S. should buy “exquisite” capabilities — very expensive spy satellites capable of capturing extraordinarily detailed images from space. In this op-ed, Robbin Laird, a member of the Breaking Defense Board of Contributors, argues the Obama administration has made a policy of abandoning public-private partnerships like the ones with GeoEye and DigitalGlobe at the cost of the taxpayer and the soldier in the field. (Watch us this week for more coverage of commercial space during Geoint 2012.) The Editor.

It seems a long time since the Clinton Administration and its commitment to working private sector relationships in defense and space to shape a new set of public-private partnerships. In many ways, the Bush Administration continued this approach and highlighted the significance of various tools to shape such approaches, such as performance based logistics contracts.

Enter the Obama Administration and its new approach. We’ve seen a gradual but clear withdrawal from public-private partnerships, which started with the administration’s assault on the F-22. Secretary Gates got his pet wish to end the production of the F-22, but the real story is even more significant. The administration got rid of the Performance Based Logistics contract (PBL) for the F-22, which has resulted in higher costs for decreased readiness. The PBL was delivering significant readiness rates and the contractor and the depots were working very efficiently and effectively.

But the administration proceeded on the grounds that, contrary to all historical evidence, the public sector would be more efficient and cost effective. The impact on the F-22 has been palpable, an even more serious concern when the administration pivots to the Pacific.

We are about to see the same thing happen to commercial space imagery. The reason the Clinton and Bush Administrations were committed to private sector space was not because of their ideological commitment, but because of a sound business strategy. If you could get the investments made by the private sector tapping into market funds to work for government-usable products, it was recognized that cost savings occurred on two grounds.

The first is clearly on capital costs.

The second is reducing the need to build, buy, and maintain government-only systems, which are inherently expensive because of the high cost of public sector operations.

But for the Obama Administration, there is a clear reversal going on. Even in the face of significant budgetary pressures and constraints, there seems to be little or no real commitment (except in words) for the public-private partnerships, which can drive economies of scale and capital investment savings.

Current, US government policies will lead one of the two major suppliers of commercial imagery to the US government to fail. A merger is in the offing but the question will still remain: what clear policies by the US government will drive the commitment of a private sector company to invest in new systems and share the benefits of the resultant product with the government?

The administration clearly has to demonstrate where the public sector funding will come from to replace the money lost from squandering public-private sector opportunities. It is about opportunity costs, not just fiscal year expenditure costs.

What we have is the perfect storm: an administration far from the Clinton days of commitments to public private partnerships combined with the historical proclivity of the US intelligence community to prefer government subsidies to keep their hegemonic approach alive.

Not only is this not necessary, it is time to put together a policy change in which I can believe in. This would be a return to a serious commitment to public-private partnerships and to reducing the heavy hand of government oversight which favors process over results.

Robbin Laird, a member of the Breaking Defense Board of Contributors, is an international defense consultant, owner of the Second Line of Defense website, and a former National Security Council staffer.