Navy Buys Lots More Fighters; Ships Up Slightly But 355 Not In Sight 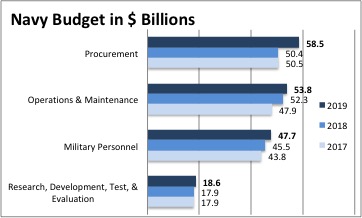 PENTAGON: The U.S. Navy’s budget is growing by over $12 billion in 2019, and more ships are on their way – but not enough to get to the hoped-for 355-ship fleet any time before the 2050s. In unveiling its $194.1 billion budget for the 2019 fiscal year on Monday, Navy officials highlighted the increase in research & development and operations & maintenance budgets, and the continued movement in the Ford-class carrier and Columbia-class submarine.

At the same time the service quietly acknowledged that it wouldn’t reach 355 ships for more than 30 years, taking a steady-as-she-goes approach to a plan that was loudly endorsed by then-candidate Trump on the campaign trail in 2016 and President Trump has reiterated.

In fact, the biggest percentage increase in Navy procurement came not in ships, but in  planes. The 2019 budget asks for 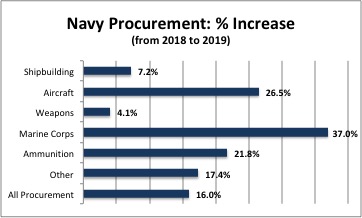 The service is asking for $21.9 billion to build a total of 10 ships, just $1.5 billion and one ship more what it had requested in 2018. Those hulls include

The Navy plans to buy six of the new frigates into the five-year budget plan that stretches to 2023. The service has scrapped the idea of refitting retired Perry-class frigates to quickly get more ships in the water to boost presence.

Overall, over the next five years, the service plans to add 54 new ships in the fleet, bringing the total of 326. Many of these hulls, however, were already in the works under current budget plans, and this plan still doesn’t get anywhere near the 355-ship fleet the Navy says it needs. 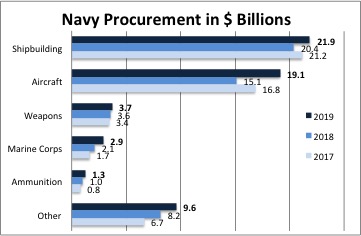 Despite some high-level interest, there is no hint of the 355-ship plan in the new budget. One of its chief proponents, Jerry Hendrix, a former naval officer now with the Center for a New American Security, told me he was disappointed by that, as well as the slow planned procurement of the new frigates.

“The Navy seems intent on focusing on high capability, high cost” Arleigh Burke-class destroyers, building an average of three of year at $2 billion per ship, compared to FFG(X) ships at no more than $850 million per ship, he pointed out. “Overall, this plan does not achieve the balance between capabilities (i.e. quality) and capacity (i.e. quantity) that was defined within the President’s National Security Strategy. A slightly more balanced approach could reach the President’s goal of a 355 ship Navy more quickly.”

Part of the quality-over-quantity approach is that the Navy plans to make the most of its existing ships through upgrades and, especially, buying more munitions to put on them:

In the $18.4 billion R&D account – up from $17.7 billion in 2018 – the Navy will spend $705 million on the Columbia-class submarine and $135 billion on the Navy’s future frigate, which includes a “reassessment” of the capabilities needed. What this means is vague but the Navy has repeatedly rethought its smaller-than-destroyer warships since the Littoral Combat Ship kicked off in 2003.

Sydney Freedberg contributed to this story