AF Budget: JSTARS Recap Finally Killed; B1, B-2 Bombers Will Be Too

PENTAGON: The Air Force was eclipsed as the biggest budget winner this year, partially because of its decision to begin shifting from current weapons to new ones.

The Army, which has greatly increased its commitment to land weapons, increased 14.9 percent and the Air Force is up 14.1 percent. Meanwhile the Navy Department — which includes the Marine Corps — lags slightly (at a still respectable 12.1 percent). By contrast, defense-wide agencies, which like personnel have consumed an ever-larger share of the budget over the years, increase by only 5 percent. 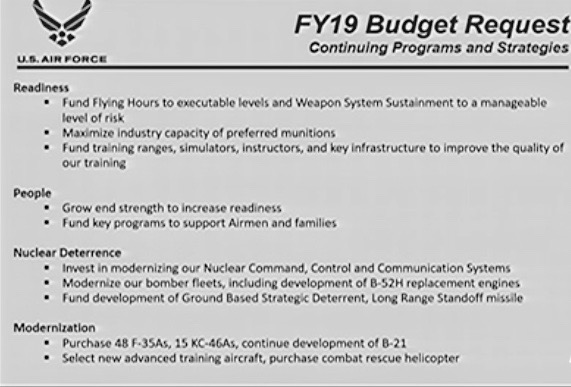 One key example of the Air Force shifting from current weapons to new ones is its handling the bomber fleet. The budget includes development of replacement engines for B-52s, which will be crucial over the next decade as the B-21 bomber begins to get deployed. Part of that calculus includes retiring the B-1 and B-2, which will be modified to keep them “relevant,” Air Force Secretary Heather Wilson.

There were no timelines in the budget, but in an official story posted today, the Air Force said the B-1s and B-2s “will be incrementally retired” as B-21s come online.

Why keep the magnificent but old B-52s as a bulwark of the bomber force? “The decision to maintain the B-52 is based on numerous factors including maintenance and sustainment metrics, such as aircraft availability, mission capability, supply, maintenance hours per flying hour and total cost perspectives,” the Air Force story says.

If you wanted some indication of just how fundamental the Air Force knows space warfighting is, the request includes a one-third increase in Research, Development, Test and Experimentation for Air Force space, which an official story describes as “a substantial increase to meet the threat from China and Russia.” We’ll have to dig up details as more information becomes available.

While JSTARS will keep flying to the mid-2020s, this aircraft is going the same way as the Airborne Laser — retirement. It’s just too easy a target with too few defenses. The service had planned to buy 17 JSTARS recap planes. Boeing, Lockheed Martin and Northrop Grumman were all competing for the contract. The new battle management system will be comprised of a range of sensors, Pletcher said. It wasn’t clear to me if there would be an airborne focus for the sensors or whether it would truly pull together data from ground, sea, air and space sensors to build a fuller picture than could be had from a single aircraft.

Among the most interesting tidbits (of which there were not many in the Air Force briefing) was mention by Maj. Gen. John Pletcher, deputy assistant Air Force Secretary for budget, of a “steerable” and jam-resistant GPS constellation. Now we all knew GPS 3 and its ground station, OCX, will be jamming- and cyber-resistant, but steerable is interesting. That term seems to imply those satellites could really scoot around, instead of going into space with very small amounts of fuel that allow them to reposition a bit in the event of a possible collision.

In other bits and bobs, the request includes a healthy $500 million to finish an Analysis of Alternatives on Penetrating Counter Air, the Next Generation Air Dominance (NGAD). The briefers were willfully vague on what NGAD would actually be, saying all that was up to the AOA. 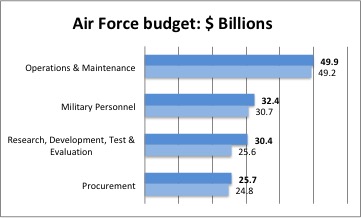 Even with the $26 billion increase in the 2018 budget and the $54 billion over the spending caps for 2018 and 2019 approved last week by Congress, the Air Force and the Pentagon still don’t have enough money to do all they want. Proof? And we are finally seeing the Air Force, which hadn’t been able to afford adding substantially more F-35As in the recent past, now being forced to choose between more F-35s and more of other weapons.

“It’s really about balance,” Pletcher said during the Q and A. “If we do more F-35s, now then we’d have to trade things off, and we’d have to mod them later.” Those can’t be words Lockheed wants to hear.

Why do they have to make those choices? The Air Force is also buying the KC-46, the B-21, Air Force One replacement and a broad range of space capabilities.

“The bow wave we’re talking about is significant. It’s probably about a 10-year bow wave,” Fletcher said. And how much money’s in that bow wave? About $33 billion.