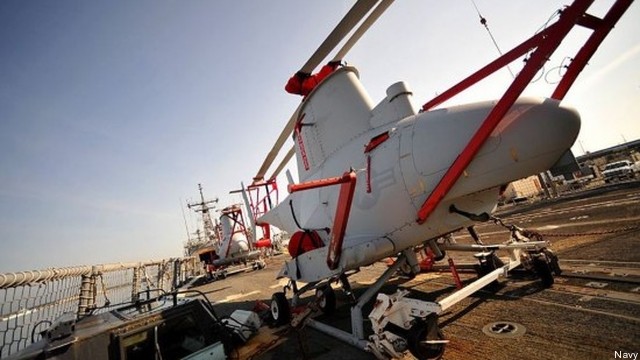 WASHINGTON: Things could get a lot busier for the Navy’s fleet of Fire Scout drones with the service’s decision to drop plans for a new, medium-range unmanned aircraft.

The larger C model version of the MQ-8 Fire Scout might fill some of the requirements left unfilled by the Navy’s decision to cancel the Medium-Range Maritime Unmanned Aerial System program earlier this year. The Navy stands to save $200 million in fiscal 2013 and $1.3 billion over the next five years as a result of the MRMUAS cancellation, Naval Air Systems Command spokeswoman Jamie Cosgrove said in an email.

The MRMUAS was an intelligence, surveillance and reconnaissance helicopter drone, designed to support Navy and special operations forces. It would have had a longer range and carried larger intel payloads compared to the Fire Scout. But, due in part to the “demonstrated in-theater capability of the MQ-8B Fire Scout aircraft and follow on MQ-8C capability upgrade,” Navy leaders decided to nix the MRMUAS, Cosgrove said. Congressional appropriators set aside $191 million for the Navy to buy 12 new C model Fire Scouts in the omnibus spending legislation passed by the Hill last December. The Navy and Fire Scout prime contractor Northrop Grumman are hammering out the details on a deal to build the new C model Fire Scouts, which could be locked in as soon as March, a company official told Breaking Defense last month.

However, Cosgrove was adamant that any version of the Fire Scout would not fill the slate of requirements Navy leaders had planned for the new helo drone.

“The underlying requirements for MRMUAS still exist, particularly in the areas of maritime and ship-based ISR support to special operation forces. These requirements are not fulfilled by current or nearly fielded unmanned systems,” including the MQ-8, she said. However, the Fire Scout does “cover a portion of the MRMUAS requirement” and could serve as an “interim solution until a final medium range UAS solution could be developed and fielded.”

That said, the Navy will finish up an ongoing Analysis of Alternatives for MRMUAS “to inform Navy and Army leadership on capabilities available” to meet the medium-range aerial drone mission, Cosgrove said. But that is where the work will end. “After considerable deliberation and weighing these broader benefits against fiscal constraints, the Navy has decided to fund completion of the Analysis of Alternatives but will not go forward with [a contract] award,” according to a separate NAVAIR statement sent to industry competitors. “The decision not to award the [broad agency announcement] study contracts is driven solely by budgetary constraints.” Along with the C model Fire Scout, Boeing’s A160 Hummingbird and Lockheed Martin’s K-MAX rotary-wing unmanned drones were widely considered to be top candidates for the MRMUAS program.