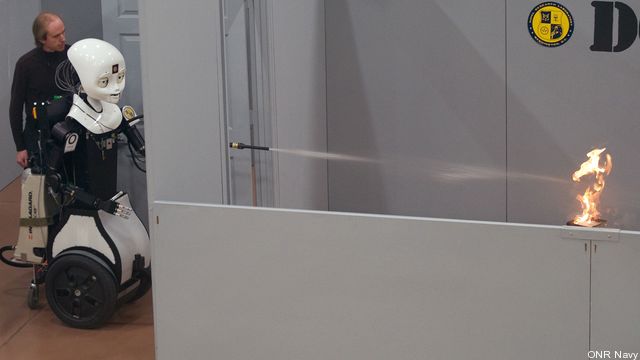 WASHINGTON: I walked past a sandy desert, a littoral waterway and a steamy jungle and watched a human-like robot extinguish a shipboard fire, all in about an hour and without leaving town.

It was possible because the Navy has opened a new Laboratory for Autonomous Systems Research (LASR) on the grounds of the Naval Research Laboratory, just across the Anacostia River from downtown.

“This really is a one-of-a-kind laboratory that we expect will provide future sailors and Marines with better tools to do their jobs,” Rear Adm. Matthew Klunder, chief of Naval Research, told reporters after the tour of LASR. “Under this one roof are all the environments our sailors and Marines could face,” Klunder said.

Klunder noted that the improved autonomous systems that will come out of the new facility fit nicely with the new national strategic directive that focuses the U.S. military’s efforts on the Asia-Pacific region and the “anti-access, area-denial threat.”

Although the admiral did not say it, that A2AD threat is poised primarily by China, although Iran is attempting to achieve similar capabilities in the Persian Gulf.

The 50,000 square foot facility cost about $17.7 million. But Klunder and the scientists who briefed reporters on their work all emphasized that LASR will allow them to conduct more extensive tests of prototype systems and concepts in the same building in which they develop them, reducing the need for expensive and time-consuming trips to test ranges around the country.

“This building will save the military a lot of money and we will be able to complete testing a lot faster,” said Glenn Henshaw, one of the seven PhDs who showed off their work.

The LASR team also showed off Lucas, a six-foot tall robot with an expressive face that responded with clear distress when he received conflicting instructions in a shipboard fire-fighting situation. Then Lucas brightened when the instructions were corrected and recommended the proper equipment to fight the fire.
Lucas’ partner, Octavia, then demonstrated the ability to follow oral commands and hand signals to find and extinguish a fire in a simulated shipboard space.
While neither of the robots had the capabilities of Star War’s C3P0, their ability to interact with their controllers in a human-like way, to recall and to act on information received earlier was impressive. And, the idea of a thinking robot that could deal with a dangerous fire in a closed shipboard room, where the smoke and heat can quickly incapacitate a human, was very appealing to this former Navy officer.

Henshaw, who calls himself a “space autonomist,” is working on a DARPA-funded program to develop a robotic space craft that could refuel, repair or upgrade satellites while in orbit, greatly prolonging their useful lives and reducing the need to build and launch new systems, which cost hundreds of millions of dollars.

The tour included a desert, where Greg Scott, a spacecraft control systems scientist, demonstrated a robotic arm that searched for simulated IEDs in the sand. He also pointed to a model of a three-armed space craft that was an early prototype for the space handyman that he and Henshaw were helping to develop.

Next was the littoral bay, which included a large pool in which scientists can produce waves and a sandy or rocky ocean floor to duplicate the surf zone to test autonomous underwater vehicles. The surf zone remains one of the most difficult challenges for Navy mine countermeasure forces and a potential threat to Marine amphibious operations.

Jason Geder, a computational physics and fluid dynamics expert, showed us a two-foot long device that used flexible fins, like a fish, for propulsion, and could be used to scout for mines in the surf zone.

Next to him was Lenny Tender, a specialist in biomolecular science, who was working with a large vat of grimy water to test devices that can draw energy from the chemical properties in sea water and the ocean bottom to power autonomous systems. That would eliminate the need for batteries and could allow nearly unlimited operating time for underwater sensors.

Tender noted that he was able to get water for his projects from the Blue Plains sewage treatment plant, which is right next door to NRL.

We also saw a large room in which the engineers and scientists were working on an unmanned aerial vehicle (UAV) that used bat-like sensors to avoid hitting the walls, a much smaller UAV that was “printed” by laser from thin foam and could be created in 90 seconds for next to nothing, in contrast to the much more complex, and much more expensive UAVs built to carry heavy sensors and weapons. They also had a concept device that looked like a computer mouse, but had been converted into a UAV.

The mouse UAV, for example, could fly in through an open window and, by hiding its wings, could monitor activities in the room without attracting attention, aerospace engineer Dan Edwards explained.

That was part of a broader “hide in plain sight” program to develop sensors that could be put in place without any enemy — or innocent locals — noticing.