WASHINGTON: The Navy is finally getting the funding it has sought to push production of its next-generation Columbia-class ballistic missile submarine. But in a move that has raised some eyebrows, hundreds of millions of dollars for the program are not coming from the Navy budget, a situation that could become the new normal amid continuing budget uncertainty.

Navy leadership has said the Columbia program, which will include 12 nuclear-powered boats to replace the aging Ohio-class SSBNs currently in service, is one of their top priorities to stay ahead of Russian and Chinese sub-building booms, and grow the overall attack sub fleet from the current 52 to 66 by the 2040s.

But money is a major problem. With a host of expensive of modernization priorities like building multiple attacks submarines per year, getting the first four Ford-class carriers out of the shipyards, and buying more F-35s, the Navy is looking for help.

These programs are coming online under the shadow of the return of budget caps in 2020, which will force the service to make hard choices while bracing for future shipbuilding budgets that are likely to require more money than is currently planned.

In 2015, Congress was convinced to take the novel step of creating the National Sea-Based Deterrence Fund, establishing a pot of money controlled by the Secretary of Defense — and outside of the Navy’s budget — to help fund the Columbia program.

Over the past six months, the Pentagon has poured $831 million into that pot, with $231 million allocated just last month by Pentagon Comptroller David Norquist.

The money was approved by Congress in the March Omnibus which funded the Defense Department. It comes on top of the $3 billion requested in 2019 for initial Columbia procurement, along with $1.7 billion for nuclear propulsion components for the lead ship, and another $705 million for further research and development.

While some critics say the fund allows the Navy to skirt fiscal accountability by being able to reach into a separate account to help fund its boomers, the 2015 rule was the result of decades of work by the Navy and some lawmakers to convince Congress that the SSBNs are more like the nation’s ballistic missile defenses, and should be funded — at least in part — from a national account.

That argument received some backup in February in the Pentagon’s Nuclear Posture Review, which said the SSBN’s are a critical part of the U.S. strategic nuclear deterrent force, known as the triad, which also includes land-based Intercontinental Ballistic Missiles (ICBMs) and long-range bombers like the B-2 and B-52. The report said the submarines are “the most survivable leg of the triad. When on patrol, SSBNs are, at present, virtually undetectable, and there are no known, near-term credible threats to the survivability of the SSBN force.”

If the boats are so important, however, the Navy should find a way to pay for it under normal budgetary processes, says Mackenzie Eaglen of the American Enterprise Institute. Mackenzie, a member of the Breaking Defense Board of Contributors, wrote recently that once budgets flatline in 2020 with the return of sequestration, “this arrangement would preclude the hard choices planners will need to make about the future by rendering large components of the Navy shipbuilding budget politically untouchable under the remit of a fund supposedly of national importance.”

Eaglen told me that the fund is little more than “a shell game to move around money. It means that another program loses. Sometimes it is not a big deal, but other times it is.”

Rep. Rob Wittman, chairman of the HASC seapower subcommittee, disagrees. In an email, he told me that “the Congressional Budget Office assessed that the use of the Fund will save several hundred million dollars per ship. As the second largest Department of Defense procurement, it is essential that this program remain within cost and on schedule.” The recent transfer of the $231 million “is another positive step to provide strategic deterrence in support of our nation’s defense.”

The bill for the new Columbia boomers will be huge. The Navy estimated last year that the lead ship (almost the most expensive) would cost roughly $8.2 billion, while additional ships would cost around $7.2 billion per hull. That would take a huge chunk out of the Navy’s yearly shipbuilding budget, which this year hit a high of $21 billion but is likely to flatline should sequestration caps come back in force in 2020. 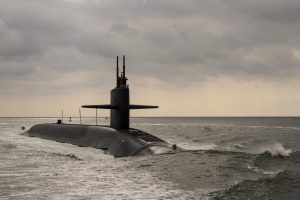 The deterrence fund, however, according to the the 2015 legislation that created it, is intended to create opportunities for the Navy to save on some of the common components shared between the Columbia program, the Virginia-class attack submarine and the Gerald R. Ford-class aircraft carrier. There might also be some cost savings to be had stemming from the assistance the US. is providing the U.K. on its  Dreadnought SSBN program. The new boats will make use of the modular Common Missile Compartment, and the United States is also helping with the new PWR-3 reactor plant to be used by the Dreadnought.

In general, criticism of the fund has been muted for the moment.

“It looks like most, if not everyone, involved accept that this is how we will do business for the Columbia program,” said one official involved in defense budget issues, who requested anonymity. “I can’t see it has hurt any other program.” Since shipbuilding has been enjoying substantial increases in the president’s request and Congress has been eager to add even more money to shipbuilding accounts, “we haven’t gotten to the period where some of the authorities in that fund—cross class purchases of materials, for example—is being extensively used, if at all yet.  It has allowed the Navy to more easily cash flow the items it is purchasing, so that makes the Columbia’s program a little easier to manage,” the official added.

More money can float a lot of boats. The test will come when some of that money dries up, and the other services begin clamoring for their own deterrence funds to buy programs they can’t afford, or won’t budget for.