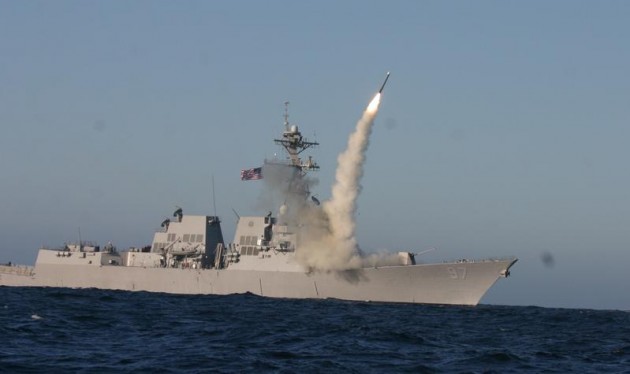 WASHINGTON: If “this potential operation” against Syria continues into October, when the new fiscal year begins, the Navy’s going to need more money. That, in turn, means Congress has to act. Ideally, legislators would pass a supplemental spending bill, Chief of Naval Operations, Adm. Jonathan Greenert said this morning. Failing a supplemental, though, Greenert said Congress would at least have to give the Navy “reprogramming authority” to fund combat operations by raiding other accounts, at the expense of other priorities.

“A supplemental might be the order of the day… as we work through how long operations are going to be,” Adm. Greenert told the audience at the American Enterprise Institute this morning.

It took 21 minutes into Greenert’s appearance for anyone to use Washington’s new s-word. and it was host John Kyl, former Republican senator, who first mentioned “Syria,” not Greenert. The admiral had carefully avoided the word in his opening remarks, although he alluded to “Mideast operations” in general terms, and instead focused on his familiar themes: the continued rebalancing to the Pacific, peaceful outreach to the Chinese, progress combating sexual assault, and the impacts of the automatic budget cuts known as sequestration.

Kyl made sure to link the costs of a Syria operation to the sequester. Kyl has been a bitter critic of fellow Republicans who want deficit reduction even at the price of a strong defense. “Fortunately,” Kyl told reporters after the event, “I don’t think that represents the majority of members of the Republican party, but there is a group that has reversed that priority.”

So what would be the costs of a Syria operation? It’s a “nagging” problem, not an “extraordinary” one, Greenert told the group when I asked him to elaborate.

So far, the Navy hasn’t “surged” any ships from US ports, said Greenert. Most of the ships that would launch a strike — the carrier USS Truman and its escorts in the Gulf of Oman, three destroyers and a cruiser in the Eastern Mediterranean — were already in the region on regularly scheduled deployments and “already budgeted to be over there.” But the Pentagon has already ordered the USS Nimitz and its escorts to stay in the region instead of coming home as planned. Every additional week the Nimitz strike group spends at sea, he said, costs an additional $25 million.

When and if the shooting starts, the cost of all-out combat operations would add another unbudgeted $30 million a week — half for the Nimitz carrier strike group, half for the second carrier, Truman. (The Navy used to keep two carriers on station in the Middle East at all times, but sequestration and other budget problems forced them to cut back to one, which is why having two hang around now costs more than was budgeted even if no one ever engages in combat). As for surface ships and submarines, each Tomahawk cruise missile they fire would cost $1 million to replace.

“For the remainder of the weeks in September, we’re comfortable that we could accommodate the kind of operations that would occur there,” he said. “If you start running into [fiscal year] ’14, there a number of mechanisms, Sydney. One is a a supplemental. Another is we would ask for a ‘forward apportionment’ of money,” essentially “borrowing from our own budget” by moving funds scheduled for the last quarter of fiscal 2014 into the first, then reprogramming mid-year to pay themselves back.

Finally, regardless of Syria, Greenert has repeatedly said the Navy would need broad reprogramming authority to deal with sequestration, which blindly cuts an equal percentage from every non-exempt account in the budget. Syria just makes that general reprogramming more urgent, he said today.

“We need about a billion dollars [more for] the operations and maintenance account and about a billion dollars for the procurement accounts, [mostly for] shipbuilding, which will be my number-one priority.” But at the very least, the admiral begged Congress, if the Navy does have to pay for strikes on Syria, “give me an opportunity to take it from an investment account into the operating account.”

So whIch programs might pay the price of sequestration and Syria? Adm. Greenert, a submariner himself, was emphatic about protecting the nuclear-armed sub force and high-tech R&D projects, but much softer on the size of the carrier fleet.

The Navy absolutely must “make sure we maintain a credible and modern sea-based strategic deterrent,” Greenert said. “That’s my number-one program” — or rather, programs: The Navy must maintain and modernize the current Ohio-class submarines and their Trident ballistic missiles at the same time as it develops the (alarmingly expensive) replacement sub, the SSBN(X), the CNO made clear.

Laser weapons, railguns, unmanned systems, and electronic/cyber warfare are also all high priorities, Greenert said. But the admiral only mentioned the size of the aircraft carrier fleet when specifically asked about it, and there he signaled real willingness to sacrifice numbers to preserve readiness:

“I would like to have 11. That remains our requirement,” Greenert said, “but when you look at the limited fiscal resources, you have to look at it in a balance. What kind of force structure can you afford to sustain?”

“I’m about having the right number that I can organize and train and equip and keep ready,” Greenert continued. “Mistakes have been made in the past where you say, ‘well, I’ll just hold on to the force structure and we’ll recover'” on readiness when a crisis erupts. (The Korean War comes painfully to mind). The current consensus (though it’s starting to erode) is that approach doesn’t work: Keeping up the size of the force at the expense of keeping it ready creates a “hollow military.”

“We have to be able to respond wherever it matters,” insisted Greenert: to Syria, to an Iranian threat to cut off Gulf oil shipments through the Strait of Hormuz, to a North Korean threat to launch long-range missiles, to a tsunami in Taiwan or an earthquake in Haiti. Each operation on its own may be relatively modest, but they add up, and you never know where the next one is going to be.

“We have to have a Navy that is out and about [around the globe], able to respond like we’ve done here… able to respond in days,” he said. “If we have to wait back back home and have to steam over there, it’s a two or three-week operation.”

As hard as Greenert tried to tie the current crisis in Syria to the long-term issue of adequately funding the fleet, however, he has a tough audience on Capitol Hill, as Kyl told reporters after Greenert departed.

“It is up to leaders, like my former colleague Sen. McCain and others, who appreciate the relationship between congressional action which cuts the budget to begin with — and then sequestration cuts it even more — and our ability to engage in operations like this and still have a presence in other parts of the world,” Kyl said. “It’s up to them to convince their colleagues of the folly of these cuts and I know he’s trying very , very hard to do that but these days it’s not an easy task.”

“There’s a phenomenon in the last two or three years that’s primarily driven by budget considerations that has caused some Republicans that in the past I think would have been more inclined to support the military to create a higher priority for deficit reduction even if it means reductions in military spending,” Kyl continued. “Fortunately, I don’t think that represents the majority.”

Very soon, we may get a chance to see if Kyl’s optimistic estimate is correct.