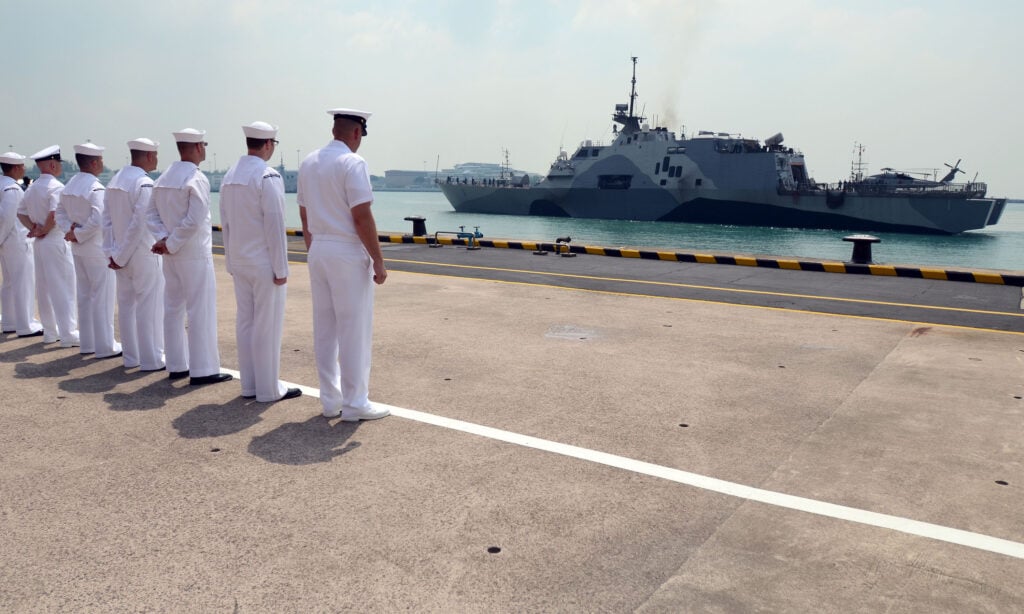 CAPITOL HILL: Navy Secretary Ray Mabus talked up the controversial Littoral Combat Ship days before departing for Asia to visit the first LCS, USS Freedom, which recently arrived in Singapore (sporting a sniffy camo paint job). Freedom has been bedeviled by cost overruns, delays, and manufacturing defects, with a new problem, seawater contamination in lubricant fluid, arising on its trans-Pacific trip. But the bigger picture Mabus said, is how this new class of small and nimble ship will cooperate with foreign partners to keep the peace in the volatile South China Sea and the strategic Strait of Malacca.

“Freedom is the first of its class, and it was built as an experimental ship, and every first of the class has some issues,” Mabus said of the seawater contamination, speaking to reporters after a Friday speech on energy security hosted by the Truman National Security Project. “One of the reasons we sent Freedom forward on deployment was to see what those issues were.”

After the agonies over Freedom and, to a lesser extent, its very dissimilar sister ship, USS Independence, Navy largely rebooted the program. Costs are coming down, the first ships’ defects are being remedied in follow-on vessels, and Mabus recently boasted that the Littoral Combat Ship is “one of our best programs” — although the jury is still out on LCS’s ability to survive in all-out combat.

“We’re going to deploy — forward deploy — four of these ships by 2016 to Singapore,” Mabus said confidently. Operating out of a foreign port this way, close to the operations zone, cuts out the long sea journey from North America and lets one ship do the patrol work of four US-based ones. (The Navy’s also moving four of its Aegis destroyers to Rota, Spain to better protect Europe against Iranian missiles). The Navy will even keep Freedom in Singapore after the current crew’s tour of duty is done, flying them home and flying in a complete replacement crew.

Mabus himself his flying out to Singapore Tuesday. (“The CNO [Chief of Naval Operations Adm. Jonathan Greenert] is following me by about a week,” the Secretary said). “The purpose of my trip is, No. 1, to welcome Freedom but, No. 2, is to talk about how we’re going to be using these ships with our partners.”

Economically prosperous, ethnically 75 percent Chinese, and not particularly democratic, Singapore occupies a strategic location along one of the world’s busiest corridors for seaborne trade. Politically, the city-state has long walked a delicate line between the US and China, and even now it is hosting US warships for months at a time and, eventually, in regular rotation, it emphasizes the US presence is a “deployment,” not a “base.”

Whatever it’s called, from Singapore’s harbor, the Littoral Combat Ships can head west towards the Strait of Malacca, through which forty percent of the world’s oil passes en route to East Asia. Or the LCSs can turn east into the South China Sea, whose barren islets and prospective riches of natural gas are bitterly disputed between China, the Philippines, and Vietnam. Singapore is one of the few countries in the region to keep almost entirely out of the territorial quarrels, another strategic advantage as a US partner.

“Over the decades, the American Navy and the American presence there has been one of the great stabilizing influences” in the Western Pacific, Mabus said. “We don’t take sides in territorial or other sorts of disputes,” he emphasized, repeating the administration’s deep reluctance to be drawn into what is a highly emotional conflict for the increasingly assertive Chinese. “But what we do offer is presence,” he said. “What we do offer is the notion that the seas should be open and free for all.” (Mabus even put in a plug for the controversial Law of the Sea treaty, which the administration has largely given up on getting ratified).

In this region, and in context of the administration’s January 2012 defense strategic guidance, “what the LCS can do [is] to build partnership capacity,” Mabus said, “operating with the Singaporean Navy but also the navies of the region, to become more interoperable, to understand each other, to have experience in exercises and in operations which will be invaluable not only to us but to the countries in the region.”

Littoral Combat Ships are significantly smaller, less well-armed, and less resistant to battle damage than the Navy’s workhorse DDG-51 Arleigh Burke destroyers. But precisely for that reason, they’re less intimidating to partners whose navies often resemble the US Coast Guard more than the US Navy’s ocean-going battle fleet. The ship also has a significantly shallower draft than full-size warships, giving it better access to coastal waters like those of the congested Strait of Malacca. And if LCS were to show up in one of China’s mid-sea standoffs, it will still loom large compared to the lightly armed or entirely unarmed civilian maritime patrol vessels the Chinese usually (thought not always) dispatch instead of more escalatory warships.

Stability in the South China Sea is essential because, with all the turmoil in the Middle East, the last thing the planet needs is a crisis at the Pacific end of the great Gulf-to-Asia oil trade that drives half of the world’s economy. “Even in peacetime,” Mabus said in his formal remarks, a threat from an “unstable regime” (i.e. Iran) can send oil prices spiking.

“I use the term unstable regime because my public affairs officer, [Captain] Pamela Kunze, told me I had to quit using the word ‘yahoo,'” Mabus let slip, pointing out Capt. Kunze in the front row, and then went on, “the threat of some yahoo” — he had to pause a moment to let the laughter die down — “may drive prices up.”

Mabus may not have been particularly diplomatic, but the servicemen and women about the Singapore-stationed warships will need to be. Said the Secretary, “they have to be great warriors — but they also have to be great diplomats.”