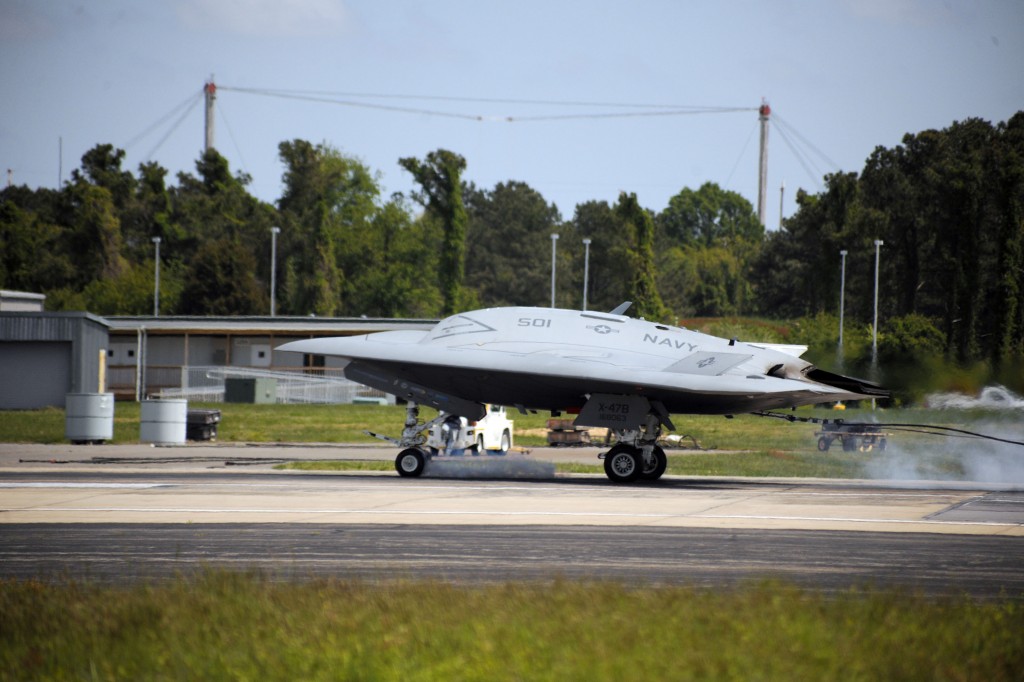 90 years ago, in the fall of 1922, US Navy pilots made the first landings on America’s first-ever aircraft carrier. (Okay, the British did it first). Just a few weeks from now, a Navy aircraft will make history again — except this time there won’t be a pilot. Meet the Navy’s new robotic Top Gun, the X-47B:

The Northrop Grumman-built X-47B, aka the UCAS (unmanned combat air system), is getting ready to be the first robotic aircraft, aka UAV (unmanned air vehicle) to take off and land on an aircraft carrier. On Friday, as the video shows, it took another big step forward by making its first landing using what the Navy calls “arresting gear,” the complex system of cables, brakes, and shock absorbers built into a carrier deck — or, in this case, a test facility on land at Naval Air Station Patuxent River — that Navy pilots use to bring their aircraft to a screeching halt before they run right off the back end of the carrier’s flight deck and fall into the water. For humans, learning to land on a carrier and snag the arresting gear wire is one of the most demanding feats possible, with stress levels in some cases going higher than in actual combat. Teaching a robot how to do it is a historic achievement. But of course the real test will come on the actual aircraft carrier.

The Navy actually put an X-47B aboard a carrier, the USS Truman, this past December, but that was just to teach the robot’s ability to navigate the complex, congested traffic of a carrier deck without running into anything. The big day will come later this month when it actually lands on a carrier. ” “When that happens, people will say ‘wow,'” Adm. Jonathan Greenert, the Chief of Naval Operations, told me recently. “There’ll be a lot of pictures, and I think that will start a discussion.”

From Greenert’s perspective, the value of the X-47B isn’t just that it’s cool technology. It’s a proto-prototype for a larger, heavily armed drone called the UCLASS (Unmanned Carrier-Launched Airborne Surveillance and Strike System) that will provide a long-range bomber capability that carrier-based aircraft currently flying, like the F/A-18E/F and F-35C, do not have. (The Navy plans to release a formal UCLASS Request For Proposals to defense companies this summer). That range, in turn, is a crucial component of future “AirSea Battle” tactics against high-tech foes like, for example, China. So while the drone may be gee-whiz now, it is the forerunner of something deadly serious.