Navy Struggles To Keep Ships Up To Snuff 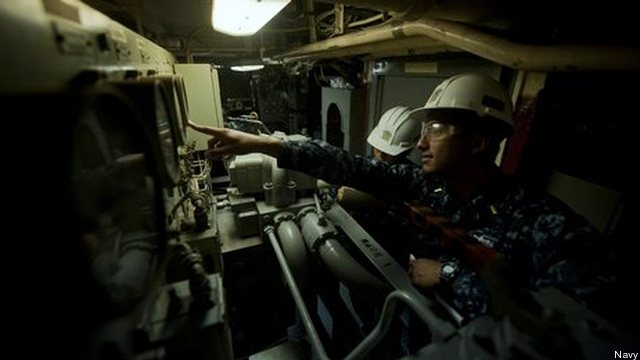 WASHINGTON: With the Navy’s fleet set to shrink over the next decade, service leaders are pushing hard to keep what ships they have left combat ready.

With the sea service to take on the large share of the Pentagon’s Western Pacific strategy, the Navy is looking to push every ready hull out to sea. But abysmal readiness rates for Navy warships have left service leaders scrambling for answers at this year’s Surface Navy Association’s annual symposium.

Much of the chatter, public or otherwise, at the symposium centered on how to keep the service’s aging warships viable in a increasingly tough budget environment. Buzzwords like “total cost management” and ship “commonality” dominated many of the speeches given by top service brass this week, especially in terms of service shipbuilding.

Vice Adm. Richard Hunt, commander of naval surface forces, said his office was spearheading an effort to putting the “rigor” back into ship inspections. Navy inspectors are going deeper into the service’s fleet to make sure each weld and screw is up to snuff. He also preached on the need for more active management of ship maintenance costs. That way Navy maintainers will be pushed to make the little modifications and fixes “that make a long-term difference” in how long a vessel can be out to sea.

Vice Chief of Naval Operations Adm. Mark Ferguson used the conference to roll out a new plan on how the Navy buys and maintains its warships and weapons. The new plan gives the Navy’s warfighting directorates will get more control over what, if any, future platforms they buy. As part of that plan, directorate chiefs will be forced to consider everything from initial procurement costs to training and long-term sustainment for each new acquisition program.

One key element of this plan is to try and get material costs down on new programs, defense industry analysts at Capital Alpha Partners said in a recent report on the SNA conference. “Direct labor accounts for about 25% of surface combatant and overhead a bit more. This focus on material cost reduction is one reason why the Navy has been so interested in block buys of ship types.”

What little discussion there was about new programs was focused on long-term efforts that wouldn’t hit the fleet until decades down the road. These discussions were “more like exploration of how ships are used or deployed as opposed to interest in brand new technology,” Capital Alpha Partner analysts point out. But with the current fleet looking like it could be the smallest since World War I, it wasn’t difficult to see why the Navy was so focused on maintaining the current fleet. But U.S naval power won’t necessarily hang on the size of the fleet, one top service leader said.

The capabilities built into the current generation of U.S. warships are years ahead of anything the Navy has fielded in the past 30 years, Navy Undersecretary Bob Work said. Even as service leaders consider changing the Navy’s long-standing goal of 313 ships, that capability will ensure America’s dominance on the open seas. “The numbers don’t [matter],” Work said.