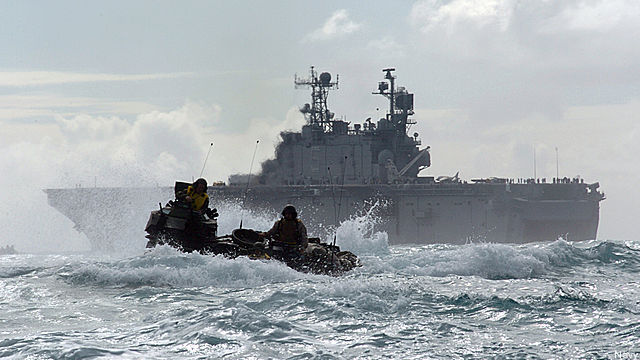 THE PENTAGON: If there was one big takeaway from the Defense Department’s fiscal 2013 budget rollout yesterday, it was this: being forced to do more with less means having to take some risks. And the Navy has decided to is risk its future amphibious capabilities to cope with the fiscal realities inside the Pentagon.

Navy leaders opted to cap its fleet of amphibious warships at 30 as part of the $13.7 billion set aside for new ships in the service’s fiscal ’13 budget blueprint. That figure is over $1.6 billion less than what the sea service spent on shipbuilding in fiscal ’12. The shrinking shipbuilding account falls in line with the across-the-board cuts built into the Navy’s overall $155.9 billion request for fiscal ’13. In terms of actual hulls cut, the Navy slashed 16 ships from its fiscal ’13 proposal, Rear Adm. Joseph Mulloy, deputy assistant secretary for budget, told reporters here.
The majority of those cuts consisted of the Joint High Speed Vessel along with a number of support ships, he said. Over the long-term, the Navy plans to hit a total force of 285 ships by 2017, going up to 300 by 2020. But those figures fall short of the service’s long-standing goal of a 313-ship fleet. Part of that drop will include a much smaller amphibious force.

“We need 32, 33 ships, but our goal is 30 right now. That’s what we’re going to have. . . you’re asking where am I taking risk? This is one area,” Mulloy said. “You can’t [cut] $58 billion and not take some risk,” he added, noting the Navy’s $58 billion cost-cutting goal set by the White House earlier this year. Marine Corps and Navy leaders have wrangled over what the right level of amphib ships should be to help the Corps return to the sea. The amphibious fleet, or “Gator Navy” as its known inside the service, is key to the Marine Corps’ overarching strategy to bring their forces back to the shoreline. To do that, the Navy and Marines’ have said they need 38 amphibious ships. But budget pressures forced the services to drop that number down to 33 ships. That number was a tough pill to swallow for the Corps, but they took their medicine. Even then, top Marine Corps leaders were already eyeing drastic measures to compensate for dropping below the 38-ship mark. But yesterday’s plan to cap the fleet at 30 ships will give the Marines what they need, when they need it, Mulloy said.

The 30 amphibs will be enough to fill the 10 amphibious readiness groups and “we’ll be able to maintain the presence to move the [Marine Expeditionary Units] we have,” Mulloy said. Even though the fleet is capped, the sea service will focus on maintaining its large-deck amphibs — like the Gator Navy’s mini-carriers like the USS Wasp and USS Kearsarge — Mulloy said. That said, the Navy is planning on buying one more America-class large-deck amphib in fiscal ’17, according to Mulloy. “We maintain the large-deck amphib at the end of the [five-year defense plan] really for a Marine Corps need and a Navy need,” Mulloy said. “Those ships are tremendously valued to the Navy, around whether it’s at other bases or other events going on around the world.”