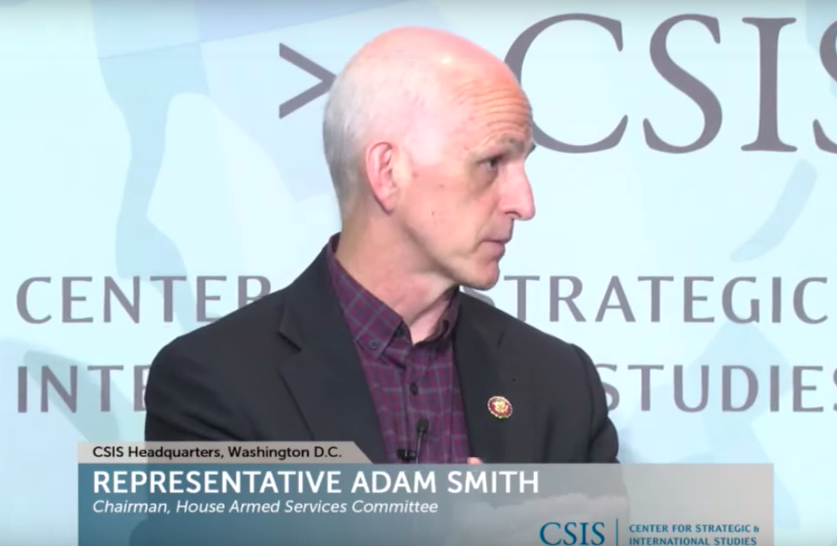 WASHINGTON: The House’s top Democrat on defense wants to focus more on the cyber and artificial intelligence technologies he sees as “really the future of warfare” and less on preparing for a conventional World War III. The draft defense policy bill headed for a full-committee vote tomorrow doesn’t entirely back that up. It:

The draft National Defense Authorization Act for fiscal year 2020 is “embracing new technologies and making sure we have enough money to fund things like AI and hypersonics and cyber, which is really the future of warfare,” House Armed Services chairman Adam Smith said yesterday at the Center for Strategic & International Studies. “We budget for, ‘ok, what if we have to go to war with China?’ Well, odds are we are not going to go to war with China — which is not to say we shouldn’t try to deter that possibility.

“But we are going to be engaged in a cyber fight with Russia and China and a lot of other places,” he continued. “That’s what’s really going to happen, so how are we funding that? How are we going to use artificial intelligence?”

Many experts have argued for years we’re already in a cyber fight, with Russia meddling in US elections while China steals everything from military schematics to federal personnel files to private sector trade secrets. AI and cyber are intimately intertwined, because for all the anxieties about letting AI pull the trigger on a lethal weapon, there’s no such unease about it killing computer viruses, and AI might be the only thing fast enough to catch intruding malware before it can wreak havoc. (Smith put more emphasis on cyber and AI than on hypersonics in both his CSIS remarks and his draft bill).

As Smith hinted, the bulk of the budget — $733 billion in his draft, compared to President Trump’s request for $750 — would still go to conventional military programs. But Smith and his staff made some new investments on the margins and made some significant decisions on policy as well. (While the appropriations committees approve the money, the armed services committees set the policy, which can restrict spending).

JAIC funding in the HASC’s draft bill for 2020, a major increase over 2019 but still $42 million less than the administration’s request.

The committee’s official summary of the bill declares it “Supports doubling the investment made by the Joint Artificial Intelligence Center in AI/ML” — but it also “control[s] un-executable, early-to-need cost growth.” That’s legislator-speak for not fully funding programs that either aren’t ready to spend all the money or don’t really need it all yet, at least in Congress’s estimation.

Now, if you look at the detailed funding tables in the bill proper, you’ll see that the administration requested $208.8 million for JAIC (as was widely reported) but the HASC draft only approves $166.8 million, cutting $42 million as “early to need.”

That’s still a huge increase, given that JAIC didn’t even exist 12 months ago, but when Congress decides to take something seriously, it doesn’t just vote more money: It also increases oversight. The bill text proper also calls for a biannual report on JAIC — that’s twice a year for those of us who can never remember the difference between biannual and biennial. The report that would “detail the status of the JAIC, its current staffing, hiring efforts, and investment priorities [and] how the JAIC is working with the military services, academia, industry, and international partners to develop and operationalize AI.”

On a wider front, the bill would also speed the acquisition of software in general. (AI is simply a specific type of advanced software). The Pentagon’s industrial age procurement bureaucracy has enough trouble staying on budget and schedule with traditional heavy-metal weapons, but it’s outright terrible with software, an intangible, rapidly advancing technology where what the military decides to buy is often obsolete before it can be delivered. There’s been a debate with the Defense Department for at least a decade over whether buying software requires a separate, streamlined process, with acquisition undersecretary Ellen Lord saying it’s necessary.

This bill, if passed, would settle the question decisively: Section 801 “would direct the Secretary of Defense to establish a new software acquisition pathway to procure, develop, deploy, and continuously improve software.” The next section would create specialized training programs in “software development and acquisition” for procurement officials.

The bill’s final push on the digital front is a series of cybersecurity initiatives, particularly to protect the Defense Department and its contractors from buying bugged equipment — a real worry with Chinese companies like Huawei. The draft bill would direct the Pentagon to make supply chain security part of the official requirements every new program needs to meet, to look for potential security vulnerabilities in all communications and surveillance systems with significant foreign content, and to help small businesses implement better cybersecurity.