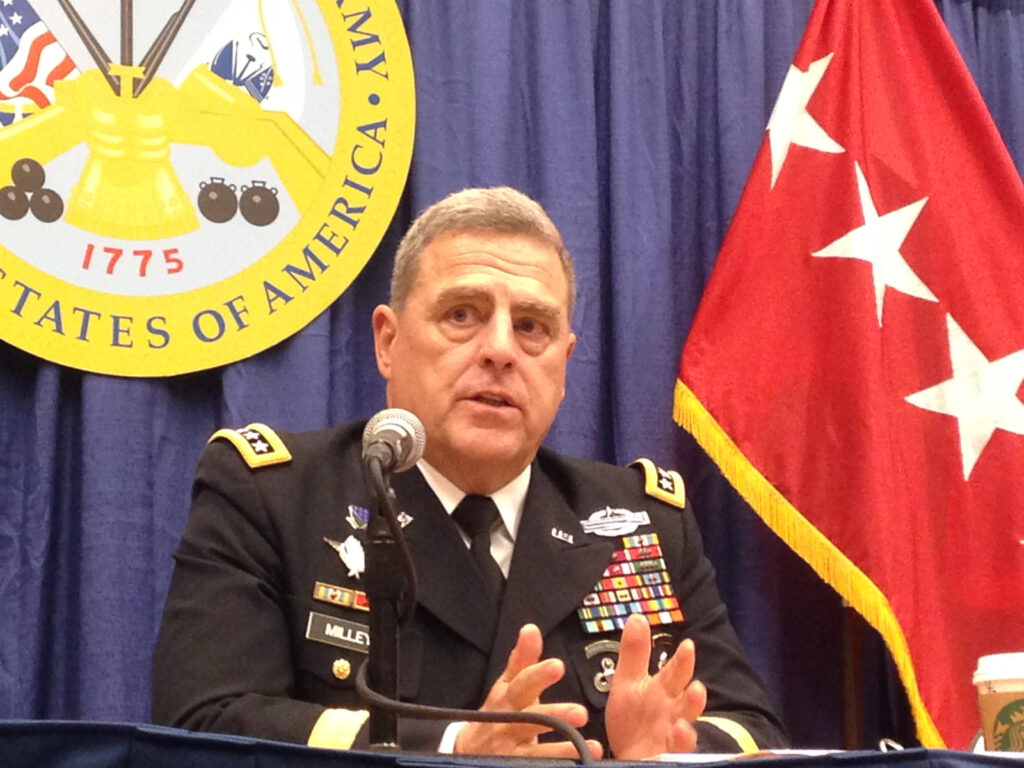 AUSA: The Association of the US Army’s annual meeting is a massive gathering of the US Army faithful. But in his first address to AUSA as the service’s Chief of Staff, Gen. Mark Milley made sure to avoid preaching only to the choir.

After the obligatory thank-yous and jokes, Milley’s first substantive statements were in praise of the Air Force and Navy. It is the air and sea services, he reminded his audience, who deliver the Army to the war zone and then support it in battle. Throughout his speech, he also made frequent nods to the National Guard and Army Reserve, who have felt increasingly slighted by and estranged from Army leadership for the last two years. While his statements today on the Guard and Reserve essentially summarized his speech a month ago to the National Guard Association of the US in Nashville — where Milley was very well received — it’s politically notable he made sure to repeat them for the largely regular-Army audience at AUSA.

What’s also notable is what Milley did not say. Defense contractors largely fund this conference (and most like it) with their displays of hardware; trade publications like ours focus on the rise and fall of programs. But Milley made only brief mention of modernization today, although developing the “future force” is one of his top three priorities as Chief of Staff, along with taking care of soldiers and their families.

Instead, Milley used his bully pulpit at AUSA to hammer relentlessly on the first of his three priorities: readiness. As budgets tighten, this speech signals that the new Chief of Staff will emphasize keeping units trained, equipped, and fully manned for combat — if necessary at the expense of developing new kinds of equipment, not that the Army has many such programs left after the cancellations of recent years.

At the same time, Milley shot down the idea that the Army is regressing to the bad old days of the 1970s, when discipline and training standards collapsed post-Vietnam. “We are not even close to being a hollow army,” Milley said. “But we can’t just say we’re going to be strong… we must constantly recommit ourselves to the readiness of our Army.”

In a forcefully delivered and at times intensely personal speech, Milley said that “in the dark of the night, all of us who led soldiers in combat, all of us who’ve been combat commanders, we all know the ghosts of our battles past. For me that number is 242. We see their faces and all of them speak to us from the grave.”

“Those ghosts, they remind us,” Milley said. “They remind us no soldier should ever die because they were not ready.”

Milley’s tribute to the Air Force and Navy was nearly as heart-felt. “I am personal witness to pilots who without hesitation will risk their all when they hear a call that ground troops are in contact. We may not like their football teams but we damn sure love the sound of their jets,” he said to loud applause.

That said, Milley made sure to emphasize that long-range bombardment by itself — without ground troops in contact — is rarely decisive. Iwo Jima was bombed and shelled for more than 60 days, he noted, killing only 300 of the 23,000 Japanese defenders.

“My father passed away a few months ago but he never forgot Iwo Jima,” said Milley, whose father was a Marine veteran of World War II. “He could tell you with certainty about the myth of winning battles or wars from the sea or air alone. But we see that same myth playing out today on our evening news, as we watch an ideologically committed enemy in ISIL withstand or even expand despite a year of pounding from the air.”

So if air and sea are not sufficient, what is the Army’s unique contribution to the joint force? That’s something the service has been struggling with for years, ever since the end of the long guerrilla struggles in Afghanistan and Iraq seemed to be in sight. (At this point, ironically, the end of US involvement on some level looks as far away as ever).

That’s a remarkably clear mission statement compared to some the “foundational force” has made in the past about its wide range of missions. It’s also a potentially alarming to those who remember the last time the Army decided to refocus on major wars after a protracted counterinsurgency, forgetting all the lessons of Vietnam in the process.

This time, “we must sustain our capabilities to fight terrorists, guerrillas, and insurgents, and to help our partners develop the increased capability to do the same,” Milley said. But in contrast to the last 15 years of counterinsurgency in the Muslim world, he went on, “we do not have the luxury of preparing to fight one type of enemy at one time in one place.”

Milley has repeatedly said that Russia — with its track record of aggression and its unique combination of a massive nuclear arsenal, conventional military, and deniable surrogates — is the greatest threat to the US. (By contrast, “China is not an enemy,” he emphasized today, and its behavior has been “assertive” but not “aggressive.”)

A nation-state like Russia is a very different kind of challenge from Islamic irregulars. It requires, for starters, much more mass: the kind of large standing land army with which American politics have always been uneasy and whose funding is currently under assault. The Army Reserve and National Guard will play a crucial role in keeping up the numbers, Milley said, and he will seek funding to make them readier for combat, but the regular active-duty force needs to stay robust as well.

“Even if we fully implement the initiatives I propose,” Milley said, “that will not be sufficient to offset the need for a a significant standing regular Army.” The problem is paying for it.