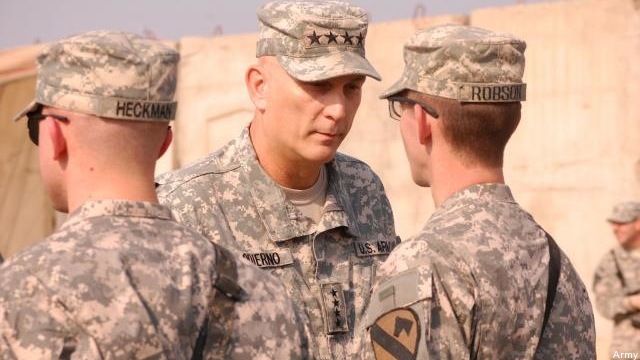 Washington: In his first speech as the Army’s new Chief of Staff, Gen Ray Odierno warned that large, rapid reductions to the service would put the nation at risk.

Odierno officially took the reins from former Army Chief of Staff Gen. Martin Dempsey, who is replacing Adm. Mike Mullen as the Chairman of the Joint Chiefs of Staff at the end of this month, during a ceremony yesterday at Joint Base Myer-Henderson Hall, Va.

During his speech, Odierno acknowledged that changes to the Army were inevitable, given the tough economic environment the service now finds itself in.

But if the service ends up “drawing down too fast and getting too small” those cost cutting measures could threaten to hollow out the force, according to Odierno. During his Senate confirmation hearing in July, Odierno said that despite any cuts, the Army would remain the definitive force in the U.S military in any future conflict.

But with many in DoD and on the Hill expecting troop levels within the services to drop much lower than what had been expected, with some anticipating a 100,000-man cut across DoD, the new Army chief of staff is wasting no time in making his case.

The Army is already mulling a plan to drop its number of Brigade Combat Teams from 45 down to 30, as a way to save service dollars.

The plan, which was hatched by Dempsey during his stint as Army chief, is also part of a longer-term portfolio review of the Army’s force structure and personnel, designed to generate savings within the service, Army Vice Chief of Staff Gen. Peter Chiarelli said last September.

However, the BCT cuts being considered now by Army top brass go far deeper than what Dempsey had originally anticipated, a source told me last month.

For his part, Dempsey said that any proposed plan to cut Army forces are still preliminary, and nothing has been finalized.

Speaking to reporters after officially handing over the chief of staff job to Odierno yesterday, Dempsey said the Army was working toward a “base force” figure, which would be the lowest number the Army could draw down to, while still being able to conduct its missions.

While declining to comment on which specific programs or personnel could be cut, as part of that base force, Dempsey said whatever that configuration ends up being will ensure the Army will not be hollowed out.

But some have noted that the era of the large-scale, ground combat intensive wars that is the Army’s bread and butter is now over. Critics cite recent U.S. and NATO-led operations in Libya as proof that conflicts can be won with little to no ground troops.

But the presumptive Chairman of the Joint Chiefs dismissed that notion, saying the circumstances surrounding the Libya operation was not indicative of any future conflicts the United States may find itself in.

While the U.S. could find itself in another Libya-type conflict, it is only of many possible scenarios the military will face in the coming decades, Dempsey said. And in all of those scenarios, the Army will continue to be the game changer, he added.