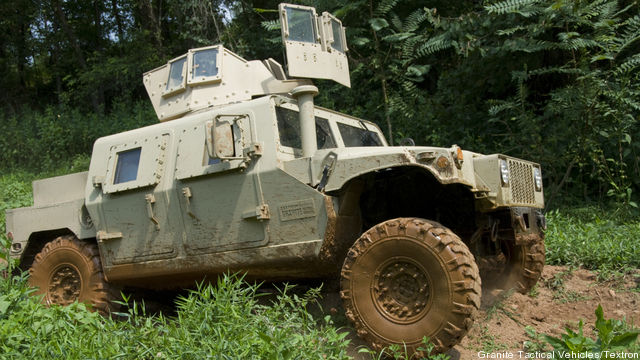 Mt. Airy, N.C. – Behind the cornfields and gravel pits in the hills of this small North Carolina town sits an off-road test track.

The two-mile trail, owned by defense firm Granite Tactical Systems, is where I put the company’s upgraded Humvee through its paces this week.

A Granite-Textron team is pitching their advanced version of the iconic Army truck as part of the service’s Modernized Expanded Capacity Vehicle program, designed to update the Humvee.

Before taking the reins of Granite’s latest offering, company president Chris Berman took me for a ride through the test track in a Gulf War-era Humvee.

With Berman behind the wheel, the legacy truck pitched, rolled and grunted its way through sections of the sprawling trail. He had to skip other parts of the track because the older Humvee simply could not take the abuse.

As we bounced and jostled our way through the course, I questioned whether the new Humvee could take this punishment, especially since Granite’s offering was 80 percent identical to the original Humvee.

The answer was surprisingly well.

After running the full course again, this time riding shotgun in a full-up version of the Granite Humvee, it was time for me to take the wheel.

After strapping into the driver’s seat, I and a company test driver took off to tackle the test track.

It did take some time to adjust – after all, driving a 4-ton tactical vehicle down a track designed to mimic the conditions in Afghanistan is not like driving your SUV to the local Safeway.

Once comfortable with the mammoth machine, I careened down passes just wide enough to handle the vehicle’s larger wheelbase (compared to the legacy Humvee) and into hairpin corners cut into the rocky, red-clay dirt. To my surprise, the truck turned almost effortlessly into and out of the corners.

I’d never driven a Humvee before but I was able to power the truck up and over large dirt mounds smoothly, only leaving V-shaped gashes in the tops of the mounds where the IED-resistent hull scraped the earth.

The revamped suspension designed by Granite — reworked to handle the greater weight of the additional armor — kept me somewhat oblivious to the beating the truck was taking while sitting inside the vehicle.

So far, the retooled Humvee had taken everything I had thrown at it. But that would not last for long.

Moving down a fairly tame straightaway on the course, the truck’s right front wheel separated from the frame, bringing my test drive to a sudden end.

As Berman and others gathered around assess the damage, the Granite chief was surprisingly calm.

Predicting (correctly, as I later found out) that the failure was caused by a faulty ball joint, Berman explained the break occurring at their test site was a good thing.

Granite engineers could now go back, find out what the cause for the failure was and design a fix that would make the truck better in the long run, he said.

And, Berman added, it was better to have the malfunction happen on a test track in North Carolina than on a mountain pass somewhere in Afghanistan.

As Granite mechanics got to work to get the broken Humvee off the track, I piled into the driver’s seat of the second truck they had brought, to finish my run.

The second half of the test drive went well. The Granite truck ate up every obstacle and moved through the rough terrain with ease.

Unclipping from the five-point harness and jumping out of the driver’s seat after my test drive, I checked the vehicle out. It looked like it had been through hell.

Some have questioned the Army’s decision to redo the Humvee, wondering aloud whether the service and DoD would be better off with something truly new. After all, the Humvee is already so wide there are places it can’t go, especially in some of the world’s older cities.

But if the other competitor’s offerings for the MECV program are anything like the Granite-Textron truck — assuming the ball joint gets fixed or was a one-off failure — the Army may be well pleased with the Humvee’s next generation.