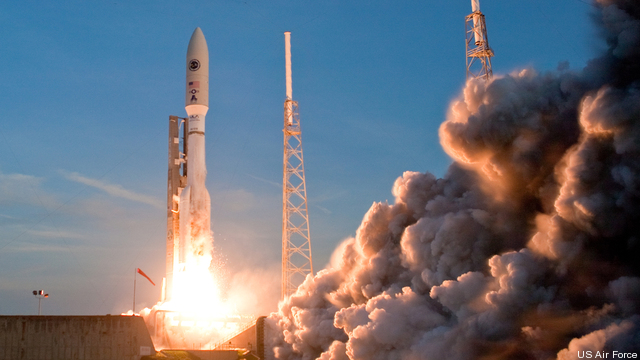 WASHINGTON: The Trump administration’s proposed Space Force could end up not making much of a dent in the Pentagon’s overall annual budget, but if space operations were split from the Air Force, the service could lose a whopping $11 billion in annual funding, a new independent analysis concludes.

While standing up a new Space Force would run between $11 billion and $21 billion per year — depending on how vast the restructuring is — the vast majority of that money — 96 percent — is already being spent by the Pentagon to run space operations, according to an analysis released Monday by budget expert Todd Harrison at the Center for Strategic and International Studies.

In all, the new costs would likely run be between $300 and $500 million per year, an outlay that would buy “a couple of F-35s,” Harrison said Monday, or roughly about the $413 million the Pentagon spent on its first-ever audit — which it failed — this year.

Harrison was quick to point out that his estimate didn’t take into account costs associated with classified space work, such as those run by the National Reconnaissance Office. Those activities may or may not be folded into the Space Force, but they wouldn’t necessarily mean new costs.

Over the first five years of its operation, the Space Force would demand somewhere between $1.5 to $2.7 billion in new spending not already on the books, the analysis concludes, a far cry from the Air Force’s recent $13 billion estimate. The paper is more in line with with Deputy Defense Secretary Patrick Shanahan’s statement last week that it would likely be in the “single digits” of billions of dollars, and “could be” lower than $5 billion.

“I don’t think that cost should actually be that much of a factor in their decisions,” Harrison told reporters. “I think a bigger factor is whether or not you think it is needed, and I mean, that’s what the debate should be about.”

Harrison had earlier called the Air Force’s $13 billion number “an example of malicious compliance,” since the service has been opposed to the idea and the number was based on huge assumptions that the service didn’t explain very well. On Monday, he told reporters that he stands behind that position. “They were not asked to produce that cost estimate and they did it with the largest possible scope without sufficient caveats to let people know that it was much more than the cost of the Space Force.”

During the Defense One conference last week, Air Force Secretary Heather Wilson defended the maligned $13 billion number, saying “what we put forward was in the cost estimates to implement a stand-alone department,” while they wait for the White House to deliver a plan to Congress for the fiscal 2020 budget. “Our cost estimate that we gave to a lot of people in the Pentagon in September was the cost of a fully fledged stand-alone department and also a unified combatant command.”

The range in cost between Harrison’s three options represent a range of likely ambitions for the force.

The Space Corps is essentially the 14th Air Force, which conducts the space mission for the service now. Units that would transition to the Space Corps include:

This option calls for about 27,000 personnel and would cost about $300 million in new funding each year.

The second option would include that and add the the Army’s 1st Space Brigade, the Navy Program Executive Office Space Systems, and the Navy Satellite Operations Center at Naval Air Station Point Mugu. It would also suck in Army and Navy personnel supporting Air Force Space Command. This plan would include about 35,800 uniformed and civilian personnel and run the Pentagon $400 million in new cash outlays annually.

The last option, which Harrison referred to as Space Force-Heavy, includes all this plus the Army’s 100th Missile Defense Brigade that operates Ground-Based Midcourse Defense systems in Alaska and California, as well as parts of the Missile Defense Agency that relate to space sensors. This menu option calls for 48,500 personnel and would run approximately $500 million more per year than the Pentagon currently spends on these missions.

The “heavy” option, notably, would require roughly the same number of personnel as the Coast Guard, but cost double the sea service’s budget. (Of course, they don’t build rockets or satellites or operate them.)

In the end however, Harrison pointed out that his relatively low estimate for new funding shouldn’t come as a surprise, since “all the functions that Space Command would take over, those functions are being done today in STRATCOM.”