New START’s Death May Up Costs of Triad Modernization 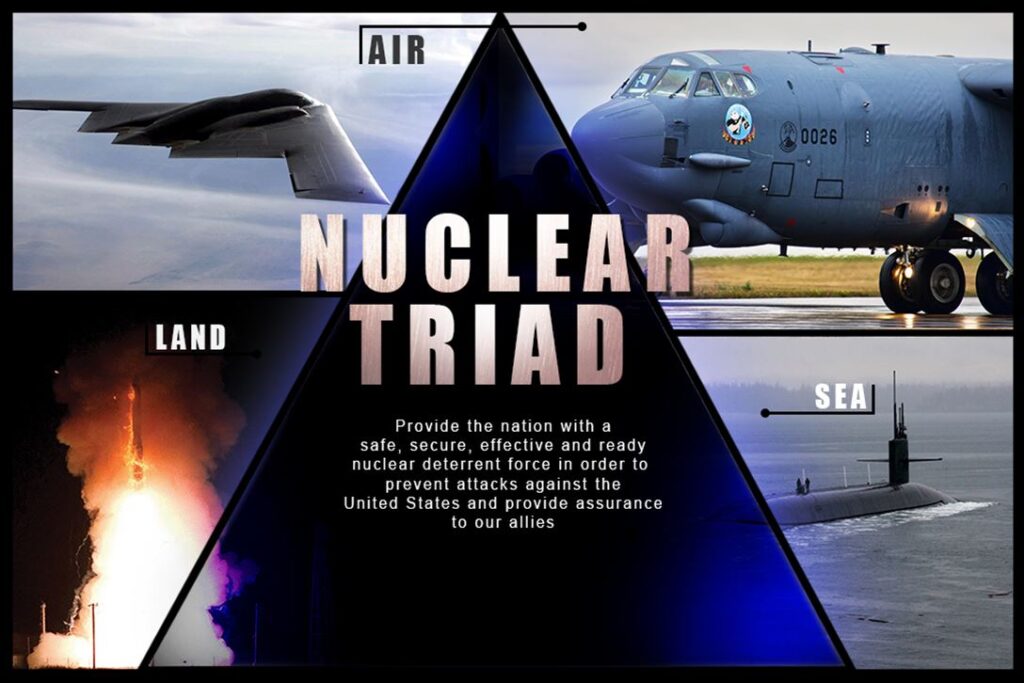 WASHINGTON: DoD will be forced to reconsider its modernization programs for the nuclear triad if the Trump Administration decides not to extend the New START nuclear weapons treaty with Russia — something that worries Pentagon leadership, experts say. Not only could the treaty’s expiration in 2021 result in increased costs, it could also necessitate changes in the mix of bombers, submarines and ground-based missiles — or in the mix of nuclear and conventional weapons they carry.

Retired Lt. Gen. Frank Klotz, who commanded Air Force Global Strike Command and served in the Obama Administration as the Energy Department’s undersecretary for Nuclear Security, told the Mitchell Institute for Aerospace Studies yesterday that if the Trump Administration felt forced to expand the modernization program “because there were no longer any constraints on the Russian programs,” that would raise the costs of the already costly effort. He added that “one of the things that concerns [US military leaders] is: without these constraints, what would the costs be and how viable would this modernization program that we so carefully laid out be?”

“The New START treaty limits … are baked into the US nuclear modernization program,” he explained. DoD’s current plan for “the three legs of the triad, the systems associated with them and nuclear command and control … basically is a one-for-one replacement of existing systems — a little more here and a little less there … .”

The Congressional Budget Office (CBO) in January estimated the price tag of the Trump Administration nuclear modernization plan — including both DoD delivery systems and DoE warhead and infrastructure updates — at a whopping $494 billion between 2019 and 2028. For those of you not so good at math, that is an average of just under $50 billion per year. The cost of just  DoD’s strategic delivery systems and the DoE activities to provide the warheads and the nuclear power plants for the Navy’s SSBNS will be $234 billion over that period, CBO said. (In a 2017 study, CBO said that the 2017-2026 cost would be $400 billion and the 30-year cost of the program would hit $1.2 trillion. That’s an increase of 23 percent, much of which is simple inflation.)

Madelyn Creedon, former principal deputy administrator of the National Nuclear Security Administration, said that in a post-New START world, the US might want to change the balance between the legs of the triad. According to the Federation of American Scientists’ Nuclear Notebook, the US currently maintains: 400 Minuteman III ICBMs, which are to be replaced under the Air Force’s Ground-Based Strategic Deterrent (GBSD) program; 14 Ohio-class ballistic missile submarines being replaced by the Columbia-class subs starting in 2021; and 20 B-2A bombers along with 87 B-52H bombers. Or, she said, DoD might want to shift around how many warheads are carried on what platform depending on what force structure the Russians developed.

Another nuclear weapons expert suggested after the meeting that the US might also need to reconsider whether some bombers and/or submarines would have to give up conventional missile launch capabilities in order to beef up nuclear capacity — something that neither Air Force nor Navy leaders will be happy to do because they can actually use conventional weapons in most conflicts.

In any event, Creedon said, the critical question would be: “What is it we want to hold at risk, what really is the threat? Because [an increase in Russian weapon systems] may not be an increased threat — it may be just more numbers. It’s way more complicated than just saying if they go to 250 and we have 212, we have to go to 250.”

The Trump Administration has been waffling on whether it will pursue a five-year treaty extension (that does not require Senate ratification) with Moscow. Instead, President Donald Trump has ordered his staff to begin work on a possible new trilateral nuclear arms control treaty that would include China — as well as cover sub-strategic weapons (of which the Russians have more than the US) not now covered by New START. Never mind that China for many years has refused to enter into nuclear arms control talks until Russia and the US reduce their arsenals to equal China’s some 300 warheads. Or that the Russians have said they will only trade sub-strategic weapons away if the US moves its nukes out of Europe and puts significant limitations on deployment of missile defenses — both conditions that the US would most certainly refuse.

Indeed, National Security Advisor John Bolton — who has never met an arms control treaty he didn’t hate — has said the White House probably will not extend the treaty, which it the only extant bilateral arms control treaty that limits the number of US and Russian strategic nuclear warheads and delivery systems. Arms control advocates, therefore, have accused the administration of using the proposed trilateral talks as an excuse to scrap New START.

Russia, the other nuclear expert said, has open production lines for several types of nuclear weapons systems whereas the US does not.

Klotz also suggested that the arguments by those supporting abandoning New START and withdrawing from the 1987 Intermediate-Range Nuclear Forces (INF) treaty about the current threat from non-controlled Russian “exotic” weapons — such as the Poseidon nuclear-powered torpedo or hypersonic cruise missiles — are overblown. None of these Russian-media reported systems (some reports being more believable than others) likely will be deployed by 2026, when New START disappears for good and a new bilateral treaty will need to be negotiated anyway. So, he said, “it’s kind of a moot point.”

“What are the strategic implications of some of the exotics?” he added. “Do they really change the fundamental deterrent relationship — the relationship that provides for strategic stability — where both the United States and Russia can retaliate against nuclear aggression in a manner that raises the costs far above the benefits of doing so in the first place?”

Meanwhile, the Trump Administration is doing battle on funding for nuclear weapon systems with the Democratic House as it takes up the 2020 National Defense Authorization Act (NDAA) this week. In a July 9 Statement of Administration Policy submitted by the White House to the House Rules Committee, the administration pushes strongly back at House Armed Services Committee (HASC) cuts to the GBSD program. It also objects mightily to the HASC move to block all funding for a new, low-yield nuclear warhead for the Trident missile submarines.