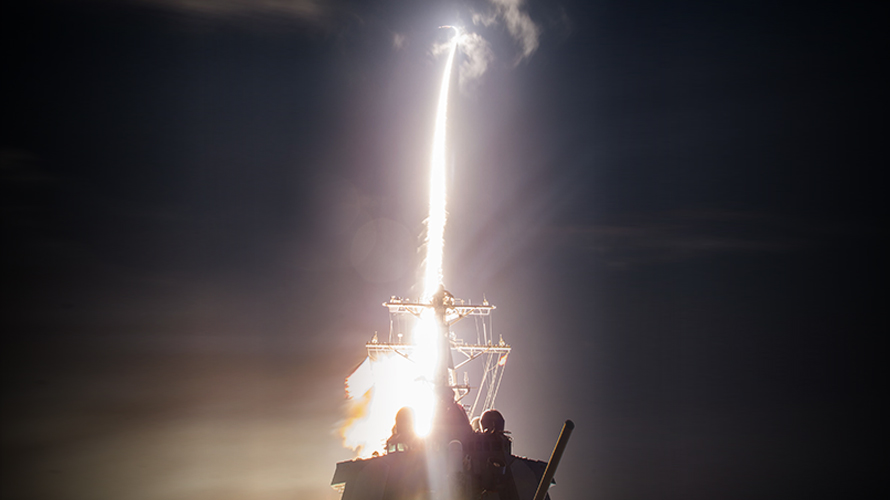 WASHINGTON: Raytheon is hoping to wrap up several multi-year contracts for the Standard Missile 6 and SM-3 Block IB interceptors in the coming weeks, deals that would give the industrial base some stability and lock in production pipelines for missile interceptors at a critical time as North Korea and Iran test new medium-range ballistic missiles.

Forging a multi-year deal “allows us to do strategic planning beyond this effort in a different way than we had before,” said Mitch Stevison, vice president of Raytheon’s Strategic and Naval Systems segment. “It also allows us to look deeper at the next evolution to more efficiently spend our internal research and development dollars to develop new capabilities” not available under year-to-year contracts.

Just as important, it allows the company to “present a stable supply chain perspective to teammates that they would not ordinarily have in previous production.”

The issue of steady supply chains is something the Pentagon had viewed with increasing concern, given the increasing commercial opportunities for parts suppliers and the frustration some have felt over the past decade of uneven defense work.

Stevison told me that given the growing number of companies working on space programs, there are more opportunities for second and third-tier suppliers that at any point in the last several decades. “They have choices. A handful of suppliers in some cases are choosing commercial over defense, though those are very small in number, but it is something that is out there.”

The SM-3 Block IIA interceptor, a joint venture between Raytheon and Japan’s Mitsubishi Heavy Industries, is slated to be a key part of both the Navy’s ballistic missile defense system as well as the Aegis Ashore ground facilities located in Romania and Poland — and soon Japan.

The new interceptor, with longer range and more precise sensors than its predecessors, uses brute force — the power of a 10-ton truck traveling 600 mph — rather than an explosive warhead to destroy its target in a classic example of intercepting a bullet with another bullet.

But the IIA has had some surprises for its makers, and has led to some controversy on Capitol Hill.

Originally designed to intercept medium-range ballistic missiles, early tests revealed to engineers that the new, more sensitive seeker on the IIA allowed it to operate against more sophisticated threats than had originally been envisioned, so they began pushing what they had previously thought possible.

That excited Congress, which in 2018 called for a test against an intercontinental ballistic missile in 2020.

But the House version of the 2020 defense policy bill stripped $42 million from that effort, while calling for another test of the interceptor against an intermediate range ballistic missile. Earlier this month, the White House objected to the changes demanded by the House, arguing the re-scoping “would add little technical value,” as the Missile Defense Agency already successfully tested the IIA against an intermediate range missile in December 2018. The House and the Senate will hash out a compromise when they go to conference committee once they return from August recess.

The fact that the ICBM test was even on the books, however, is considered a win by Raytheon. “One of the things we’re most proud of there is that DoD was able to see that the inherent capability was built into the missile already, with no new development costs,” Stevison said.

With or without the test, Raytheon and Mitsubishi Heavy Industries are forging ahead with the IIA program, spurred on not only by continued missile threats from North Korea, China, Russia, and Iran, but also by new classes of ships, and ground launchers, that will one day employ the interceptor.

The Pentagon’s 2019 Missile Defense Review envisioned a big role for the IIA, saying that while the interceptor will be part of a regional missile defense architecture, it also has the potential “to offer an additional defensive capability to ease the burden on the [Ground-Based Interceptor] system and provide continuing protection for the U.S. homeland against evolving rogue states’ long-range missile capabilities.”

On July 24, North Korea fired off two short-range missiles that landed in the Sea of Japan. One of the missiles, some analysts said, is likely a new variant capable of flying flew very low to the surface at high speeds, suggesting it could present a first-strike threat. Japan’s investment in the program is part of a much larger Japanese push to beef up its missile defense systems in the face of North Korean and Chinese threats, which include thousands of medium-range missiles China has built in recent years.

By 2021, Tokyo also plans to have eight Aegis destroyers at sea — including two brand new Maya-class destroyers, the first of which is set for delivery in 2020 — four of which will be capable of launching IIA missiles. Last September,  a Japanese Atago-class destroyer successfully knocked down a mock ballistic missile off the coast of Hawaii using an SM-3 missile. That test came about a month after Tokyo announced it would buy two Aegis Ashore systems for $1.2 billion, which would be the third and fourth Aegis Ashore sites, joining facilities in Romania and Poland. All of the sites will be capable of deploying the SM-3 Block IIA missile.