No Win In Syria: We’ll Be Glad To Keep Assad 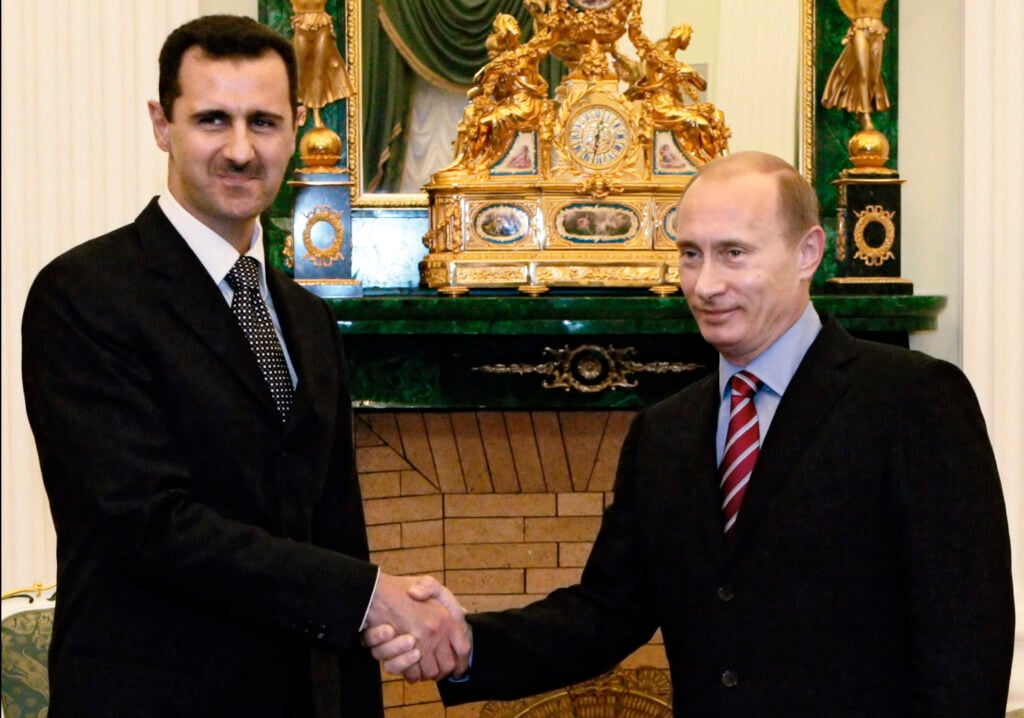 It seems just like old times: the Turk is back in the Levant, Aleppo is under siege, and the ikhwan (Muslim Brotherhood) is dispensing justice.

When did it all go wrong?  When the Americans decided the stuttering ophthalmologist wouldn’t play rough like his fighter pilot dad had. As Donald Trump would tweet: Sad! Sadder still is Bashar’s death toll: about 400,000 compared to the 25,000 his father, Hafez Assad, killed in putting down the Muslim Brotherhood uprising in Hama in 1982.

Why? The Americans, led by President Obama and then-Secretary of State Hillary Clinton, decided Syria could be split from its Iranian patron and thus deal a defeat to the Islamic Republic. In 2010, Israel and Syria had back-channel talks that reportedly included Israel’s return of the Golan Heights to Syria in exchange for security guarantees. The talks slowed due to mutual suspicions about the other side’s ability to deliver and, by early 2011, the Arab Spring erupted across the region and leaders’ attentions turned to more immediate concerns.

At this point, America’s only option to move against Iran was the outright defeat of the Assad regime, so that became the policy. In 2011, Turkey provided a home for the opposition Syrian National Council and, in August 2011, the U.S., its allies, and the UN were calling on Bashar Assad to step down. Assad, not surprisingly, decided against early retirement and we were off to the races… 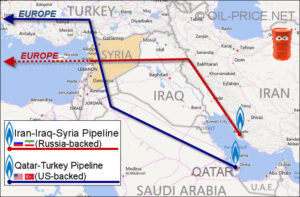 So that’s the reason, huh?  Well, not all of it.  It’s also about a pipeline. Qatar supports the Syrian opposition, not because it thinks people should have a say in their governance — they certainly don’t in Qatar — but because it needs a Syria run by pliable leaders responsive to Qatar’s interests. Why? Qatar is a leading natural gas producer and it wants a pipeline straight to the large natural gas market of Europe. Currently, Qatar’s current gas travels by Liquefied Natural Gas (LNG) tanker, mostly to Asia, or the Dolphin pipeline to the United Arab Emirates and Oman. The 1500-mile pipeline route would head north and land in Turkey after crossing Saudi Arabia, Jordan and Syria. But Syria declined Qatar’s offer in 2009 and instead agreed to a pipeline stitch-up with Iran and Iraq.

The Saudis fared no better in 2013 when they tried to get the Russians to drop their support for the Syrian regime, forgetting that Russia and Syria have had close relations since 1944. Prince Bandar bin Sultan, the then-director general of the Saudi General Intelligence Directorate, pitched Vladimir Putin but the result was “no sale”, even when Bandar dangled $15 billion in arms sales combined with substantial investments in Russia. You can understand the Saudi’s bewilderment: this always worked in the U.S.!

And no one bothered to ask if there wasn’t something wrong with two Wahhabi monarchies funding insurrection in a secular, though authoritarian, state.

Could this have been avoided? Maybe. We have to look back to December 18, 2011, when the last U.S. troops left Iraq and Presdient Barak Obama satisfied his wish to be the not-George Bush. The Iraqi army had no one setting an example for it or stiffening its spine in 2012 as the Islamic State of Iraq (later rebranded as Islamic State of Iraq and the Levant) made its play for power in Iraq. Mosul fell and the rest followed.

In Syria, the U.S. went out of its way to look feckless by warning the regime in 2012 about a “red line” it had better not cross, then standing around with its hands in its pockets after the regime attacked the opposition-held town of Ghouta with sarin gas in 2013.  Why? Obama’s desperate need to secure a nuclear deal with Iran. The Iranians told him they would cancel the talks if he punished Assad for Ghouta, so 1,300 men, women and children were asphyxiated.

The U.S. failed to prioritize. It attacked Libya ostensibly out of a concern for human rights abuses but also because its European “allies” hadn’t bothered to buy enough ordnance and asked the U.S. to help. This is the Libya that had surrendered its nuclear and chemical weapons programs and was no threat to Europe or the U.S.; it was just a big gas station for Europe. It wasn’t a useless exercise, though: the Iranian and North Koreans noted what happens to regimes that surrender their nukes. Then it was on to Egypt where the U.S. administration supported the Muslim Brotherhood because…well, it did.

Luckily, the Egyptian army later staged a coup and saved the day, but the U.S. and Egypt were left with a weakened relationship which the U.S. further damaged by delaying the delivery of attack helicopters and fighter jets.

After these serial failures, came the uprising in Syria, where the U.S. has a far greater strategic interest, given the malign Iranian influence in the area and the threat to neighboring countries friendly to the U.S.: Jordan, Iraq, Lebanon, Israel and Turkey. If there was a place that needed U.S. involvement on Day 1, Syria was it, but the president waffled, apparently concerned that weapons might get in the wrong hands, mistaking a symptom for the cause.

The U.S. failed to act promptly and decisively and the vacuum eased Russia’s reentry to the Middle East, 40 years after Nixon and Kissinger marginalized the Soviets in the region. What Obama calls a “regional power” is the prime mover in the region most important to the security of the U.S. and Europe. So what does it matter that Russia’s power is “regional” if it’s in the most important region? Meanwhile, China has taken advantage of the instability to declare its support for Damascus.  Not only that, but Russia has connected with Iran and Turkey who are opposed to all or much of U.S. policy in this conflict. It took some doing, but the U.S. managed to maneuver a NATO ally and two veto-wielding members of the UN Security Council to the opposing side.

This is a war unlike others in recent times. War drives innovation and every war introduces the public to a new weapon: in the war for Kuwait it was precision-guided munitions; in Iraq it was the IED. In Syria, the weapons innovation isn’t chemicals or barrel bombs; chemicals are so twentieth century, and anyone can do a barrel bomb.

The brilliant act of the Syrian civil war is the use of refugees as a weapon. This is the Mariel boatlift on a transcontinental scale: one million refugees from West Asia to Western Europe.  Bashar got rid of anyone who refused to fight or get out of his way and — if he survives — he won’t be welcoming them back. Assad took the tactical advantage, but the strategic winner is his patron, Vladimir Putin, who appreciates the negative political, social, and fiscal effects the refugees have on Western Europe just when he is planning a move. Those bases in Syria are great, but an inward-looking, destabilized Europe that is reluctant to meddle is priceless.

What next for Syria? Bashar Assad says he’ll liberate “every inch” of Syria, but a wiser move would be to carve out a new “Skinny Syria” from the present border at Israel, Lebanon, and Jordan, running north to the east of the transport hub at Homs, east of Lake Assad, to the border with Turkey. Let the jihadis have the interior; it’ll keep the army busy instead of plotting against the regime. Secure the coastline in the event the Eastern Mediterranean oil and gas fields extend beyond Lebanon and Cyprus. If you find hydrocarbons, your new pals at Gazprom and Rozneft will have some ideas.

Russia is in the mix, but it’ll support anyone who will guarantee it secure bases on the Mediterranean. Turkey’s Pasha is looming and can cause trouble but he has purged his army and may have stunted his ambitions to skirmishing with the Kurds.  Iran would have been a factor in any scenario, but the Syria civil war has allowed it to sharpen its skills in fighting and subversion, and it has been an opportunity for Hezbollah to learn to fight in larger military formations – a skill it will use against Israel at the earliest opportunity. On cue, Iran has promised to eradicate the Jewish state in 23 years with its newly formed Shi’ite Liberation Army. The only good news has been significant Hezbollah casualties: 1,600 dead and 5,000 wounded. In any case, more bad times are ahead for civilians in Israel and Lebanon. And the U.S. will remain fully engaged in the region, securing its own interests and shoring up allies under its new policy, Pivot from Asia.

“Strategic patience’ is a 10-dollar way to say, let’s not get involved. In this case, though, it might be the best option if America can stop obsessing about forcing a political transition in Syria. If Assad can see off all comers, let him stay. Those Saudi- and Qatari-funded aspirants may not be an improvement, and a post-Assad vacuum may turn Syria into another Libya. And there’s no reason U.S. troops should work for the Wahhabi monarchs, who have spent lavishly on military equipment but seem unable to use it to any effect.

The American people and fisc aren’t ready for another round of nation-building in Syria, but I have some candidates for the job: Saudi Arabia, Qatar, Russia, China, and Iran.  They seem to think the Syria enterprise is worth the effort, so they should pay for the reconstruction.  If they do that, we can be assured that, given their levels of corruption, most of it will be wasted or stolen, severely damaging their reputations.  Not good for Syria, true, but it will blacken America’s enemies and frenemies, and will keep a generation of investigative reporters fully employed.  And while they’re at it they can fund the cost of 5 million Syrian refugees in Jordan, Lebanon, and Turkey, or maybe allow the refugees to settle in their countries.  They won’t of course, but a relentless and public U.S. push on resettlement could collect concessions on other matters.

There’s no “win” here for the U.S. The administration should cut its losses and focus its refugee support on Jordan and Lebanon: these friendly countries already host 2.5 million Palestinian refugees, at some hazard to their stability, but they don’t have the power so they are stuck with the human detritus of another war.

James D. Durso, a retired Navy officer, is managing director of Corsair LLC, a supply chain consultancy. He was a professional staff member on the 2005 Defense Base Closure and Realignment Commission and the Commission on Wartime Contracting in Iraq and Afghanistan.